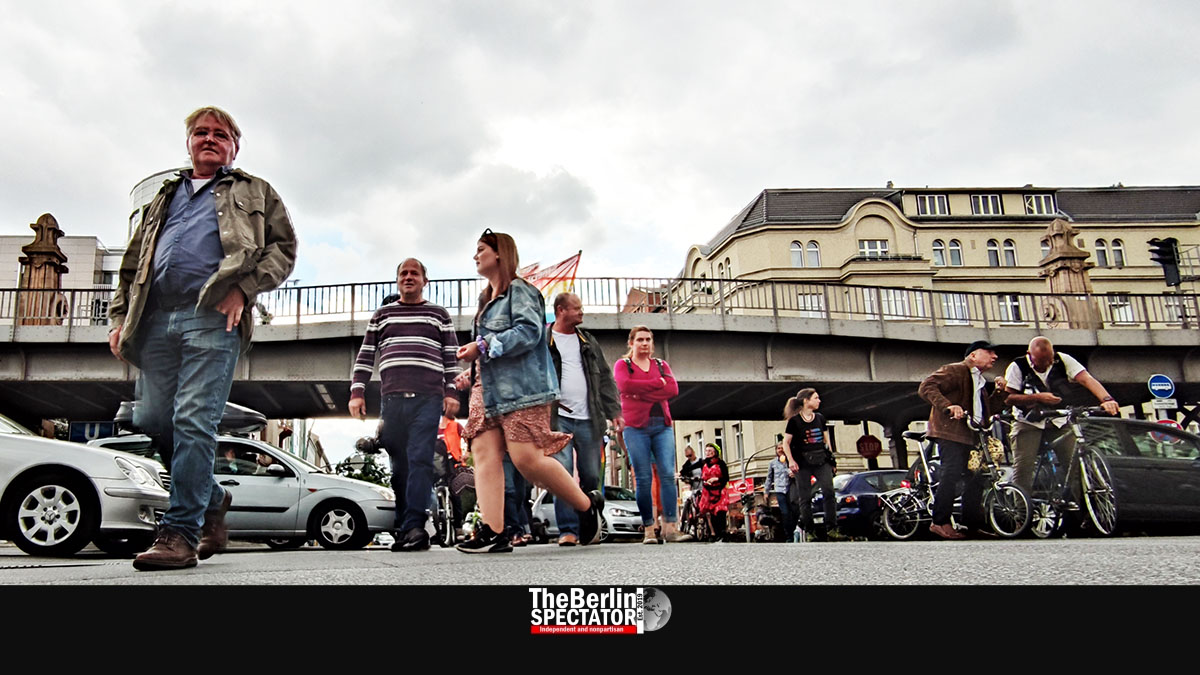 In Berlin, the discussion about the illegal protest staged by conspiracy theorists on Sunday has not ended. More information about the events that unfolded in the city is now available.

Berlin, August 3rd, 2021 (The Berlin Spectator) —  One and a half days after Corona deniers took to the streets even though their protest had been banned, the Berlin Police Department sent out a detailed review of what happened, from its perspective. The police was supposed to prevent several rallies from taking place after they had been banned. On Saturday, they successfully did so, but on Sunday, when more and more conspiracy theorists from all over Germany started protesting, they were obviously overwhelmed.

More than 2,200 police officers were on duty on Sunday. The Berlin Police was enforced by officers from Mecklenburg-Hither Pomerania, Saxony-Anhalt, Lower Saxony, Baden-Württemberg, Bavaria and Hesse. With these numbers, the police did not manage to control the situation in Berlin, when some 5,000 Corona deniers and other protesters without masks marched through the streets, demanding peace, freedom and democracy in a state which has peace, freedom and democracy, and an end to the Corona restrictions the country got rid of weeks ago.

On Monday, Berlin’s Interior Senator Andreas Geisel disputed the police had lost control. He told the ‘Tagesspiegel’ daily, they had acted “appropriately and professionally”. Geisel said the police had known the protesters would appear at many locations in the city “in small groups”. The officers had had trouble differentiating between protesters and passers-by. In his interview with the ‘Tagesspiegel’, the Senator asked a rhetorical question: “Should the police have surrounded and arrested 5,000 people?”

This highlight the dilemma the police were in on Sunday. They had to prioritize, meaning they obviously had no alternative but to step in at some of the spots where things went south. The number of arrests, 950, shows the police were active indeed. At least 60 officers were injured, some of them badly. This shows whom and what they were dealing with. On several occasions, they had to use force to defend themselves and other individuals. Stopping the crowds from protesting was just not possible.

The information provided by the Police Department shows where the situation escalated. It happened on Reichsstrasse, where a number of demonstrators blocked an intersection using a tour bus. The crowd on site quickly grew to 2,000 people while more protesters were gathering elsewhere in the city. But all of this still does not explain why thousands could march through Berlin’s Charlottenburg and Schöneberg boroughs for hours without any police escort. The fact that nobody stopped the traffic led to dangerous situations.

At the same location, Reichsstrasse, a television team was harassed by up to 40 conspiracy theorists. Police officers rushed to the scene and protected the journalists. When a representative of the German Journalist Union was attacked by protesters, he was saved by passers-by. Later, the Berlin Police Department launched an investigation into this and many other incidents.

On several occasions, the officers on site had to push renitent protesters. They were forced to use pepper spray and their clubs when they were attacked. The Berlin Police Department’s water cannons were not activated, but participants of the illegal rally were threatened they might be used if they did not leave the location around the Victory Column. Another success the police scored: They made sure the crowds did not reach Potsdamer Platz, a major square with a huge intersection. Whether this matters at all, considering the fact that the protesters reached many other spots in Berlin and disrupted traffic all over the capital, is another question.

But they definitely defended the government quarter. In August of last year, participants of a very similar rally had broken through a police barrier and almost entered the Reichstag building. This is not supposed to happen ever again. A considerable number of police officers was stationed around the Reichstag and the Chancellery, for that reason.

About two thirds of the 950 arrested individuals were not from Berlin. Hundreds of legal proceedings were initiated, mainly because of resistance against police officers or attacks against them. Many other offenses were listed, including the failure to adhere to the Corona rules.

The illegal Corona denier protests, and especially the Berlin Police Department’s strategy, is still being discussed. After the summer break, the Berlin House of Representatives will likely look into the matter.

Schwäbisch Hall: A True Marvel in the South