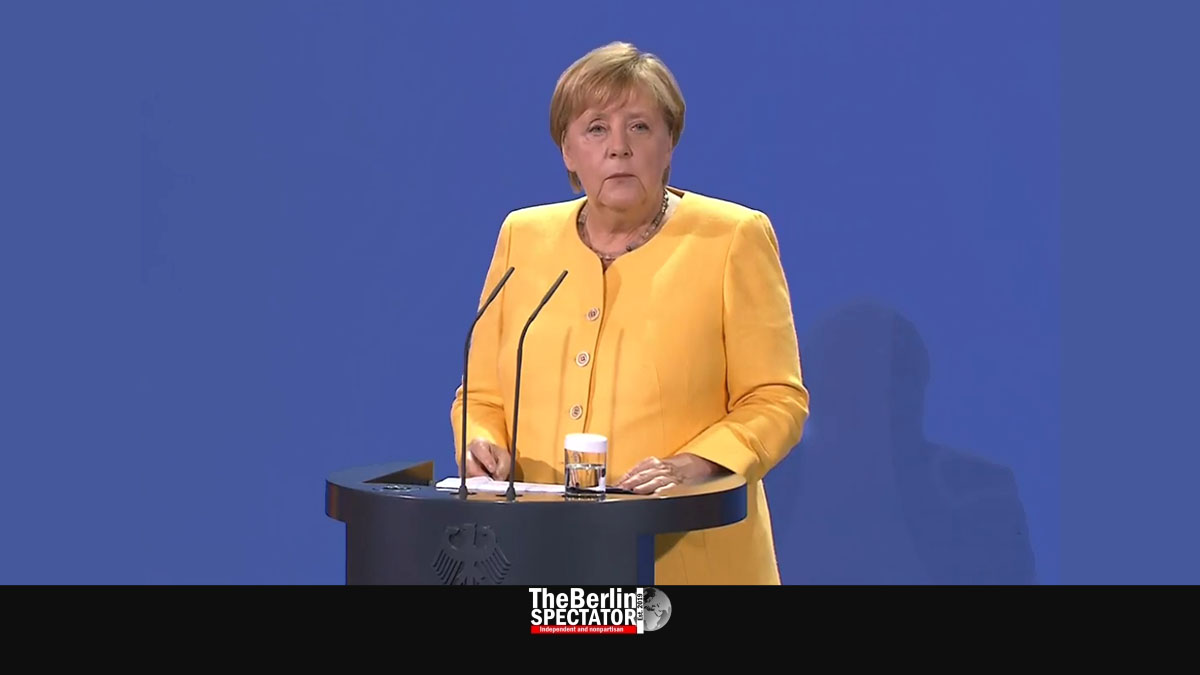 Angela Merkel conceded the mission in Afghanistan had not been successful. She said everything needed to be done to take people to safety. They include embassy staffers, but also local helpers and employees of aid organizations.

Berlin, August 17th, 2021 (The Berlin Spectator) — In Berlin, Angela Merkel commented on the situation in Afghanistan, where the Taliban are already controlling Kabul after the United States of America and their allies, including Germany, pulled out. Footage from the airport in Kabul showed thousands of Afghans who had climbed fences and walls to get in, with the intention of fleeing the country. Some died trying, when they fell from aircraft they had clung onto.

“We shall never forget those who gave their lives in Afghanistan”, Merkel said. Fifty-nine German soldiers and many others from other nations died during the military operation there, the end of which led to today’s chaotic and dangerous situation. While the Taliban are recapturing the country again, the West is trying to fly out its citizens. Angela Merkel said everything had to be done “to take our people to safety”.

She did not only refer to German nationals, but also Afghans who had worked with them, including locals who had cooperated with the Bundeswehr, Germany’s armed forces, and the police. According to the Chancellor, 1,900 of them are already in Germany or at least in safety, outside Afghanistan’s borders, but hundreds of persons, including local helpers and employees of aid organizations like the GIZ and NGOs still need to be flown out.

By now, the first German Air Force could land and fly out people from the airport in Kabul. Before, it had been forced to circle above Afghanistan’s capital because of the difficult situation at the airport. More evacuation flights are expected to take place. Angela Merkel said there was a close cooperation with the U.S. and Turkey, the two nations that are trying to control things at the airport. The Chancellor said she had spoken to her French colleague Emmanuel Macron. She announced there would be a close German-French cooperation in regard to the evacuation operation.

Mrs. Merkel also stated she had informed the chairpersons of all parties that were part of the Berlin Bundestag, about the situation in Afghanistan and the government’s plans. They would be informed about the latest developments again today. Tomorrow, the cabinet is supposed to discuss the way ahead and take decisions. Next week, the Bundestag is supposed to give the government a mandate for the evacuation retroactively. The law allows this kind of approach in cases of emergency. According to the Chancellor, Germany and Europe also need to help Afghanistan’s neighbors since many refugees will cross the borders.

Almost twenty years after the beginning of the military operation in Afghanistan, and shortly after its end, Angela Merkel conceded things had not worked out as intended. The efforts that had been put into the mission had not been successful, which was a “bitter realization”. Lessons needed to be drawn from the operation. Angela Merkel added that, in Afghanistan, Germany could not act autonomously. It all depended on decisions taken in the U.S..

On Monday afternoon, Foreign Minister Heiko Maas conceded Germany and its partners had evaluated the situation in Afghanistan inaccurately. He said the allies had expected the Afghan military to confront the Taliban. It was very painful to watch the footage from Afghanistan, Maas stated. He was referring to the chaos at Kabul’s airport, where at least seven persons died since Sunday. The German government now intended to “save as many people as possible from this situation”, Maas stated.

The Foreign Minister said the circle of people who needed to be evacuated from Kabul had been extended. Employees of NGOs and activists including campaigners for Human Rights were now included. Many problems need to be resolved now. According to Heiko Maas, one of the main challenges right now is to get people to the airport safely, in order to make sure they can be flown out.