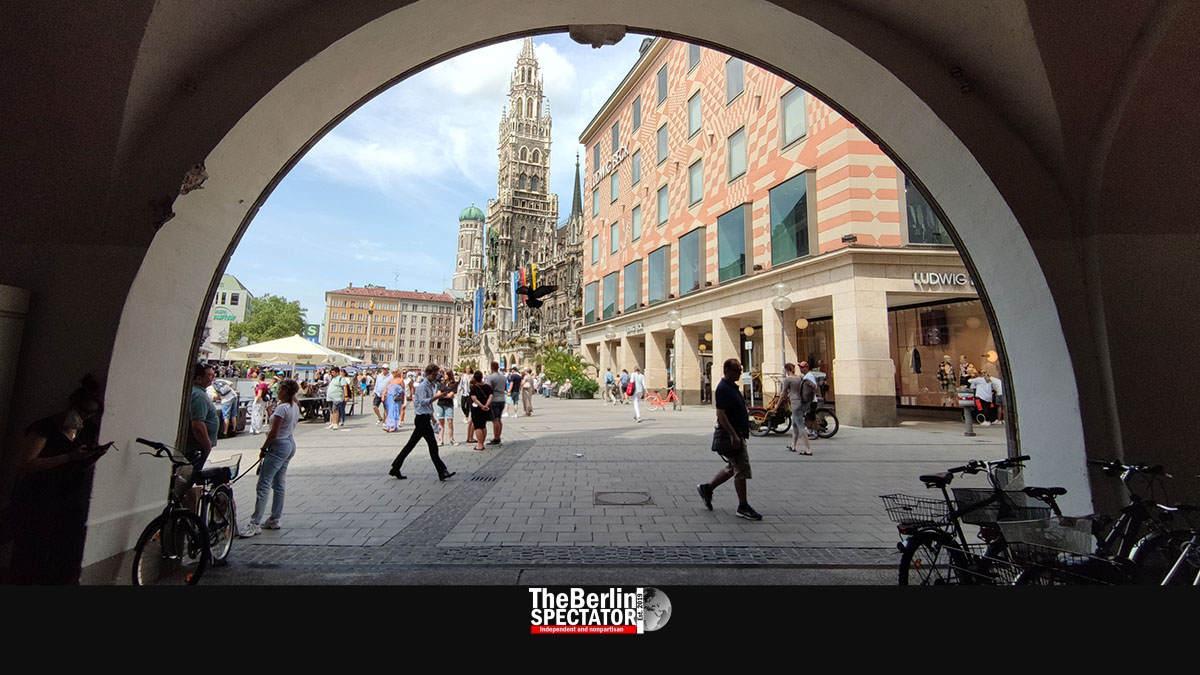 Everyone likes Munich, Germany’s third-largest city. This is not surprising, since the Bavarian capital offers a whole lot, including an atmosphere you will not find anywhere else. Especially in summer, Munich is the place to be. Bring your bikini.

Berlin/Munich, August 22nd, 2021 (The Berlin Spectator) — Returning to Munich after several decades is good, especially in August. No other large city in Germany offers this many novel opportunities when it comes to getting wet, cooling down or getting drunk. Tourists will need several days to explore the beautiful city center and the English Garden with its attractions. Once they are done, they will get to the conclusion that Munich is one of a kind.

Those pedestrian zones do not seem to end. Munich is the place where sparkling water at an elegant café with arrogant waiters at the Isar river costs 6 Euro (7 U.S. Dollars or 5 Pounds Sterling). It is also the one spot in the universe that offers something for everyone. This is the city which will fatigue any ambitious tourist. Delicious food and exaggerated amounts of beer are being consumed in Munich. This place provides truly stunning views and a lot of beauty. And, yes, it is very international too. There is nothing Munich does not offer.

Munich is growing. With 1.5 million inhabitants, it is now as large as Hamburg used to the in the 1980s. Its population density is a lot higher than the ones in Germany’s largest and second-largest cities, Berlin and Hamburg. Apart from all the culture and history Munich offers, it is also an important business center. The Allianz group has its headquarters there. So does Siemens. BMW stands for ‘Bayerische Motoren Werke’ (‘Bavarian Engine Plants’). Where are they based? In the Bavarian capital. Their unmistakable headquarters and the BMW Museum are located in the city’s north, close to the Olympic park with its fascinating architecture.

Whenever some magazine in the world lists the cities with the highest quality of life in the world, Munich will be part of the top ten. Besides, among Germany’s largest cities, it is the safest one with the lowest crime rate. So, isn’t there anything to complain about in Munich? Oh yes, there is. The prices. Just looking at a restaurant menu in the city center causes headaches, for this reason. Purchasing real estate or renting a decent apartment is a problem for average citizens unless they just won the lottery.

But, other than that, Munich is such a friendly, positive place. This was not always the case though. When the Nazis came to power, Munich was what they called the capital of their “movement”. Nazi Germany built its first concentration camp in Dachau, located 19 kilometers (12 miles) from Munich’s city center. Yes, the city was a Nazi stronghold early on. At Ludwig Maximilians University, the Scholl siblings were arrested for distributing leaflets critical of Adolf Hitler’s fascist regime by the Gestapo. They were murdered by execution four days later, on February 22nd, 1943, in Munich.

Much later, in the early 1970s, when the Federal Republic of Germany was just over 20 years old, antisemitic terror returned to Munich. This time, it was not state-sponsored. In 1970, seven Holocaust survivors died at their Jewish retirement home when it was set on fire. The perpetrators were never found. In early September of 1972, Palestinian terrorists murdered eleven Israeli athletes at the Olympic Games, in an attack known as the Munich Massacre.

Let’s return to today’s Munich, Bavaria’s awesome capital, the tourist magnet that will mesmerize everyone. Its geographical location makes it Germany’s portal to Austria, the Alps and Eastern Europe. At the same time it is the entry to Germany from the southern and eastern perspective. Munich is an excellent starting point for trips to Bavaria’s stunning mountains and lakes. Because it has so many hotels, accommodations for tourists are actually affordable down there.

On a hot day in mid-August of 2021, Munich was crammed. At Marienplatz, right next to the city’s neo-Gothic City Hall, absolutely all languages were heard, including English, Spanish, Bulgarian, Russian and Arabic. Sure, because of Corona most Asian and North American tourists have stayed away since 2020, but the many German tourists who started exploring their own country during the pandemic definitely made up for the shrinking number of visitors from overseas.

Since there were hardly any tickets left, for anything, going where hardly anyone else goes was the right thing to do. City Hall’s tower is a great alternative to the Olympic Tower or the ‘Alter Peter’, because nobody seems to know it exists. Besides, no tourist will have to climb stairs there, at 100 degrees Fahrenheit. The elevator takes people straight to the observation platform.

Munich’s Frauenkirche used to provide an opportunity to see Munich from above too, but its south tower is being renovated since 2012. It is unclear whether it will ever reopen, but the beautiful church, one of Munich’s main landmarks, is worth a visit anyway. The only reason why Frauenkirche is widely visible is the fact that Munich does not allow the construction of high-rises. Between modern office towers, the church would definitely disappear from everyone’s sight. Munich is not Manhattan, because it is not supposed to be.

Consecrated in 1494, the Frauenkirche is one of Germany’s largest hall churches. Catholic Mass is still being held there. But there are other nice Christian temples in Munich too, including St. Peter’s Church, or tiny ones such as St. Johann Nepomuk Church with its fascinating interior. This one was squeezed into a little space between buildings. Priests and believers are comfortable in Munich. So is Bavaria’s First Minister. The State Chancellery is a truly beautiful building and therefore yet another sightseeing spot.

Have we mentioned Viktoralienmarkt? Well, let’s do so right now. Since 1807, this food market has been open on a daily basis, with the exception of Sundays and holidays, the war and the first Corona lockdowns. Located in Munich’s oldtown, this tourist attraction is not exactly cheap. But for visitors or locals who insist on having violet cauliflower or anything delicious, Viktoralienmarkt is the place to be.

No, we have not forgotten the Hofbräuhaus either. William V, the Duke of Bavaria, insisted on the foundation of a local brewery in 1589. This is when the beer hall was built. It is the most famous place of its kind in the world, and a good spot to pour beer down one’s throat. But, in history, the Hofbräuhaus is also connected to Hitler. Long before he was in power, he painted the building. On February 25th, 1920, he held the founding speech for his Nazi party NSDAP right there.

Munich is full of museums, cultural venues and all kinds of sightseeing spots. The largest of the latter is Englischer Garten. It is one of the largest parks in the world and features thousands of trees, countless lawns, two creeks and a lake. On Saturdays, what the Bavarians call ‘Frühschoppen’ takes place around the Chinese tower in the southern part of the park. Here, the locals actually start the day with a ‘Mass Bier’, a giant glass with one liter (a quarter gallon) of beer. With it, they consume pretzels and pork.

‘Schwabinger Bach’, one of the park’s creeks, is the center of it all. On hot summer days, thousands of mostly young residents and visitors usually lie on the grass in bikinis or bathing shorts. They drink, talk, read and laugh. Once in a while, they hop into the rather cold creek to cool down. On August 14th, 2021, the water flow was a lot stronger because of the excessive rainfall which hit Bavaria a week or two earlier. Countless picnics, including one for Mexican expats, took place that day, right at the creek. ¡Gracias, paisanos! This place looks like a holiday resort, because it actually is one. There even is an area for skinny dipping and nude sunbathing.

Munich is not Hawaii, right? At least this is what the author of these lines thought before he returned to Munich for the first time in 34 years. But it actually is. Lots of people in the city center carry surfboards. Following them will lead visitors to the ‘Eisbach’ creek at the ‘Englischer Garten’. Right next to a bridge at ‘Prinzregentenstrasse’, a little waterfall causes a “standing wave” surfers use, but only one of them can hit it at a time. That is why surfers usually stand in line on both sides of the creek, until the next one falls into the cold water and is carried away. This is why Munich is like Hawaii. Sort of.