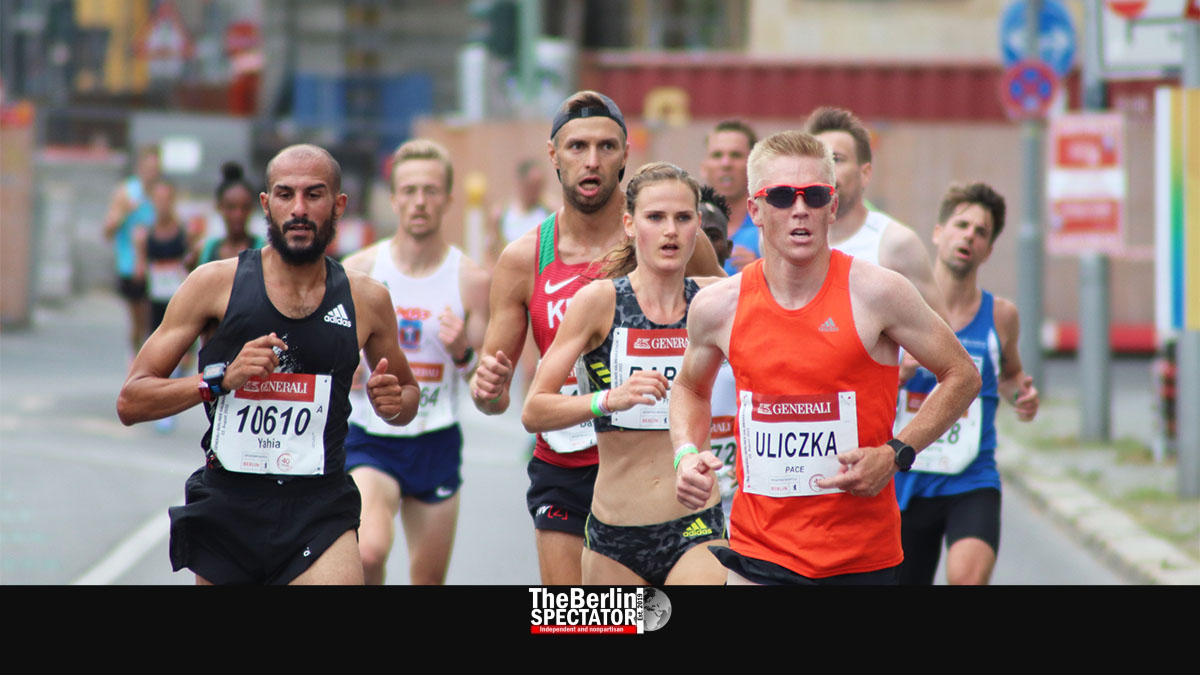 In Berlin, Joyciline Jepkosgei and Felix Kipkoech won the Berlin Half Marathon on Sunday. First, the inline skaters and wheelchair users started the race. Then it was the runners’ turn.

Berlin, August 22nd, 2021 (The Berlin Spectator) — Only 58 minutes and 57 seconds after Berlin’s Governing Mayor Michael Müller fired the starting shot, the 23-year-old Kenyan national Felix Kipkoech became the first runner to cross the finish line located just west of Brandenburg Gate. The moment he was done, he checked his watch and looked like he was ready to do it again. The Berlin Half Marathon obviously did not cost him too much effort.

More Kenyans are among today’s winners. Josphat Tanui, who became second, and Philemon Kiplimo, the third man to finish the race, did it in just under one hour. But while the men did not kill the record, the women did. First, the winner Joyciline Jepkosgei underbid Sifan Hassan’s record of 1 hour, five minutes and 45 minutes. The second lady to win today’s race, Nancy Meto, did so as well, by 24 seconds. Valary Aiyabei, yet another Kenyan runner, became the third-fastest woman today.

The organizers and participants were not lucky at all last year, when the Berlin Half Marathon had to be scrapped thanks to the Coronavirus. A lot of luck was registered today, also because the 40th edition of this event ended just before it started raining at 1:14 p.m. CEDT. The runners were satisfied with the way the Half Marathon was organized, according to comments they left on social media, and they were glad they could run together at all.

On Sunday morning, the whole thing commenced at Strasse des 17. Juni, close to Berlin’s Victory Column. The hundreds of participants just kept on running straight ahead, via the Technical University to Charlottenburg Palace. There, they took a sharp left in order to run towards Sophie Charlotte Platz and the fairgrounds. Once they finally reached Charlottenburg, they were only half way through the race.

Spectators at the Gate

Via the Nollendorf Kiez neighborhood, Potsdamer Platz and Checkpoint Charlie, they headed for Brandenburg Gate, where they were expected by hundreds of spectators, including The Berlin Spectator. It is safe to say that the Berlin Half Marathon was a full success. According to the organizers, more than 21,000 people from 140 nations took part. Over and out.