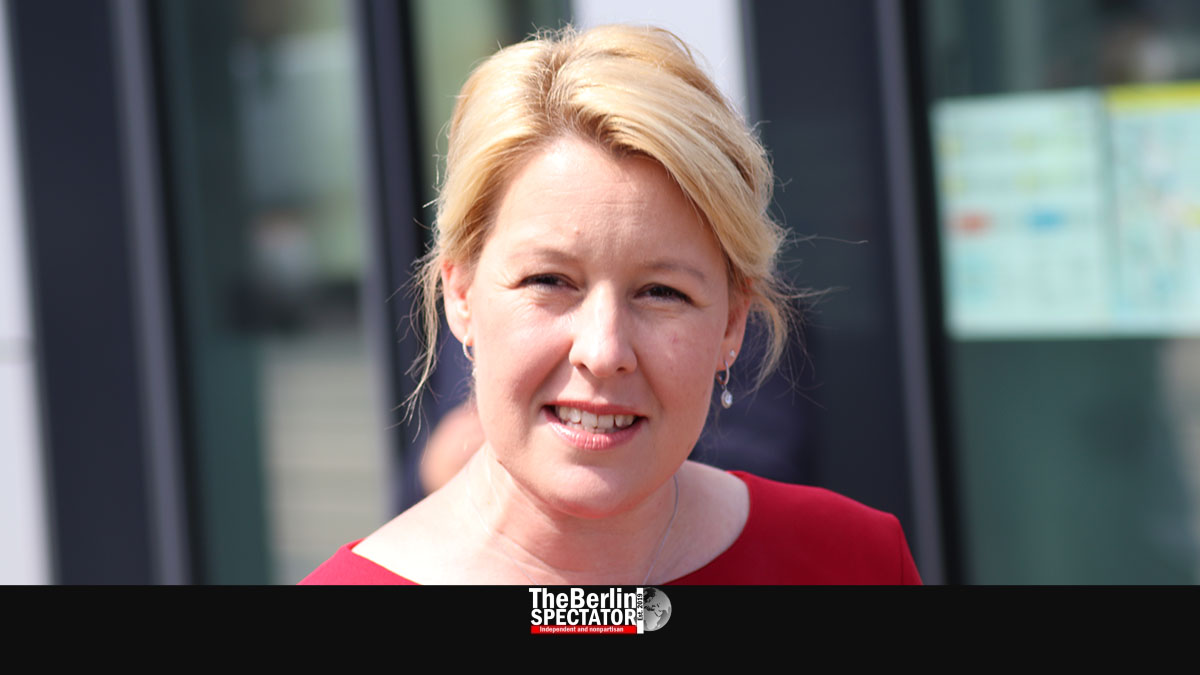 Exactly one month ahead of Super Sunday, the center-left SPD in the city state of Berlin can expect more support than anticipated, according to the latest poll. Franziska Giffey might become Governing Mayor after all.

Berlin, August 26th, 2021 (The Berlin Spectator) — In the past years, Germany’s Social-Democratic Party was buried in articles and comments all the time, for a good reason: The party literally drowned in virtually all polls, with the exception of those in its strongholds Hamburg and Rhineland-Palatinate, where the SPD members Peter Tschentscher and Malu Dreyer are heading government coalitions. Now, the tide is turning.

On the national level, the SPD, which is the oldest party in Germany, just caught up with the conservative CDU/CSU, for the first time in many years. In the city state of Berlin, the situation is now comparable. According to a poll by the Infratest institute conducted for the RBB radio and TV network and the ‘Berliner Morgenpost’ daily, the Social Democrats just gained 6 percent. This makes them the strongest party. Again, it is the first time in years.

The results of the poll must be a big relief to Franziska Giffey, the former Family Minister who tripped over a plagiarism scandal which keeps on haunting her. As it turns out, the issue does not seem to hurt her party in Berlin. In fact, the opposite is the case. The conservative CDU stands at 19 percent and the Green party, which has led the polls for years, just slumped by 5 to 17 percent.

Of course, these results will have big implications if they turn out to be accurate in a month from now, on September 26th, 2021. If this is the case, Berlin’s three-way, center-left “red-red-green” government coalition would be able to continue ruling the city state in this constellation, under the SPD’s leadership. Up to now, the Greens had every reason to believe they could replace the Social Democrats as the strongest coalition partner and conquer Red City Hall. Not anymore.

The third coalition partner, the far-left ‘Die Linke’, can expect 12 percent, according to the poll. While the extremist right-wing AfD gained one point and stands at 11 percent, the center-right FDP might end up with 8 percent.

September 26th is Super Sunday. Elections for the Bundestag coincide with state elections in Mecklenburg-Hither Pomerania and Berlin. In the capital, voters will be very busy. They will have to mark ballots for the Bundestag and for the Berlin House of Representatives. In addition, there is a referendum about dispossessions of large real estate companies.