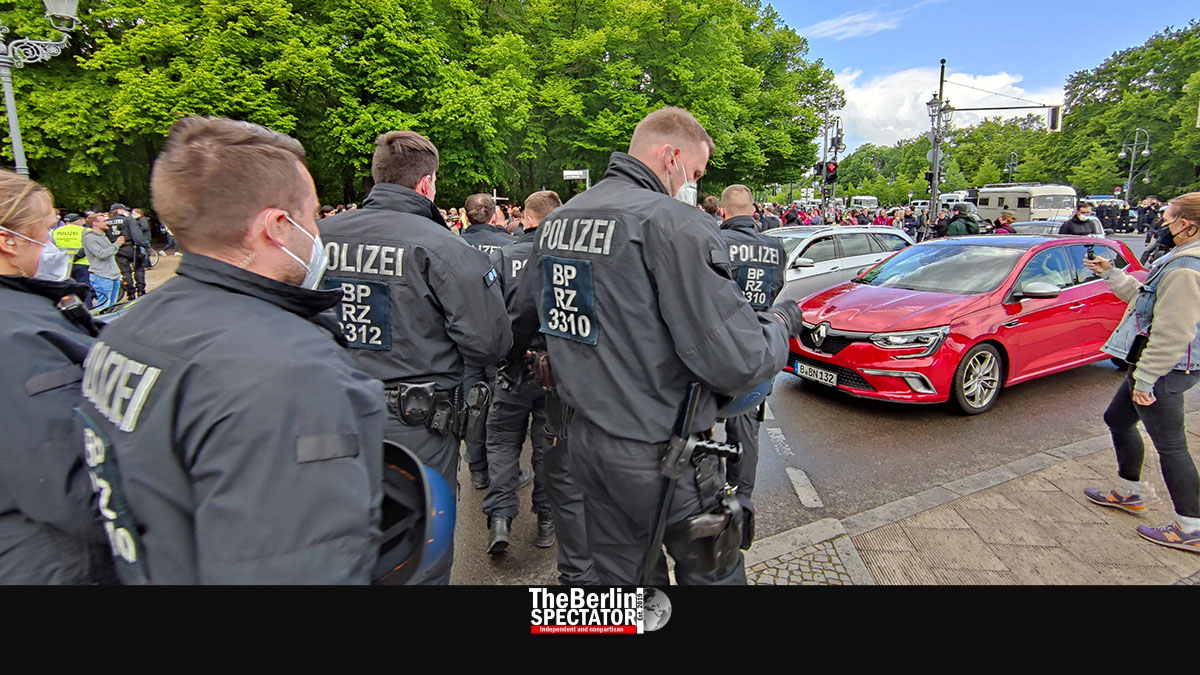 Yet again, members and supporters of the ‘Querdenken 711’ movement of Corona deniers will likely stage protests in Berlin, in spite of the fact that the authorities banned most of them. Thousands of police officers are preparing for a stressful weekend.

Berlin, August 28th, 2021 (The Berlin Spectator) — In Berlin, more than 4,000 police officers from several federal states will be on duty this weekend. Their job is to prevent illegal protests from taking place, but this kind of mission has been impossible to fulfill several times in the past. The movement ‘Querdenken 711’ from Stuttgart and other groups registered several demonstrations on the streets of the German capital on Saturday and Sunday. All of them were forbidden by the authorities.

The Berlin authorities prohibited a total of thirteen protests. As usual, the organizers reacted by filing urgent motions at courts. So far, most of those were rejected. The court in charge said the participants of those rallies would most likely not adhere to the Corona rules, since they had not done so in the past. Indeed, Corona deniers generally do not wear masks or keep their distance. For this reason, the police have ended many rallies organized by them. At some point this year, Berlin started forbidding those demonstrations.

According to the authority in charge, which is part of the Berlin Police Department, the ban was announced in order to protect the health of many. The court agreed with the reasoning in three cases, so far. More urgent motions might be filed. In the case of two protests registered for 500 people each, one today and one on Sunday, the judge threw the ban overboard because the organizer has not attracted negative attention in the past.

Conspiracy theorists who deny the existence of the Coronavirus and accuse the German government of having become a “Corona dictatorship” have caused issues since last year. Not following Corona rules is their trademark. They have radicalized each other by spreading the weirdest theories. On many occasions, they have teamed up with right-wing extremists, including members of the radical party AfD and Nazis. A year ago, to the day, participants of a large Corona denier’s protest broke through a police barricade and almost managed to storm the Reichstag building in Berlin, which accommodates the Bundestag. Another problem is the fact that Corona deniers have attacked police officers and reporters on a regular basis.

A spokesperson for the Berlin Police Department announced, the bans would be enforced. Last time, on August 1st, a large rally went ahead in spite of the fact that it was banned. Back then, thousands of conspiracy theorists took to the streets of Berlin and spread their weird claims. This time, the Police Department said it would be present and protect the government quarter, above all.

The police will have to deal with another big event too, one that was not banned, namely the “Procession of Love” (“Zug der Liebe” in German). On Saturday afternoon, some 10,000 people are expected to take part in this protest for a reopening of dance clubs. The participants intend to dance to loud Techno and House beats while they march from Berlin’s Mauerpark to Karl Marx Allee, a major street in the eastern part of the city.