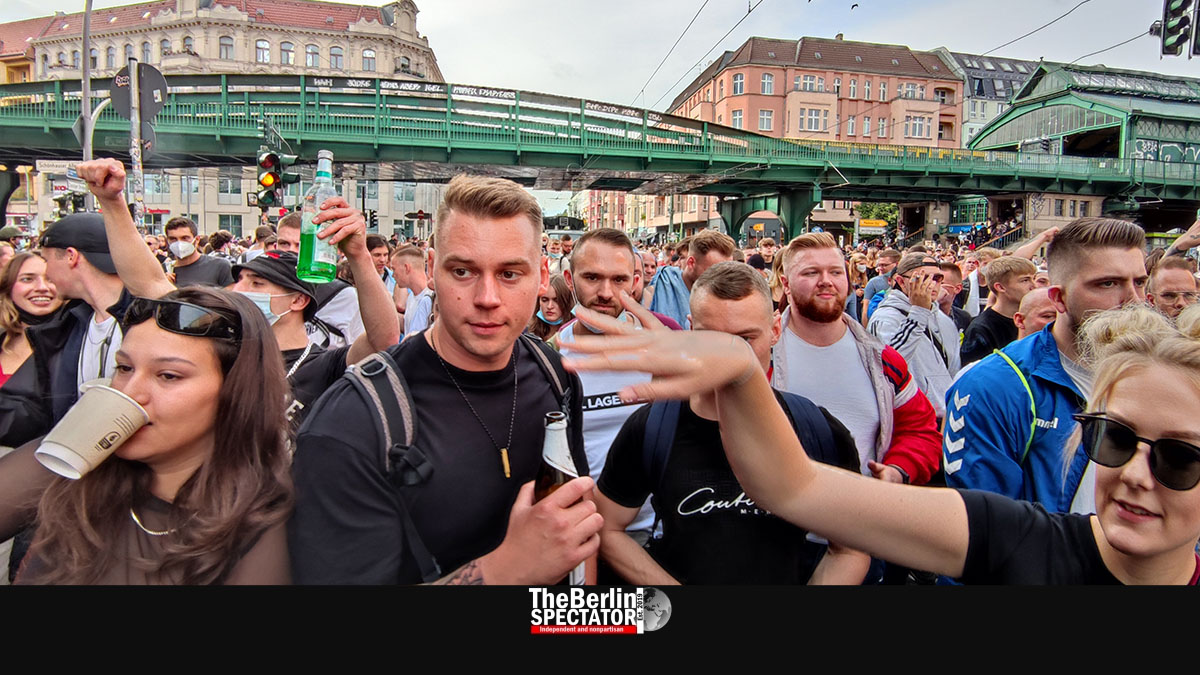 Berlin, August 28th, 2021. Update: 9:12 p.m. (The Berlin Spectator) — An association called ‘Zug der Liebe’ (‘Procession of Love’) has been organizing giant street parties in Berlin once a year since 2015, with the exception of 2020, when the event was cancelled because of the Corona pandemic. In a way, the rally, which carries the same name, ‘Zug der Liebe’ is a successor of the Love Parade which took place in West Berlin and the German capital from 1989 to 1996.

On Saturday, the procession included some 10,000 Berliners and visitors as well as several trucks with giant loudspeakers. “Oooomph, oooomph, oooopmph, oooomph”: This is what the loud music they played sounded like. While the beats were monotonous, the message they were supposed to convey was not. According to the organizers, this was about “giving people in this city a sense of a revival after the pandemic, and to show how diverse Berlin’s culture is”.

They said tolerance and humanness were important values in a liberal society. These aspects were supposed to be foregrounded today. According to the people behind the ‘Zug der Liebe’, the association’s network is growing rapidly. It supports social organizations. At the same time, it represents clubs and other venues that want to reopen for good. Berlin’s famous club scene finally wants to get back on the dancefloor.

Hundreds of police officers accompanied the rally on Saturday. They were very busy because Corona deniers from southern Germany are in Berlin yet again. They are staging protests most of which were banned by the Police Department earlier this week. Two thousand cops were on duty today. A total of 4,200 police officers will be doing their job in Berlin this weekend. Many of them came in from other federal states.

The atmosphere at the ‘Zug der Liebe’ was good. Thousands cheered and danced during the rally. Others just followed the crowds as if they were part of a conventional protest. At 1:00 p.m. CEDT, the event had commenced at Mauerpark. Seven hours later, after moving through the entire city center, it was supposed to end at Karl Marx Allee. As opposed to those illegal Corona denier’s protests, the ‘Zug der Liebe’ was peaceful and legal. But the organizers had to end it ahead of time because too many participants did not follow the Corona rules.

In 2015, the Techno rally supported refugees. A year later, it informed people about the danger posed by the extremist right-wing party AfD. Freedom of speech was being highlighted twice. A “social rave” is what the protest is supposed to be, according to its founders.