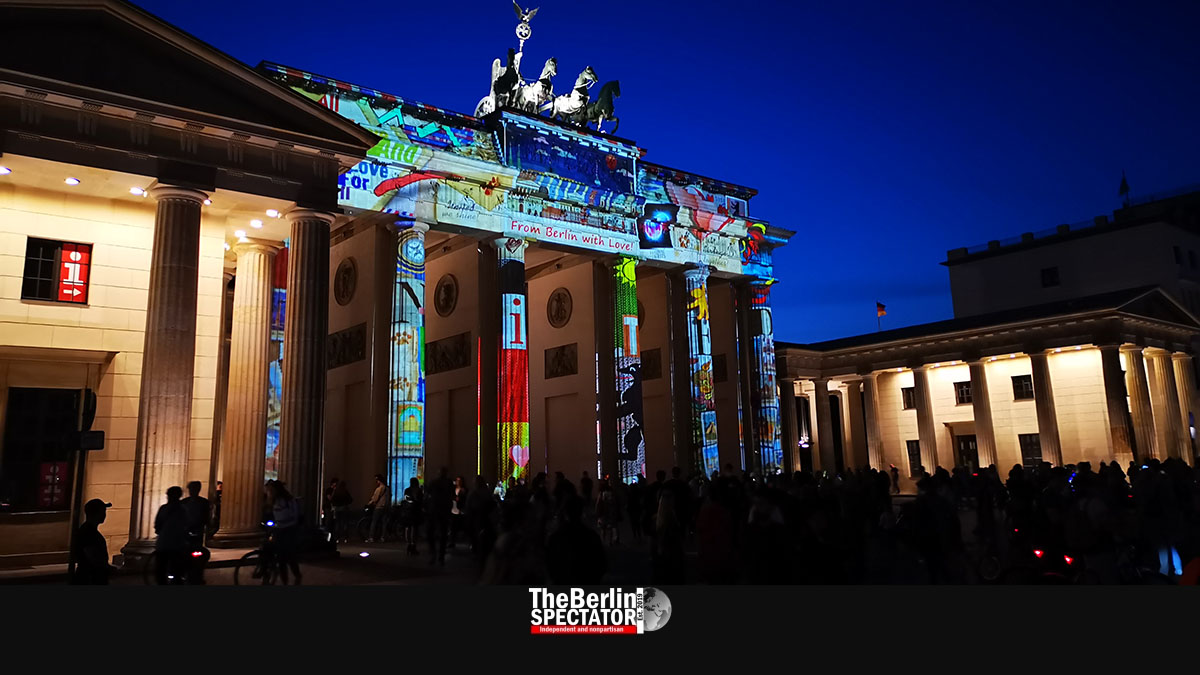 Once a year, the Festival of Lights mesmerizes both Berliners and visitors. Corona did not stop it from happening last year, and the event will go ahead again this time. It starts on Friday.

Berlin, September 2nd, 2021 (The Berlin Spectator) — In the past few days, Berliners may have noticed big black boxes right next to virtually all sightseeing spots in the city center, with stickers saying “Festival of Lights”. These boxes prove that light can be transported in boxes after all, because this is exactly what they contain. Let there be light! In all colors of the rainbow!

During the Festival of Lights, which takes places from Friday, September 3rd to Sunday, September 12th, 2021, Berlin will be illuminated. This year’s motto is “Creating Tomorrow”. According to the organizers, many themes and visions are connected to it, including the task of the preservation of this planet, but also science in general, electric mobility and digitization. Cultural diversity is yet another aspect the artists involved will be interpreting with countless lights and 3D installations.

Berlin’s Festival of Lights is “the largest open air gallery in the world”, according to the organizers. A total of 75 buildings are supposed to be illuminated. Some 100 art motives will be projected onto them. “Unique light art” is being promised for the big event. Those lights will be spread all over the city center, but also some other neighborhoods. The Festival of Lights is a “shining experience for everyone”.

First of all, it will have to get dark, since lighting up buildings and other objects in daylight does not make too much sense. The fact that the days have gotten shorter again since June 21st is an advantage. As always, Brandenburg Gate will be illuminated. So will the neighboring U.S. Embassy, Charlottenburg Palace, the TV tower, the Foreign Ministry, the new Berlin Palace a.k.a. the Humboldt Forum, Propststrasse, the Nikolaiviertel neighborhood and Red City Hall. Humboldt University will be lit up in many colors too. So will the Hotel de Rome, and the Belgian Embassy.

Of course, there is a slight problem called Corona. That is why the Festival of Lights team is asking everyone to keep their distance and to wear masks. “In case you notice the square you intend to enter is getting too crowded, please return at a later moment”, the organizers say. They stated the police might step in and tell them to switch off the lights until the crowds become smaller.

Berlin’s annual Festival of Lights has been taking place since 2005. Borrowed idea are the best ideas, right? That is why cities like Amsterdam, London and Durham have since jumped on the bandwagon.

More information about the Festival of Lights can be found on the event’s website.