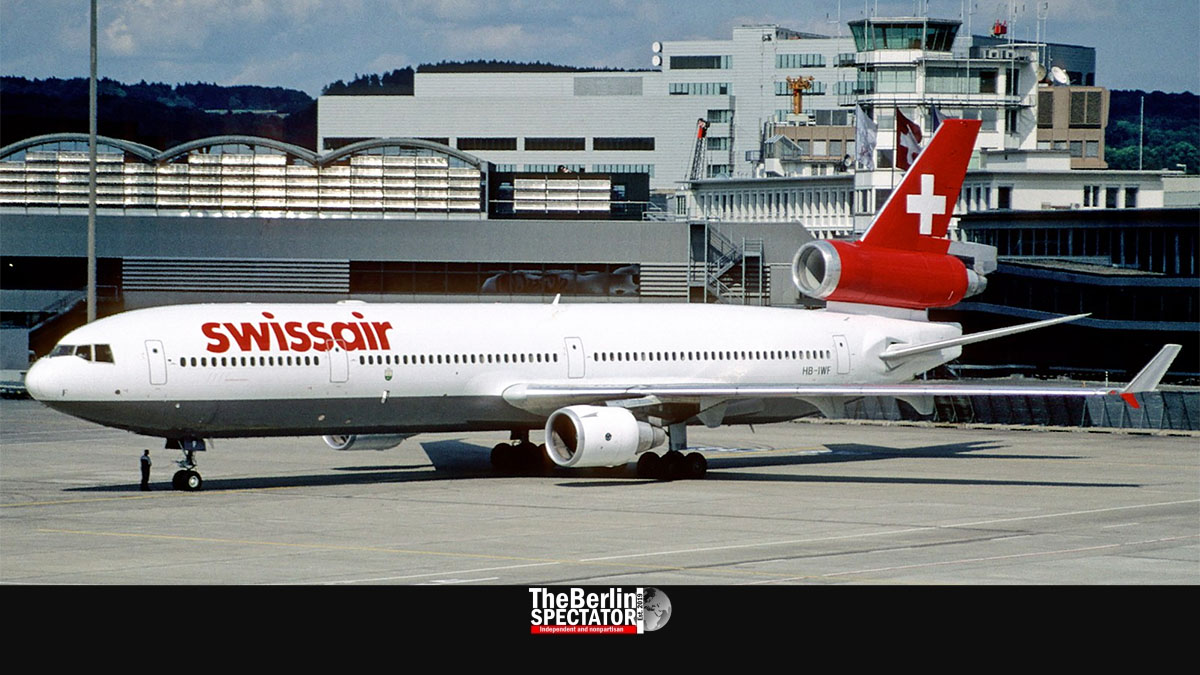 Twenty-three years ago today, Swissair’s flight 111 was lost, along with everyone on board. It was one of the last crashes on the North Atlantic Route, and one of the most shocking ones.

Berlin, September 2nd, 2019. Update: September 2nd, 2021 (The Berlin Spectator) —  On September 2nd, 1998, Swissair’s flight 111 crashed into the sea off Nova Scotia. All 229 people aboard were killed. As the aircraft, an MD-11, raced into the night, the pilots were facing a big problem. The fact that they underestimated it at first was not their fault. They did exactly what the airline had taught them to do. On the other hand, they might have been able to save the plane, had they just thrown the regulations overboard.

Smoke in the cockpit is something many pilots are confronted with, even these days. All of them know the sad story of Swissair 111. For this reason, they do not want to take unnecessary risks. So they divert and land quickly.

Flight crews learn how to deal with fire aboard aircraft during their training. This applies to flight attendants and pilots. What they do not learn is how to extinguish a fire between the outer hull of a plane and its wall covering, one which burns through cable harnesses at 4,000 degrees Centigrade (7,000+ degrees Fahrenheit).

Flight 111 left New York’s John F. Kennedy Airport on time. Its destination was Geneva. Because both New York City and Geneva are basically the capitals of the United Nations, there are headquarters in each of those cities, this night flight was known as the “diplomat shuttle”. Some U.N. diplomats used it once a month, others even once a week.

It was 8:18 p.m. when the MD-11 designated as Swissair fight no. 111 raced down one of the runways. At ‘V2’, Captain Urs Zimmermann and co-pilot Stephan Löw pulled the plane’s nose up. Without any issues, the enormous jet rocketed into the night sky over the U.S. East Coast.

MD-11s are just as ugly as their predecessor, the DC-10. They have the same weird expression in their ‘faces’ when looked at from the front. Pilots and airlines loved this model though. It was considered a lot safer than the DC-10. Its three engines sucked less kerosene out of its tanks than the Boeing 747 did with its four engines. On top of it all, it was easy to fly.

Weird Smells from the A/C System

The plane was still climbing when the passengers must have tried to get comfortable. Most likely, some tried to sleep, in order to be fit for a day at work in Geneva. Forty-four French citizens were on flight no. 111, three of them with dual citizenship. Forty-eight Swiss nationals, four of them with dual citizenship, were aboard too. So were as many as 110 Americans and 27 passengers and crew from 19 other nations.

At 8:58 p.m., the flight reached its cruising altitude. Only some 12 minutes later, the pilots smelled traces of smoke in the cockpit. At this stage, they believed the air conditioning was the source. Weird smells, transported by the A/C, are a relatively normal occurrence up there.

Another two minutes later, smoke was spreading in the cockpit. By now, Zimmermann and Löw knew they were in a more serious situation, but they still thought it was more harmless than it actually was. Had they known just how serious things were, they would definitely have reacted differently.

At 9:13 p.m. U.S. Eastern Time (EDT), the pilots were busy choosing an airport to make an emergency landing at. A minute later, Zimmermann sent a ‘Pan Pan Pan’ call to the Canadian flight controllers in charge. This kind of call stands for a serious situation, but falls short of the kind of the kind of urgency a ‘Mayday’ call would have had.

Now, the pilots were ready to turn around and go to Boston, but the controllers convinced them to land at Halifax Airport, which was a lot closer. Actually, it was too close. Since they needed more room for their descent, they turned east, over the sea. While they were losing altitude, they wanted to get rid of kerosene, since the plane was far too heavy for a landing, according to the handbooks.

It was 9:24 p.m. when the crew knew exactly how alarming their situation was. At this moment, the pilots might have used fire extinguishers against the flames which were coming out of the rear cockpit wall. They announced they had to “land immediate” (instead of ‘immediately’) and repeated the fact that they were in an emergency, a minute later. This was the last time they were heard.

At 9:30 p.m., residents in St. Margaret’s Bay saw and heard “a huge plane flying low”. Seconds later, the MD-11 crashed into the North Atlantic Ocean at a speed of more than 500 kilometers per hour (310 mph). At that millisecond, everyone on board was dead. The plane exploded into millions of parts. So did the victim’s bodies.

Thirty minutes after the crash, it was 4:00 a.m. in Switzerland, on September 3rd, 1998, twenty-three years ago today. One by one, the media learned about the horrible news of this night, and reported it to their readers, listeners and viewers. The author of these lines was a freelance radio correspondent in the United States at the time. He reported about the crash for Radio 24, an independent station in Zurich, and for German networks.

Too Heavy for Landing?

Everything the pilots did was right and wrong at the same time. It was right in the sense that they did exactly what Swissair expected from them. They kept calm as long as possible, while trying to resolve their issue. When they knew they had to go for an emergency landing, they followed the checklists for cases of this kind.

But doing what they were supposed to do may have cost them their lives, along with 227 others. Back then, experts said that, had the pilots just landed in Halifax without any delays, they might have saved the flight, even though it was far too heavy to land, officially, since it had not consumed enough of the kerosene it was carrying.

Five years later, in 2003, the investigation report was released. It said that there had been a short circuit on a cable the isolation of which had been broken. That cable had provided energy for the modern in-flight entertainment system the plane was equipped with. It looks like that short circuit caused a fire, since insulating panels behind the walls of the cockpit were not fireproof. But they were supposed to be.

A few hours after everyone on board Swissair flight no. 111 had died in the waters off Nova Scotia, some families and friends of the victims went to John F. Kennedy Airport, where they were informed about the crash. The shocked and crying people were a very sad sight, the author of this article remembers, as the next of kin were cared for by psychologists and other medical professionals.

Another few hours later, that sad scene repeated itself at Geneva Airport, after the terrible news had spread there as well.

The Swissair 111 crash was the end of Swissair. Because of the technical issues which led to the deadly accident, the American FAA changed some regulations, in order to make flights safer.

This accident was one of the terrible losses which happened above the North Atlantic during that era. Those also included TWA flight 800, a Boeing 747-100 which was ripped apart in a center fuel tank explosion south of Long Island two years earlier.

The crash of Egypt Air flight number 990 happened fourteen months after Swissair 111. It was a co-pilot suicide. And ten years before, in 1988, Pan Am flight no. 103 was destroyed by a bomb over the Scottish town of Lockerbie. Libya’s leader General Gaddafi accepted responsibility for this attack in 2003.

On a positive note, flying across the North Atlantic has become a lot safer in the past two decades. Since this terrible period, during which hundreds of passengers and crew members died, including the 229 people who were on Swissair flight 111, nothing bad has happened on the North Atlantic Route.

Today, exactly twenty-three years after the crash of Swissair flight 111, the victims are being remembered by their families and friends. And they will be forever.

The main photo by Aero Ikarus (view license) at the top of page shows the MD-11 which crashed on September 2nd, 1998. It was photographed on July 14th, 1998, exactly 50 days before the accident.