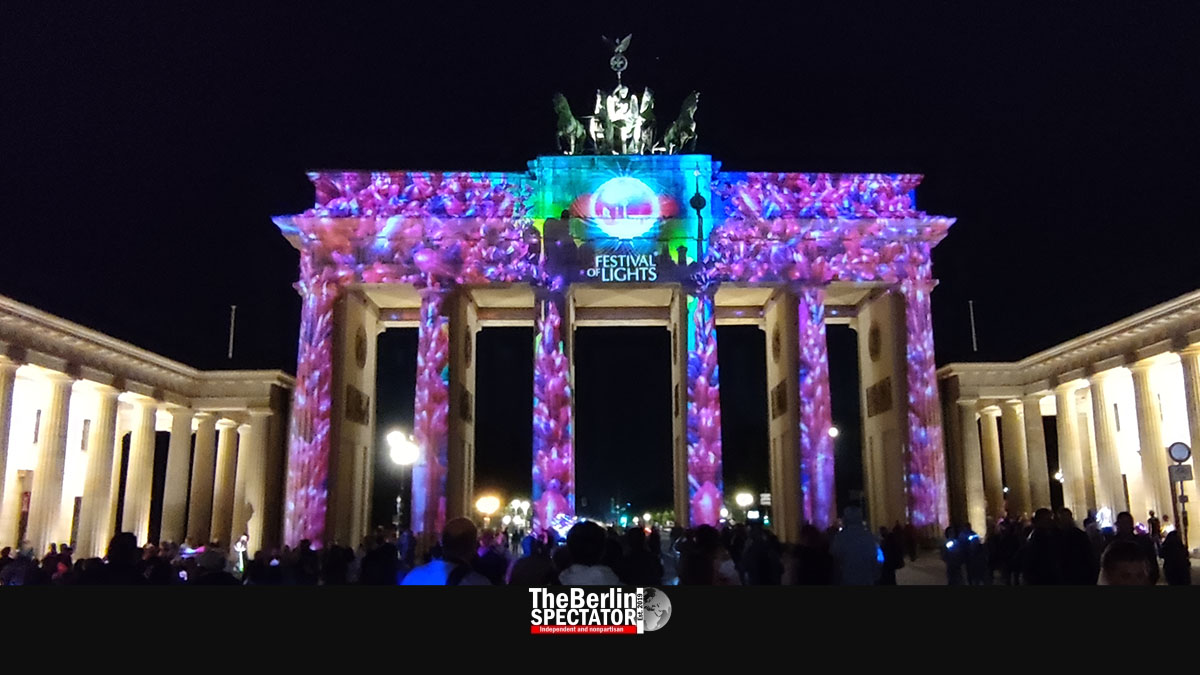 Almost the entire city of Berlin seemed to be on its feet on Friday night, when many famous buildings were illuminated in many colors. The Festival of Lights just commenced.

Berlin, September 4th, 2021 (The Berlin Spectator) — The fact that there is a Hotel de Rome in Berlin might be surprising. (Is there a Hotel de Berlin in Rome? Probably not.) When the beautiful building it is located in turns into a jungle and an aquarium in quick succession, the surprise is even bigger. This is exactly what happened during the first night of the Festival of Lights, when the hotel’s façade was turned into light art of the most fascinating kind.

While Hotel de Rome featured the blue sea and its inhabitants, the neighboring opera house became a sea of flowers, and the Faculty of Law on the other side of Bebelplatz square got its share of light art too. And how about Berlin Cathedral, across the street? It too became an object of art, by turning from a landscape in fall colors into colorful pictures of different kinds. All the lights made it change like a chameleon.

Thousands of Berliners were on their feet on Unter den Linden, the major street that connects Museum Island to Brandenburg Gate. And yes, the Gate was illuminated too. Last night, it became an even more popular sightseeing spot than it usually is. This will be the case every night until September 12th, which is the last day of Berlin’s Festival of Lights, an event that has become popular not only in Berlin, but around the world, because quite a few cities adopted the idea.

Red City Hall did not become an object of light art, at least not on Friday, but Berlin’s giant TV tower did. It was hard to photograph when it turned into an abstract art object. Of course it must have been quite a challenge to make the TV tower shine the way it will during the entire festival. Hundreds of Berliners and tourists stood around the construction. They were obviously mesmerized.

While most people went to the eastern city center by public transport, on foot or by bicycle, too many genius residents came by car. It was to be expected that they would get stuck at Unter den Linden and at other spots in the area. Nor did they find too many parking spots.

The Festival of Lights was created in 2005 and has been taking place on an annual basis ever since. In 2020, the first Corona year, it was one of the few cultural events that were not cancelled, obviously because it takes place outside. This year, the organizers asked visitors to keep their distance. They said the police might close locations temporarily if they become overcrowded.

Located right next to Brandenburg Gate, the U.S. Embassy was involved too. This time, they projected the faces of 70 Americans on its southern wall, along with an excellent quote by the man who runs all U.S. embassies across the globe, namely Secretary of State Anthony Blinken: “Diversity makes us stronger, smarter, more creative …”.