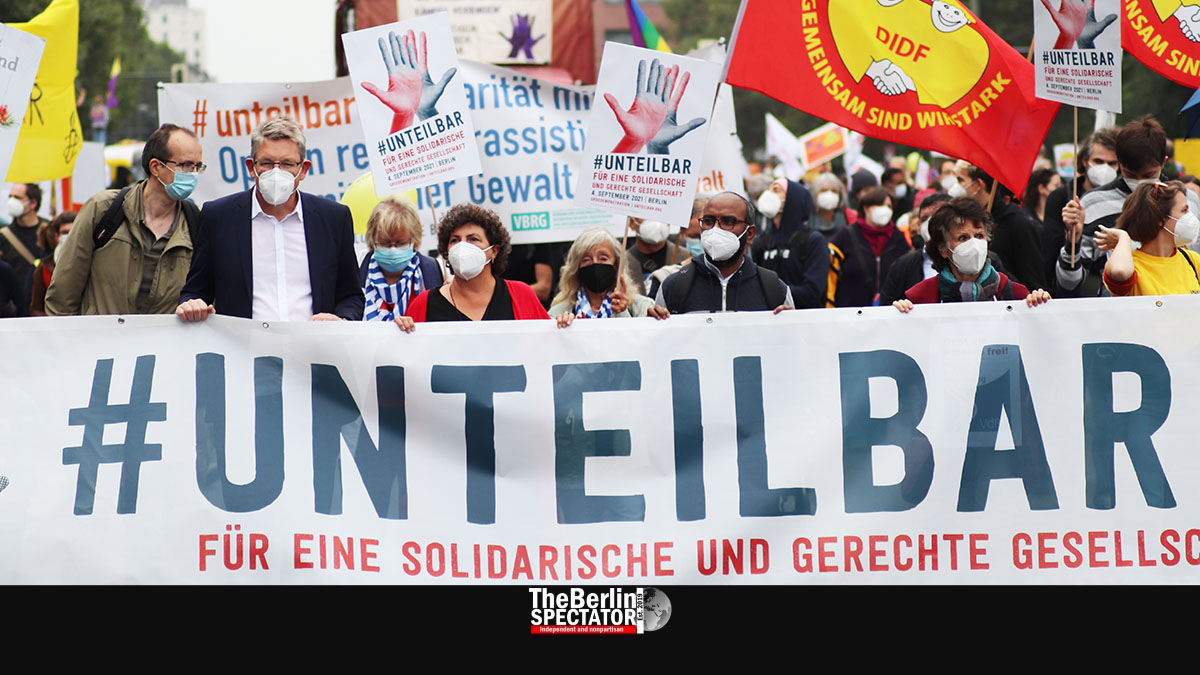 Tens of thousands of people took part in a huge demonstration in Berlin on Saturday. The “Unteilbar” (“Inseparable”) protest was organized by several parties and hundreds of other organizations.

Berlin, September 4th, 2021 (The Berlin Spectator) — “Unteilbar” (“Inseparable”) is the title of a movement and a giant protest that was staged in Berlin this afternoon. The organizers and the police expected some 30,000 participants. Racism was one of the issues people protested against. They also rallied for help for Afghanistan, against the extremist right-wing party AfD, for radical climate policies and social justice, 22 days ahead of the elections for the Berlin Bundestag.

Three major parties were among the organizers, namely the center-left SPD, the left-wing Greens and the far-left ‘Die Linke’. At 1:00 p.m., when the protest was supposed to commence, not that many protesters were seen yet. But the SPD’s co-chairman Norbert Walter-Borjans and several of the party’s candidates showed up early. The mood among the Social Democrats was good. The same applied a few steps down the road, where the Greens and ‘Die Linke’ gathered.

Three hundred mostly left-wing groups and NGOs brought people to the protest as well. The participating organizations were spread out on ‘Strasse des 17. Juni’, a major street west of Brandenburg Gaste, on Ebertstrasse between Brandenburg Gate and Potsdamer Platz square, as well as on Leipziger Strasse. By providing a lot of room, the organizers made sure people could adhere to the Corona rules, by keeping their distance. Many participants wore masks even though they were not mandatory. Shortly after 2:00 p.m., the Berlin Police Department reported most people did indeed follow the rules.

For the Berlin Police Department, a spokeslady told The Berlin Spectator 1,000 officers were on duty on the streets of Berlin today. She said 400 more were available. In case of emergency, they could be called at a moment’s notice. The fact of the matter is that the police know what kind of clientele they were dealing with today. Had they expected trouble, they would have kept more officers in the city this weekend. In many cases, they even need help from other federal states, but not today.

In the early afternoon, the protesters started moving towards Alexanderplatz square, where countless activists and NGO representatives were going to hold speeches towards the end of today’s event. The annual “Unteilbar” protests commenced in 2018 in Berlin. Last year, thousands of participants formed a giant human chain.

Police did a good job protecting today’s big protest. Parts of the eastern city center was closed to motorized traffic. It felt good to cycle on Grunerstrasse, which was absolutely empty just before the protesters got there. Because of the protest, traffic in some areas around the city center was a mess.

In Berlin, as many as 5,000 protests per year are being staged. “Unteilbar” was one of the bigger ones.