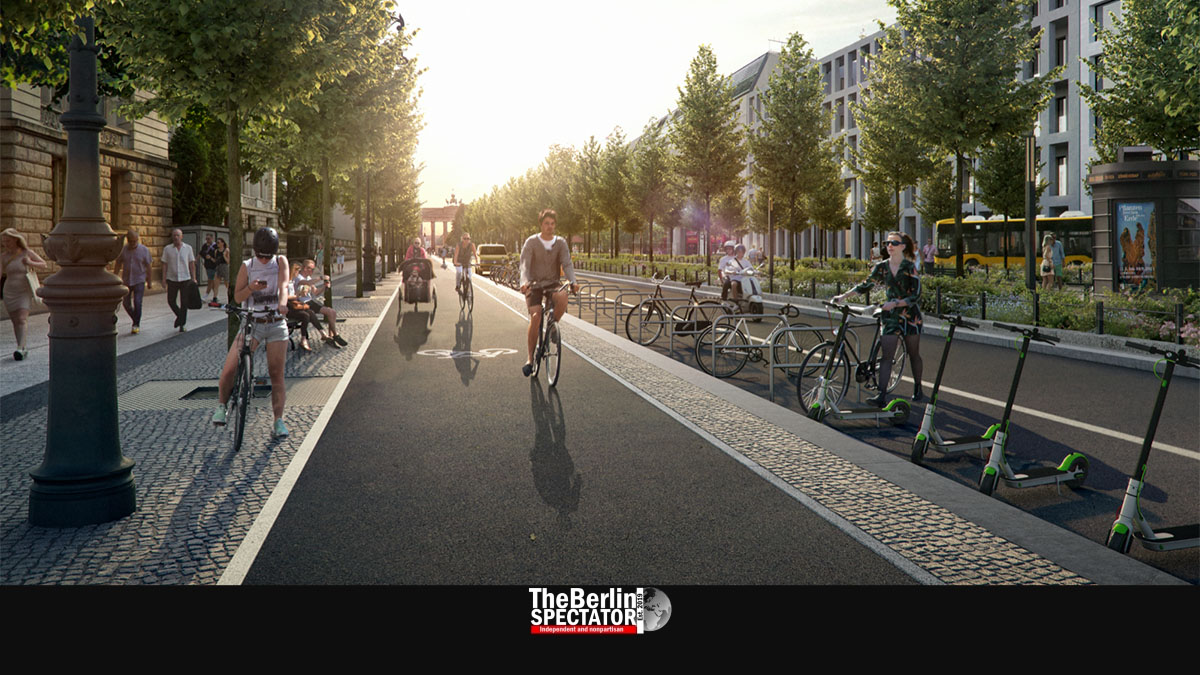 Which is the most important boulevard in Berlin? Let’s go with ‘Unter den Linden’. The Senate now wants to posh it up. It will take years until the transformation is completed.

Berlin, September 7th, 2021 (The Berlin Spectator) — Berlin’s ‘Unter den Linden’ is more than just a boulevard. For instance, it is part of Germany’s federal highways 2 and 5, even though it does not look that way. It will become part of Berlin’s bicycle highways later this decade. ‘Unter den Linden’ already is one of Berlin’s sightseeing spots, also because it is located in the vicinity of several other tourist magnets, including the State Opera, Berlin Cathedral and, the most popular one of them all, Brandenburg Gate.

In 1573, John George of Brandenburg wanted an appropriate horseback trail from Berlin Palace to Tiergarten park. One century later, the trail was turned into some kind of an avenue, when lime trees were planted on both sides of it. “Under the Lime Trees” is the direct translation for ‘Unter den Linden’. In the 18th century, it became a real boulevard with countless hotels and restaurants.

In the year 1900, ‘Unter den Linden’ pretty much looked like it does today, at first glance. Except there were no buses, less people, hardly any cars and more horses. The whole thing looked a lot tidier too. This is the state the Berlin Senate wants to get the boulevard into again. In the past years, it was a mess, and partially still is. The construction of the elegant ‘Unter den Linden’ ‘U-Bahn’ train station took a long time. While it was being built, noise, dust and construction fences annoyed both Berliners and tourists.

On the boulevard’s eastern end, construction is still going on. Berlin should get used to it because it will last for several years more. Improvement is necessary since there are several issues: There is too much motorized traffic. According to its new plans, the Berlin Senate wants to ban part of it. Buses, deliverers and residents are supposed to be able to use ‘Unter den Linden’, apart from cyclists and pedestrians.

The next problem is the street’s surface. Passengers and cyclists are being shaken like daiquiris because of hundreds of bumps on the bus lanes. All issues are supposed to be fixed, and a whole new concept will be implemented. At this stage, Berliners have the opportunity to comment on several options the Senate is considering.

These are the options for ‘Unter den Linden’:

1. The median and the sidewalks could broadened. In this case, cyclists would have one lane per direction. The other lane would be reserved for residents, delivery vans and buses.

2. This model includes protected bicycle lanes on the level of the sidewalks, which would be widened in this case as well.

3. Two additional grass verges would protect pedestrians from the traffic. In addition, there would be a narrow lane for bicycle stands and parking spots for e-strollers and residents’ vehicles. This is a more complicated approach (see picture at top of page).

There are pros and cons about each model. For instance, it would be hard to separate the cyclists from pedestrians at bus stops if the bike lanes would indeed be built on the level of the sidewalks. With additional grass verges, there would not be enough room for a broadened median or extended sidewalks. Once there is decision, it will take years to implement it. But, whatever happens, cyclists will get their own lanes soon. This fall, their construction is supposed to commence. It should be done by the summer of 2022.