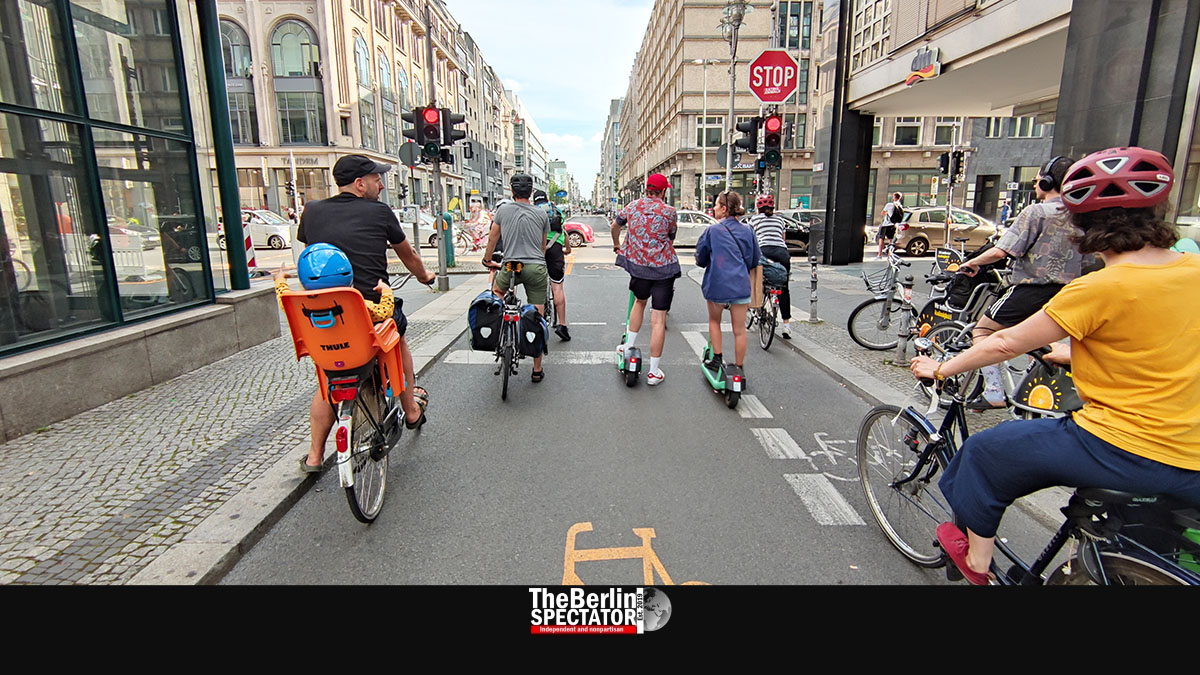 It is a giant leap for mankind: Berlin’s network of bike lanes is supposed to grow substantially. Priority bike lanes, a supplemental bike lane network and bicycle highways will be included.

Berlin, September 8th, 2021 (The Berlin Spectator) — In Berlin, the Senate just approved the city state’s new bicycle traffic plan. Once the Council of Mayors agrees, it goes back to the Senate, which will then translate it into law. The rather bold plan is supposed to become part of Berlin’s Mobility Law. What all of this means is that Berlin’s network of bike lanes is supposed to be extended substantially.

Berlin’s courageous plan includes 3,021 kilometers (1,877 miles) of bike lanes. According to the Senate, it exceeds previous intentions by far. Priority bike lanes of a total length of 865 kilometers (537 miles) are included. They will cover the German capital’s most important bicycle routes. These bike lanes are supposed to be 2,50 meters (8.2 feet) wide. With this kind of width, they will definitely feel comfortable and safe.

A supplement network of even more bike lanes is part of the plan as well. With 1,506 kilometers (936 miles), it will be almost twice as long as the priority network. These lanes are supposed to be at least 2 meters (6.5 feet) wide, meaning cyclists will still be able to overtake each other without getting off the bike lane.

There is even more: On main streets that are not included in the priority network, 550 kilometers (342 miles) of additional bike lanes are supposed to be built. Their standard will be comparable to that of those supplemental bike lanes. Finally, 100 kilometers (62 miles) of bicycle highways are part of the plan. Here, the intention to let bicycles race from A to B without being slowed down or stopped by traffic lights, bus stops or pedestrian crossings every two seconds. Those highways will be 3 meters (10 feet) wide.

While many cyclists in Berlin will most likely like the Senate’s plans, the conservative opposition at the Berlin House of Representatives slammed the center-left three-way government coalition. For the CDU, Oliver Friederici stated Berlin’s outskirts were excluded. This mistake needed to be corrected quickly. He also accused the Senate of having procrastinated for too long. Now, less than 3 weeks ahead of the elections, it had decided to pass a bike lane law, all of a sudden.

Transport Senator Regine Günther is behind the plans. She said they would make Berlin “a bicycle city on an unmatched quality level” in Germany. Environmentalists and bicycle activists in the city have always welcomed the Senate’s intentions in this regard, but criticized the fact that its implementation took far too long.

So, will Berlin indeed be turned into Amsterdam? No. But, once the plans are implemented, its infrastructure for cyclists might be comparable to that of this sensational Dutch city to some extent. The Dutch will not lose their status as masters of bike lanes anytime soon.