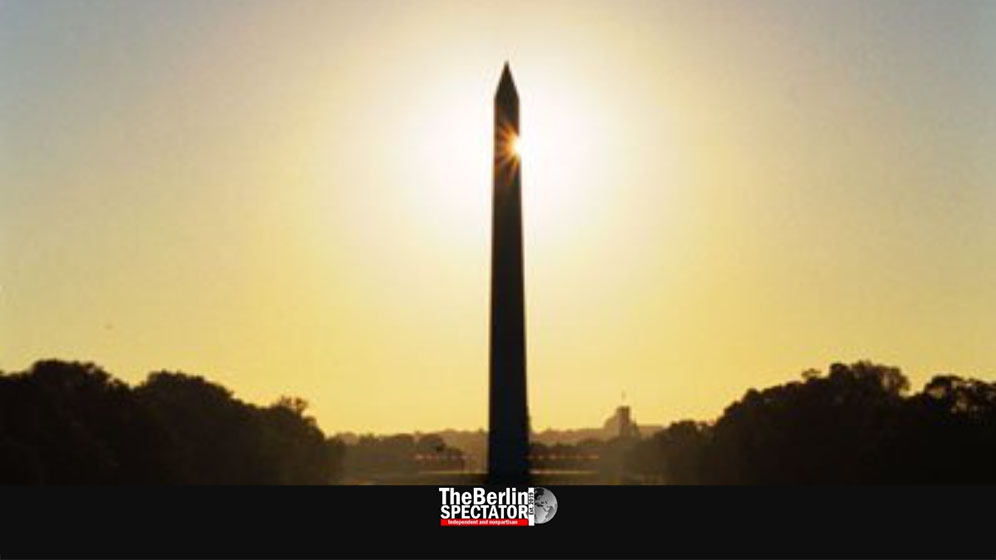 On September 11th, 2001, I did some sunrise photography in Washington D.C.. Then, the day unfolded its horror rather quickly, when the attacks commenced. Thousands of miles away, in Germany, Chancellor Gerhard Schröder knew exactly what he had to do.

Berlin, September 10th, 2021 (The Berlin Spectator) — September 11th, 2001, started early because it was supposed to be a photography day. A German friend and I had decided to meet in the D.C. at 5:30 a.m. in order to shoot the Washington Monument, the Lincoln Memorial (see main photo at top of page, which was shot on that very day), the Washington Mall and everything else we would find. The star of the morning, the Sun, was supposed to rise at 6:45 a.m., but had it known what would happen, it would have refrained from showing itself above the United States East Coast.

Coming from neighboring Virginia, I took the Interstate 395. When I drove by the Pentagon in Arlington, Virginia at 5:15 a.m., I hardly saw the impressive building since it was still pitch dark. At this point, the flight that would hit it some four hours later was still an hour away from check-in. It would take off from Dulles International Airport three hours and five minutes after this moment.

My late dog Natalie, a Corgi mix I had picked up in Croatia six years earlier, must have been pleasantly surprised about the early walk we took in the D.C., from the parking spot we easily found to Lincoln Memorial. My Bavarian pal whom I had met at a camera store in Arlington a few weeks earlier already waited for us. It was a truly beautiful day, at that point. Most wars are expected. This one was not.

The first people who must have noticed something was very wrong were on American Airlines flight 11. When it was hijacked at 8:14 in the skies over Massachusetts, its passengers had 32 minutes to live. Imagining the horror and fear they must have felt when they saw Manhattan come closer and closer is probably impossible. Just seconds before their plane crashed into the World Trade Center, United Airlines flight 175 was hijacked. The people on board had 18 minutes to live at that moment.

During the 17 minutes between the two crashes into the towers of the World Trade Center in New York City, American Airlines flight 77 was hijacked. At 9:28 a.m., the moment flight 93 was hijacked above Ohio, I was already on the phone with my radio stations while racing home to Virginia. When I drove by the Pentagon at about 9:00 a.m., the crash of flight 77 into it was only about thirty-seven minutes away.

The main radio station I had reported for, for many years, ‘Radio Hundert,6’ in Berlin, had a strong conservative tendency. Since the war against terrorism was a subject they had wanted to hear about a lot, long before 9/11, I had done a lot of research on the subject and knew Al Queda’s plans which had been uncovered months earlier. As intelligence agencies had found out before this terrible day, hijacking passenger aircraft and steering them into buildings was what these Islamists intended to do.

During the endless live interview the station in Germany did with me, Al Quaida was mentioned early on, even before flight 77 crashed into the Pentagon at 9:37 a.m. local time. Eight minutes later, at 9:45 a.m., the airspace over the United States of America was officially shut down. This unprecedented decision was taken 14 minutes before the South Tower of the World Trade Center collapsed, 18 minutes before United Airlines flight 93 was deliberately crashed into a field in Pennsylvania, and 43 minutes before the North Tower collapsed at 10:28 a.m..

My neighbor in Virginia was worried about her husband who worked in Washington. She could not reach him on his cell phone because the network was overburdened. Everyone tried to reach loved ones in the city. Many of them, 125 people, had just died in Arlington, including Barbara Olson, a commentator I knew from watching CNN a lot. She was killed when flight 77 hit the Pentagon. My family, my then-wife and my six-month-old daughter were in Europe on September 11th, 2001, and I was glad they were. The “old continent” was definitely safer on 9/11, and I was working almost 24/7 anyway, meaning I would not have had time for them.

Exactly 4,167 miles (6,706 kilometers) further east, in Berlin, Chancellor Gerhard Schröder was informed by his office manager, when the first plane had hit. In his “Die Agenda” podcast (in German), recorded a few days ahead of the 20th anniversary of 9/11, he talks about the terrible day. Just after it happened, he convened his Security Council in order to discuss the appropriate reaction. At the Berlin Bundestag, Schröder promised America Germany’s “unrestricted solidarity”. This is how the Bundeswehr, Germany’s armed forces, became part of the operation in Afghanistan, which ended only days ago, twenty years after 9/11.

As Gerhard Schröder said in his podcast, the Federal Republic had a responsibility, for several reasons:

> Since a NATO country, the United States of America, was attacked, this was clearly a case for the alliance Germany was part of as well.

> When it turned out some of the terrorists who carried out the 9/11 attacks had lived in Hamburg, the country was shocked. Because of this aspect, Germany’s responsibility grew.

> As Schröder said, the Americans had contributed a lot to keeping the peace in Europe throughout the Cold War. This was another reason why Germany could not just look the other away.

> What the former Chancellor did not mention in his podcast was the fact that America had contributed a lot to defeating fascist Nazi Germany only half a century earlier.

Saying “no” to anything the Americans would want was not an option. Schröder was not America’s biggest friend or fan. But, in this case, he insisted on “unrestricted solidarity” and even combined it with a vote of confidence at the Bundestag, just to make sure his majority would stick at this moment. But later, when America prepared to invade Iraq again, Schröder said Germany would not take part in “adventures”.

On September 11th, 2021, twenty years after the day of terror, death and fear, on which almost 3,000 people were murdered by Islamist terrorists in New York City, Arlington (Virginia) and a field in Pennsylvania, Germans will be commemorating the victims as well. This morning, on Friday, September 10th, 2021, Hamburg’s First Mayor Peter Tschentscher will be part of an event with the American Consul General Darion Akins and his predecessor Susan Elbow who was in office when the attacks happened in 2001. At the American Consulate at Alsterufer 27/28, they will unveil two commemorative plaques for the victims, in German and English.