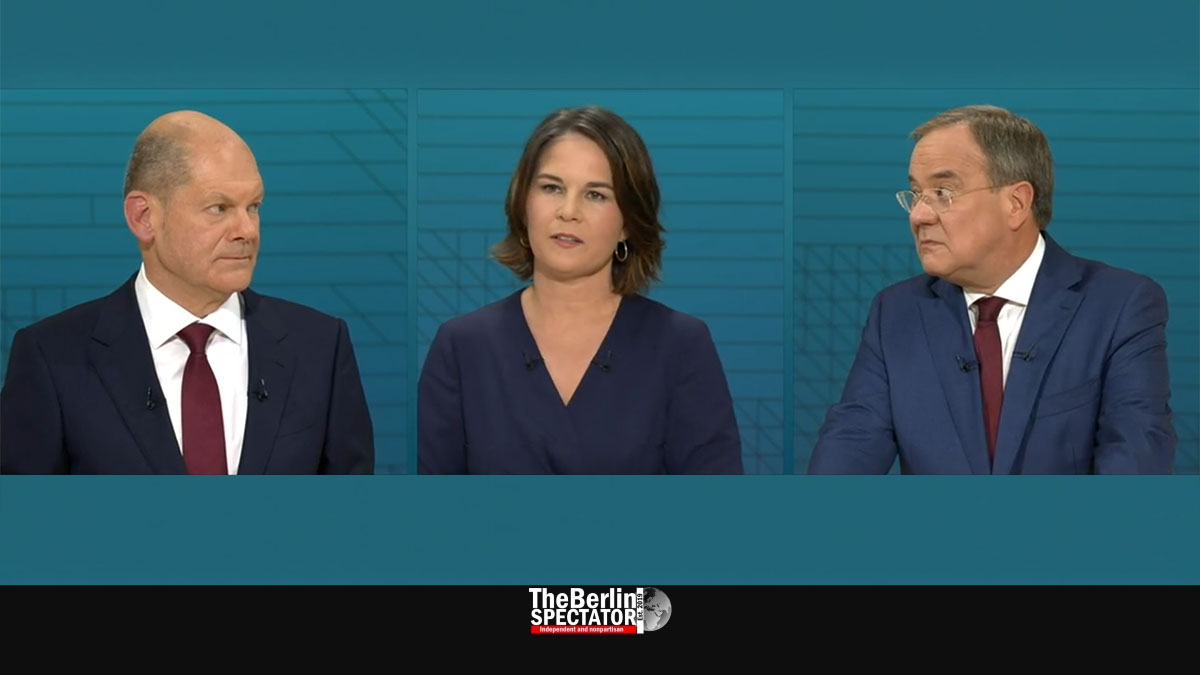 In Germany, Annalena Baerbock, Armin Laschet and Olaf Scholz, the candidates for Chancellor of the left-wing Greens, the the center-right CDU/CSU and the center-left SPD, respectively, encountered each other for a TV truel on Sunday evening. The two candidates who are trailing behind in the polls tried to make some headway.

Berlin, September 13th, 2021 (The Berlin Spectator) — First Minister Armin Laschet, the candidate whose Christian-Democratic party is now behind the Social Democrats in all major polls, verbally attacked his competitor Olaf Scholz in an attempt to gain more support. In a truel which was broadcast by the German ARD and ZDF television channels on Sunday night, Laschet accused Finance Minister Scholz of not being able to control what was going on in his ministry, because of a search the prosecution recently ordered. Scholz, who is also Vice Chancellor, rejected the allegation and explained the search had to do with a case against two individuals. He accused Laschet of conveying false impressions on purpose.

Throughout the TV show, Laschet and Scholz, whose parties are part of Chancellor Angela Merkel’s coalition government, were engaged in a cockfight mainly fueled by the conservative candidate’s attacks. Annalena Baerbock used her time to criticize her male competitors and their parties, especially in regard to their climate policies. Catchphrases were not enough, she stated, and demanded a preponement of the planned phase-out of coal energy to 2030. At this stage, Germany is planning to get rid of it by 2038.

All three candidates sounded confident at the beginning of the truel. Armin Laschet announced, the CDU would not only refrain from cooperating with the far-right AfD and the far-left ‘Die Linke’, but not even talk to them. Annalena Baerbock told the millions of viewers she was fighting for a new start “with a lot of passion”. Scholz, who has been criticized for being too moderate, became rather confrontational in the TV discussion. Asked whether he would work with ‘Die Linke’ in a coalition government, he said whoever wanted to govern the country needed to confess oneself to the transatlantic cooperation and to NATO. ‘Die Linke’ wants Germany to leave NATO and disband the organization.

Armin Laschet also sent allegations in Annalenas Baerbock’s direction. Indirectly, he accused the Green party of intending to run a policy of bans. His party, on the other hand, would take the right approach against global warming. Mrs. Baerbock countered his attacks confidently by saying neither the CDU nor the SPD were giving the climate policy the priority it needed. Instead of entering the argument between Laschet and Scholz, she tried to stick to the issues Germany and the world are confronted with.

But both Baerbock and Scholz accused Laschet’s CDU of not fighting right-wing extremism persistently enough. They mentioned Hans-Georg Maassen, a prominent candidate for the Bundestag in Thuringia who is known for remarks that could be interpreted as radical right-wing. Laschet said Maassen, who was fired as the Director of Germany’s Federal Office for the Protection of the Constitution in 2019, was a member of his party, but stressed he did not share his positions.

In this second truel on German TV, technical issues were noticeable. At the beginning of the show, an object that fell on the floor caused a loud noise while Annalena Baerbock tried to talk. She said the studio was falling apart. Minutes later, a clock which was measuring the time each candidate used for statements malfunctioned.

In less than two weeks from now, on Super Sunday, which is September 26th, Germany’s general elections will take place. On the same day, there are state elections in Berlin and Mecklenburg-Hither Pomerania.