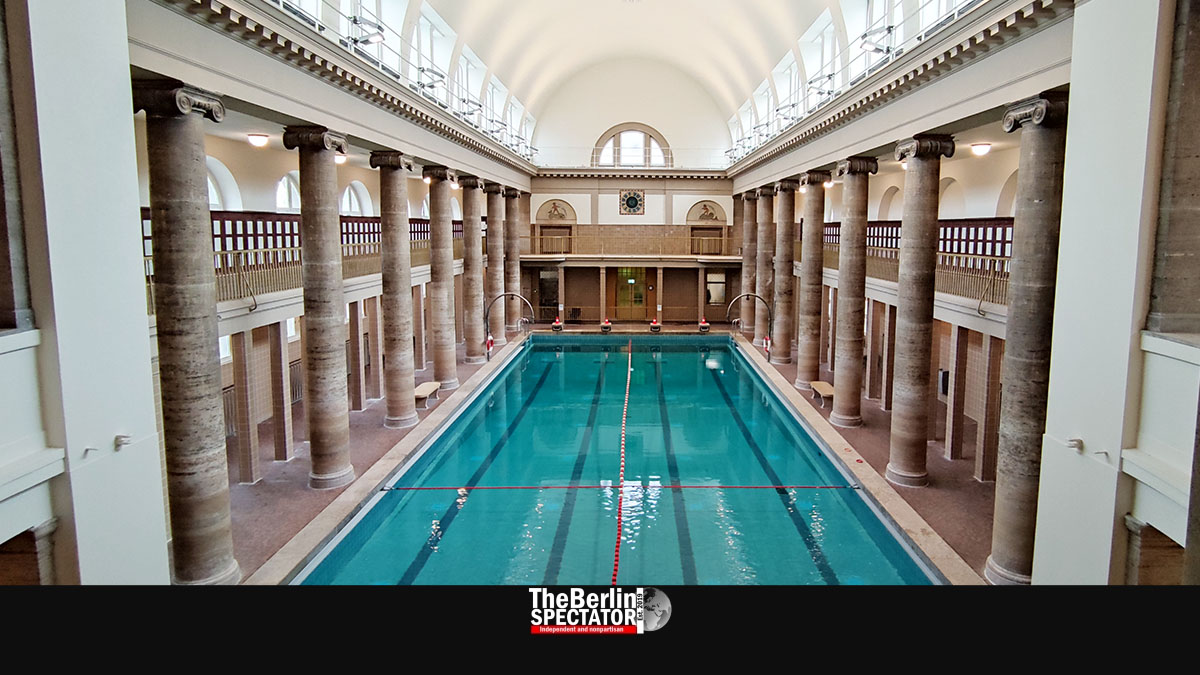 In Berlin, people are heading back to public indoor swimming pools because the summer is basically over. The city has modern pools, but also beautiful, old ones like the ‘Stadtbad Neukölln’. By the way: Three outdoor pools are still open right now.

Sofia/Bulgaria, September 16th, 2021. Update: 3:53 p.m. (The Berlin Spectator) —  Now that the leaves are falling from the trees and the Sun will be providing less warmth in Central Europe for six months, for reasons nobody ever explained at school, swimming indoors is what people do. That is why the Berliner Bäder-Betriebe, the state-owned company that runs all public swimming pools in the city, just opened a bunch of baths again, including beautiful Roman piscinas.

In the ongoing Corona pandemic, going there is a little more complicated than it used to be. Time slot tickets need to be purchased. At least the latest version of Berlin’s Corona rules does not demand that much distance between people at swimming pools anymore, meaning more visitors may enter them during each time slot. But people need to be fully vaccinated, cured from COVID-19 up to six months prior to their visit, or they need to bring along a certificate that proves they just tested negative for Corona. School kids who get tested on a regular basis and children up to 6 years of age are exempt from this rule.

Between those time slots, staffers disinfect highly frequented areas and objects people touch a lot, just before the next group is allowed to enter and hit the water. Those time slot windows usually last for two hours. Tickets for them are available four days ahead of time. According to Berliner Bäder-Betriebe, tickets can be purchased on site too, but only for the next time slot.

It is time to get those swimming trunks out of the wardrobe. The following 23 indoor swimming pools are now open:

Yes, those are lots of swimming pools and baths. Do you know what the best part is? Three outdoor pools are still open, for now:

It gets better: Two of these, the Sommerbad Kreuzberg and the Sommerbad Olympiastadion, are supposed to remain open until October 22nd and October 24th, respectively. It is the first time outdoor pools are in service well into the fall.

The indoor pools that just reopened include one of the nicest baths in Berlin. Visiting the Stadtbad Neukölln feels like time travel. This picturesque bath was inaugurated on May 10, 1914. Back then, things were obviously very different. Women and men were separated, which is why this place has a large pool and a smaller one. Today, the latter is being used for swimming courses and other events. It is also equipped for handicapped bathers.

Both pools at the Stadtbad Neukölln look Roman. Nobody would be surprised if Marcus Aurelius suddenly appeared there. But those pillars, statues and tiles look stunning, in combination with the architecture which was actually adopted from Greek objects built in those times. At this spot, it is easy to get lost in all those hallways, between the sauna and the actual Roman steam bath, which they also have, and the two pools.

In the 1980s, this beautiful bath in Neukölln was part of West Berlin. At that time, it was renovated thoroughly. Six years and 25 million Deutschmarks later, it was recreated true to the original. In October of 1988, a year before the Berlin Wall fell, the place was reopened and put under monumental protection. Another round of renovations took place in 2009. Back then, the technical part was upgraded to modern standards. Visiting this place is a great experience.

So, what does it feel like to actually swim there? We do not know. The author should have jumped into the water, but didn’t. He forgot and only took photos. The rest of the latter will be shown on The Berlin Spectator’s Facebook page soon.

In all cases, time slot tickets can be purchased online on the Berliner Bäder Betriebe website.