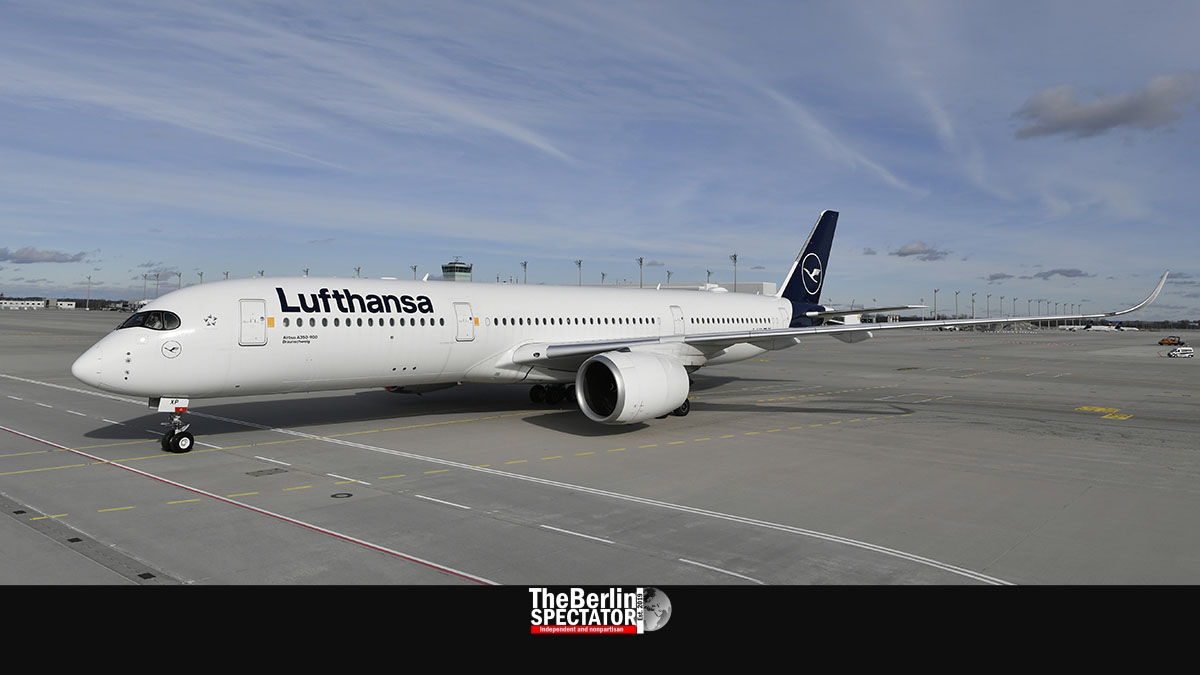 A damaged aircraft tire caused an incident in the skies above Europe on Wednesday. The pilots of an Airbus A350 owned by Lufthansa returned to Germany when they found out about the issue. For several reasons, they could not land right away.

Sofia/Bulgaria, September 16th, 2021 (The Berlin Spectator) — The passengers of a Lufthansa flight which was supposed to end at O’Hare Airport in Chicago must have been glad when they were standing on the ground again, after a 6-hour ordeal up in the skies above several European countries. According to the Aviation Herald, flight number LH 434 took off from Munich on Wednesday. Once the Airbus A350-900 had reached Glasgow, the crew was told that parts of one of their tires had been found on runway 26L at Franz Josef Strauss Airport in the vicinity of Munich.

The runway the plane used is the only one the airport has until early October, since runway 08L/26R is being renovated. This detail prolonged the time the passengers and crew of Lufthansa flight no. LH 434 were aboard the plane yesterday. The Airbus A350-900 has two four-wheel landing gears in the back and a regular 2-wheel front gear. At this point, it is unclear which tire was damaged. But the Aviation Herald reports the plane had performed a gear-down low approach at Cologne Airport, in order to give technicians the opportunity to see the damage.

A landing at Munich Airport was still not possible, for two reasons. First of all, the airport did not want to lose its only runway. There was a risk the rim under the impaired tire could have damaged the runway, or the plane could have blocked it for a long time. This would have meant shutting down the entire airport. Secondly, the giant Airbus still had too much jet fuel in its tanks. Since it was not fitted with a fuel dumping system, it had to burn enough fuel to make the aircraft light enough for landing, which is why the flight circled around Nuremberg and Munich for hours.

Finally, after more than six hours, the aircraft touched down at Frankfurt’s Rhine Main Airport, which is Lufthansa’s main hub in Germany. Flight no. LH 434 landed safely. The passengers were supposed to be sent to O’Hare Airport on a different aircraft. Lufthansa has many planes available right now. Because of the ongoing Corona crisis, the number of flights the airline sends out is still very low. Lufthansa Group, the company that owns the airline along with Swiss, Austrian Airlines, Brussels Airlines, Eurowings and Eurowings Discover, had to be bailed out by the German government last year, with a giant aid package worth 9 billion Euro (9.87 billion U.S. Dollars or 8.09 billion Pounds Sterling).

Parts of burst tires on runways can become a danger to aircraft and even cause accidents. In the year 2000, a Concorde crashed seconds after takeoff from Charles de Gaulle Airport in Paris when a piece of metal on the runway made one of its tires burst. Part of the tire damaged one of the supersonic plane’s fuel tanks. The Concorde caught fire and crashed on a hotel near the airport. All 109 people aboard, many of whom were Germans, and four persons on the ground were killed.

At this stage, there are few flights from Europe to the United States of America or vice versa, because of the Corona pandemic and the fact that the U.S. still has an entry ban for persons who have been in Germany or any other Schengen area country 14 days prior to their arrival. For decades, the North Atlantic Route has not been this empty, until the Corona crisis commenced in early 2020.