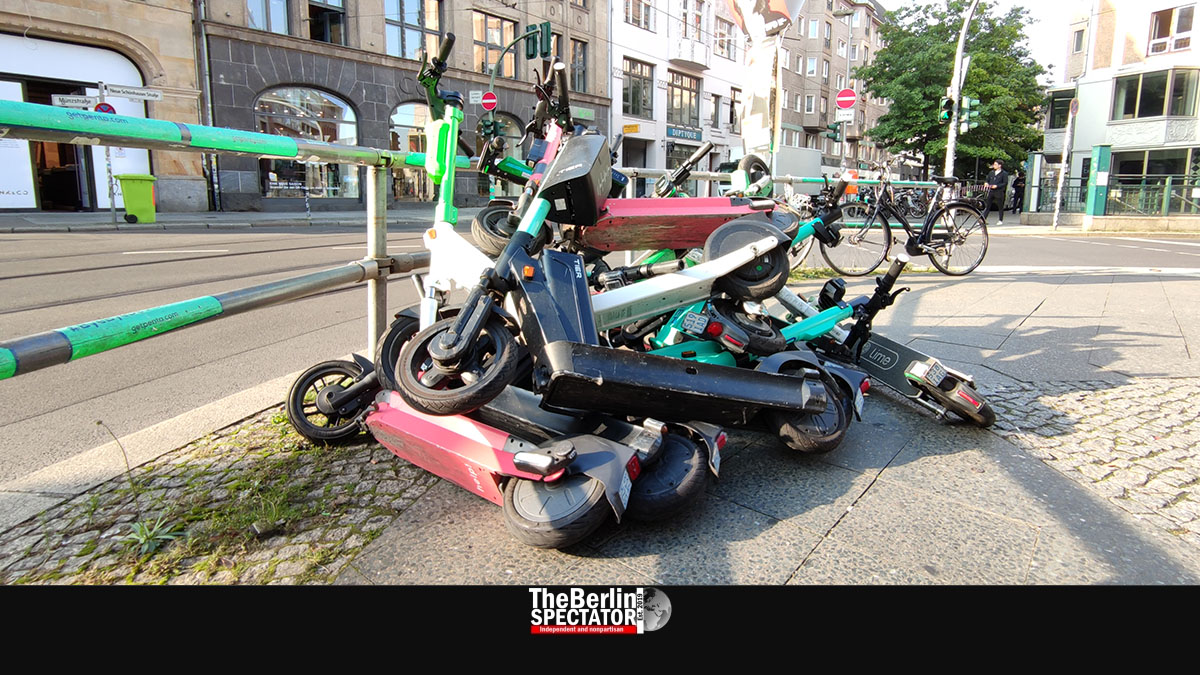 The city state of Berlin is determined to get rid of the mess caused by rental vehicles on its sidewalks. A new law is supposed to make a difference. But will it actually work or fail, just like earlier tries to control the chaos?

Sofia/Bulgaria, September 17th, 2021 (The Berlin Spectator) —  Renting an object on wheels in Berlin is easy as pie. Residents or visitors can just grab a regular rental car, a car sharing vehicle, a rental bicycle, e-bike or e-scooter. In most cases, activating an app on a smartphone, locating the vehicle and activating it is all they have to do before they use it to get to their destination. Great.

When the world was still standing, before Corona hit in early 2020, Berlin had around 13 million tourists per year, or more than a million a month, statistically speaking. They had needs. Not only did they get hungry, which meant good business for the city’s restaurants, but they also needed to sleep somewhere, which is where hotels and similar accommodations came in. And all of them insisted on moving around in Berlin. Those who wanted to see more of the German capital while getting from A to B, used e-scooters or bikes. Berliners like those vehicles too.

The demand made those rental companies add more and more e-scooters and bikes to the thousands that were already covering many sidewalks. In early 2020, there were some 16,000 e-scooters, almost as many rental bicycles and some 6,000 rental cars on the streets of Berlin. On the streets themselves, the rental cars, many of which are electric, constantly occupied the relatively few charging stations Berlin has. The problems the rental business caused on the sidewalks was — and is — far worse.

‘Special Use’ of Streets

Many people misbehave on e-scooters. They ride them in pairs, on the sidewalk, in an intoxicated state and they fail to park them properly. This means those little vehicles are all over the place. Pedestrians trip over them and parents with strollers are forced to bypass them on the sidewalk somehow. Besides, the mess they are causing does not exactly look good. This is the main issue the Berlin Senate believes it just resolved with a new law it passed.

The law makes one thing crystal clear: Companies that rent out tiny vehicles such as e-scooters on Berlin’s sidewalks need to pay. They can be charged for a “special use” of the city’s streets or pavements. In addition, the law gives Berlin a say, meaning the city can approve or deny any application by any company which wants to offer such rental vehicles. Besides, the authorities can add requirements to any permission they give to rental companies.

Those requirements will most likely include parking rules for bikes and scooters. The authorities could also force the providers to spread out their rental vehicles all over the city, instead of just in and around the two city centers Berlin has. This would resolve two of the main issues there are, in theory. Well, the providers will almost certainly try to do what the city tells them to do. But people who rent their vehicles might not. So far, many of them did not adhere to any rules either. So, will the new law resolve the big mess? Judging from the fact that previous attempts to clean up the mess have failed, it seems unlikely.