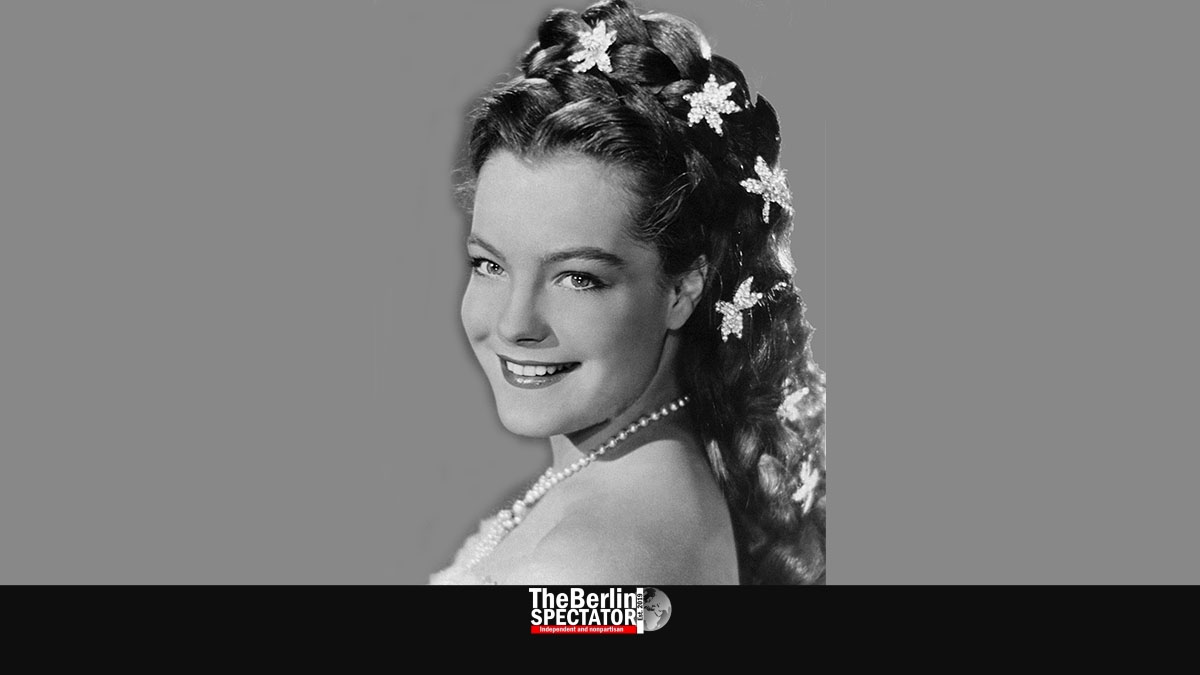 The German-French actress Romy Schneider was adored during her lifetime and still is today, almost four decades after her untimely death. Both her aura and her passion for acting are unforgotten. Romy Schneider was – and is – one of the greatest German actresses ever.

Berlin, September 23rd, 2019. Update: September 23rd, 2021 (The Berlin Spectator) —  The fact that Romy Schneider’s private life was spread all over the media made many people see her as some kind of a family member, or at least a friend they would accommodate in their living room while the TV set was switched on, or while she was smiling at them from a million magazine covers. She is unforgettable to generations.

Both France and Germany followed her while she was looking for fulfillment, both in her private life and in her acting career. It seemed she wanted everything at once. According to people she knew, she insisted on uninterrupted attention at home. And she wanted the same at the film set.

When the shooting for one of her countless movies was over, she is said to have been the unhappiest person in the world. Romy Schneider, the German diva, just could not digest the breaks in between those exciting moments of her short life.

In her early films she was the little girl from Vienna, where she was born into a family of actors. Even her great-grandfather was in the ‘business’. What she wrote into her diary while attending a boarding school for girls as a teenager might have been dictated by her genes: “I need to become an actress. I just have to.”

Her image changed over the course of her impressive career. At some point, she wasn’t that little girl anymore, but the big star from Paris, the femme fatale. All of a sudden, she did not want to be German anymore. “I want to be completely French, regarding the way I live, love, sleep and dress”, she said.

By 1963, she had obviously reached that goal, when the German ‘Spiegel’ magazine said this: “This young Parisian is not German anymore. Not at all. There is no accent anymore, or at least very little, there is no appetite anymore and no bad taste. This is a complete metamorphose.”

The German yellow press and many fans were disappointed. How could she do what she wanted to do, by moving to France? They called her a traitress, and far worse. All the love converted to anger. It became pretty ugly. But in the mid 1970-s, even the Germans forgave her.

As Tragic as Movie Characters

Romy Schneider did not only change in her private life, but also on screen. Instead of the virtuous girl, she became a sex symbol. The amount of uncovered skin in her movies increased substantially. Her makeup changed too, along with the nature of the characters she portrayed. The latter became rather tragic, in many motion pictures.

Sure, she experimented and learned over time, but the actress Romy Schneider was a genius. Since she never set foot in any acting school, not even for a minute, everyone was and still is convinced she had inherited her gift. “The camera loved her. And she loved the camera.” This is the accurate conclusion Frederick Baker came to, while working on a documentary about her.

Some colleagues and directors believed that some of the roles she played in the 1960-s and 1970-s had a lot in common with Romy Schneider herself. This was something she disputed: “Anyone who thinks I am like the characters I play, is an idiot”, she said according to Günter Krenn, who wrote a biography entitled ‘Romy Schneider – Die Biographie’.

Nobody Will Ever Know

Some say, the legendary star had two careers. Her first big success was the flick ‘Sissy’, in which she played a fairytale princess. Germany just loved that one. Back then, her mother, Magda Schneider, was quoted by the ‘Welt’ daily, saying people were into Romy so much “because they feel there finally is a creature who has not come in contact with all the filth in the world.” Her second career started later, with the more tragic and more ‘filthy’ flicks.

Romy Schneider was born on September 23rd, 1938, 83 years ago today. The circumstances of her death have never been clarified. On May 28th, 1982, she and her partner Pétin were invited to dinner at his brother’s place in Paris. On the way home they talked about weekend plans. That night, Romy Schneider wanted to stay up late, in order to listen to music. In the early morning hours of May 29th, he found her lying on her desk.

Because an autopsy was not performed, it will never be known what happened. A suicide was ruled out. At the same time, everyone knew about alcohol and tablet addictions she had been suffering from, and maybe still was, until her untimely death.

The end of her life was difficult. In 1981, she found out her trustee had misappropriated her entire fortune. Due to a tumor, she lost one of her kidneys. And her son died at the age of 14 while trying to climb a fence. But she still had her daughter Sarah, who is a product of her short marriage with her former secretary Daniel Biasini. Earlier, actually very early on, Romy Schneider was married to Alain Delon, when he was still a nobody.

At first, she kept on talking about wanting a family. Once she had one, she escaped. She was jealous when others were more successful than she was, but also warmhearted like nobody else. And she tried to live life to the fullest.

Romy Schneider’s filmography is just incredible. ‘When the White Lilacs Bloom Again’ was her first flick in 1953, in which she played the daughter of a lady portrayed by her actual mother, at age 15. ‘Sissy’, the big success, was already her sixth project. It was released in 1956, the sequel in 1957.

Later, she began playing with all of those male superstars. In the 1959 motion picture ‘An Angel on Wheels’, a romantic comedy, she shared the screen with the young Jean-Paul Belmondo. ‘Purple Noon’, the first film adaption of the novel ‘The Talented Mr. Ripley’ by Patricia Highsmith, followed in 1960. Here, Romy Schneider starred with her future husband Alain Delon.

The directors loved her too. Frederico Fellini did ‘Boccaccio ’70’ with her in 1961, Orson Welles ‘The Trial’ in 1962. Welles called that film the best one he had ever made. In ‘Triple Cross’, a truly suspenseful spy thriller, she joined Christopher Plummer and her compatriot Gert Fröbe.

Another blockbuster was ‘The Swimming Pool’, during the shooting of which she was reunited with Alain Delon, who was her ex by then, and Jane Birkin. They actually shot two versions of this one, one in French and one in English. This concept was a lot better than dubbing, at least in those days.