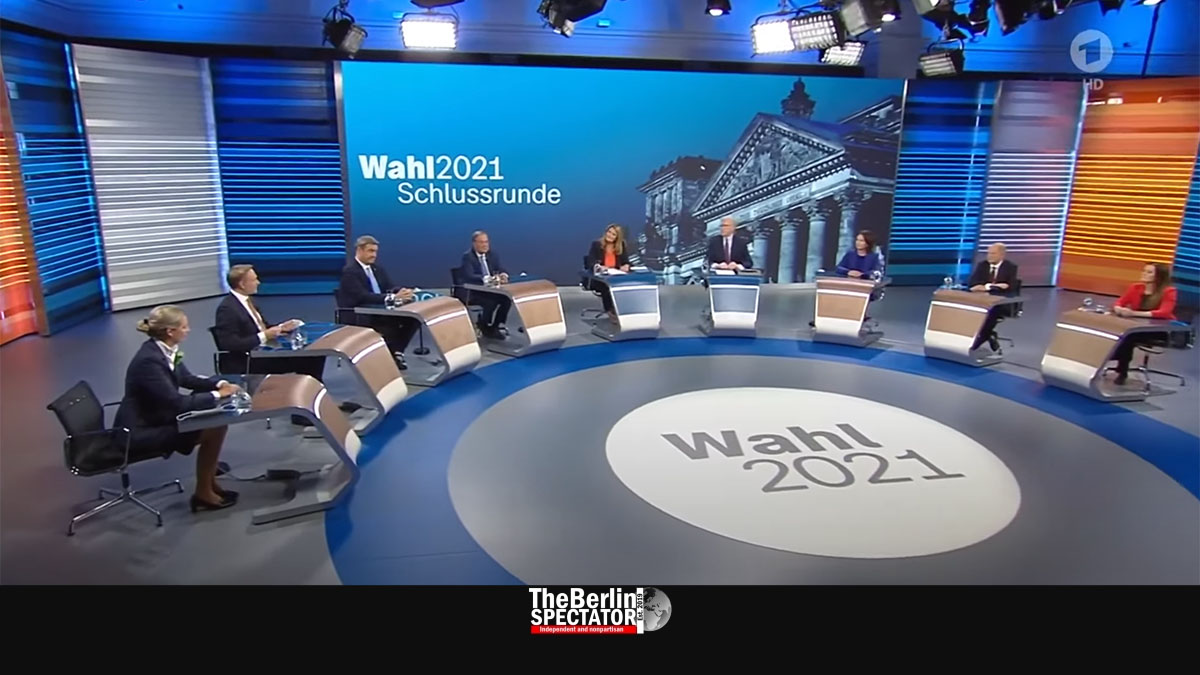 In Germany, the main candidates of the parties represented in the Berlin Bundestag clashed in the last TV debate before Super Sunday. Not all participants cut a good figure.

Berlin, September 24th, 2021 (The Berlin Spectator) — If this had been a rhetoric contest, the leaders of three small parties would have won, namely Christian Lindner of the center-right FDP who is known for very well-worded statements, Markus Söder, the head of the Bavarian CSU, which is the conservative CDU’s sister party down there, and Janine Wissler of the far-left ‘Die Linke’. But this debate was mainly about political concepts.

The discussion on the ARD network’s first TV channel also included another small party: For the extremist far-right AfD, Alice Weidel was part of it. So were Armin Laschet, Olaf Scholz and Annalena Baerbock, the candidates for Chancellor for the center-right CDU/CSU, the center-left SPD and the left-wing Greens. They clashed on several fronts, including the right way to resolve the affordable housing crisis in Germany.

Here, Annalena Baerbock partially agreed with ‘Die Linke’ by making clear her party was in favor of dispossessions of large real estate companies as a last resort. Olaf Scholz, who is Germany’s Finance Minister and Vice Chancellor, but who wants to take over the chancellery from Angela Merkel, who is calling it quits after 16 years of governing Germany, rejected dispossessions again. More public housing needed to be provided, he stated, while Laschet and Lindner dispensed accusations against their competitors on the left without coming up with convincing solutions themselves, apart from the usual suggestion: “Construct, construct, construct” which Laschet repeated.

In Germany, the Rent Cap, a concept the three-way left-wing government coalition in the city state of Berlin went for, was recently thrown overboard by the Federal Constitutional Court. The conservative “construct, construct, construct” approach has not worked either. Apart from the climate crisis and Corona, affordable housing is a big subject that will likely influence the elections on Sunday. A referendum about those dispossessions will be held in Berlin on the same day.

During the TV discussion, the candidates also touched the wide field of foreign policy. Armin Laschet said he wanted a national security council. There was an argument about Germany’s approach towards China. Generally, Laschet kept on trying to place his competitor Olaf Scholz on one level with the far-left by suggesting he would go for a left-wing coalition which would include ‘Die Linke’. This is an option some of Scholz’ party colleagues might support, but he does not. Throughout the campaign, Scholz has stated he would not cooperate with a party that wanted to leave and disband NATO. This position rules out a coalition with ‘Die Linke’.

Big differences became obvious when the participants discussed the subject of Corona deniers. The representatives for the larger parties said more needed to be done to stop the radicalization among those conspiracy theorists in Germany, online and offline. They strongly condemned the latest murder of a 20-year-old cashier at a gas station in Idar-Oberstein. The suspect in this case is a Corona denier who is being accused of having shot the victim because he was asked to follow the Corona rules by wearing a mask. In spite of the increasing violence conspiracy theorists are responsible for, the AfD’s Alice Weidel said Corona deniers should not be “stigmatized”, while First Minister Markus Söder accused them of spreading hatred, including antisemitism, increasingly.

Forty-eight hours before the elections commence, the gap between the SPD and the CDU/CSU is shrinking, according to fresh polling results released by ZDF television. If the outcome is accurate, the conservative “union parties” now stand at 23, and the SPD everyone thought was drowning at 25 percent. Under these circumstances, another grand coalition could be mathematically possible, but likely with reversed roles, meaning the conservatives could be forced to become the junior partner if they agree to this model.

On Super Sunday, September 26th, several elections and one referendum will take place:

Greta Thunberg and Fridays for Future to Stage Large Protest