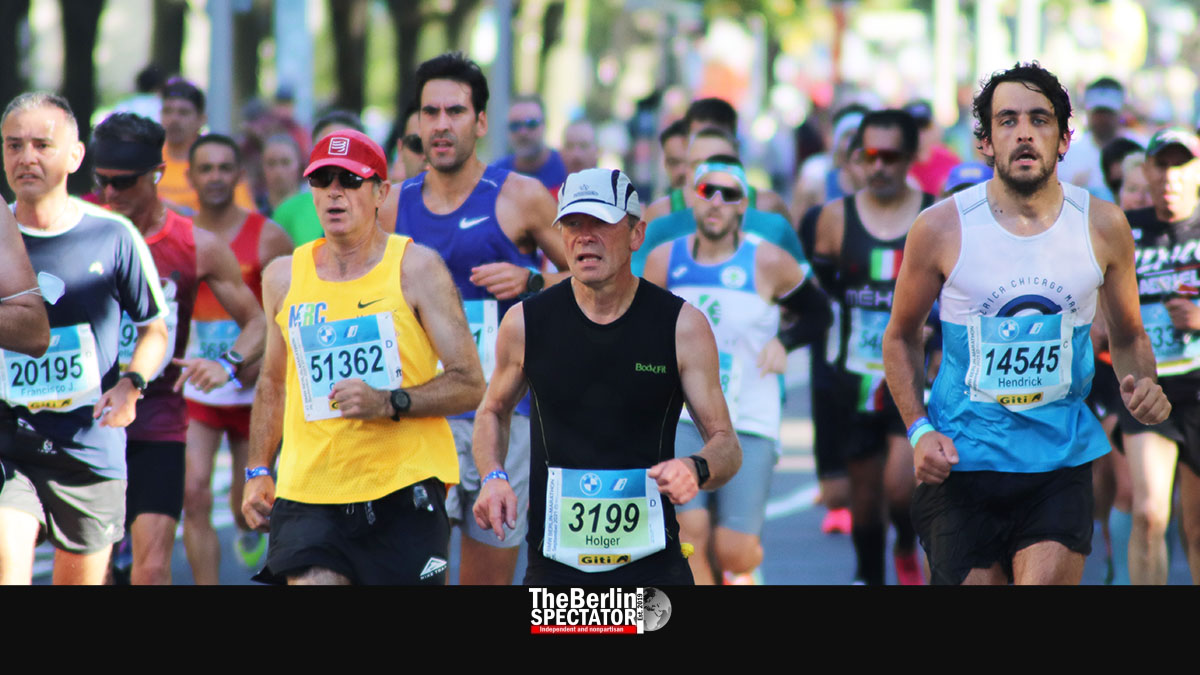 In Berlin, the first victories of the day were scored at the BMW Berlin Marathon on Sunday, when Gotytom Gebreslase became the first woman to cross the finish line. Her compatriot Guye Adola was the fastest man. No records were broken this time.

Berlin, September 26th, 2021 (The Berlin Spectator) — In Berlin, several races took place on Sunday. Most of them were electoral ones the outcome of which were not known until the evening. The first race that produced winners was the Berlin Marathon, but they were not elected. The Ethiopian runner Gotytom Gebreslase crossed the finish line at Brandenburg Gate in 2:20:09 hours. She was lighting fast, but did not break the record set by her Kenyan colleague Gladys Cherono who managed managed to do it in 2:18:11 back in 2018.

Today’s male winner Guye Adola did not break records either, but the victory he scored 2:05:45 hours after the opening gun was fired was a big accomplishment too. So far, the men have not managed to top Eliud Kipchoge’s record time of 2018, when he managed to reach the finish line after 2:01:39 hours. One wet dream many marathon runners have is to get there in under 2 hours. It will happen at some point. Today, the weather was perfect, with temperatures of around 25 degrees Centigrade (77 degrees Fahrenheit) and a weak breeze.

Kenenisa Bekele from Ethiopia was expected to win the Berlin Marathon, just like he did in 2016 and 2019. Just behind Guye Adola, Bethwel Yegon, a Kenyan national as well, came in. It took him 2:06:47 hours. Bekele completed the race just seconds later. His time was 2:06:47. A suspenseful race between the three fastest men who were far ahead of the crowd had been going on most of the time today. Among the participating women, Hiwot Gebrekidan from Ethiopia was the favorite. She came in second this time, in 2:21:32. Her compatriot Helen Tola became third by running a time of 2:23:05 hours.

When the six winners mentioned hit the finish line, many other participants were not even half way through the Berlin Marathon. To many, just making the finish line was a challenge. Others did get there quite quickly, including Rabea Schöneborn, whose time was 2:28:49. She was the first German lady to complete the race.

The event was organized well. Along the route, the Berlin Police Department and hundreds of volunteers blocked countless streets for motorized traffic. Even on bicycles, it was hard to get through Berlin today. At supply points that were spread all over the 42 kilometers (26 miles) of Berlin streets the runners had to get behind them, water, ice tea, juice and little pieces of banana were offered to the participants. For those who needed to go for pit stops, portable toilet cabins were set up.

Last year, the Berlin Marathon did not take place because of the Corona pandemic. Today, more than 25,000 runners from as many as 139 countries took part. They ran all the way from Brandenburg Gate to Tiergarten, Moabit, Friedrichshain, Neukölln, Kreuzberg and Schöneberg to Wilmersdorf, Steglitz, Charlottenburg and back to the German capital’s Mitte district, where they needed to get through Brandenburg Gate from the east in order to hit the finish line.

The other races, all those elections that are taking place in Berlin, were going to continue until the polling stations close at 6:00 p.m. local time. In all cases, the strongest contenders were supposed to win. The difference is that there is no prize money for those who win any elections, while the Berlin Marathon’s winners can reportedly expect around 40,000 Euro (46,880 U.S. Dollars or 34,257 Pounds Sterling) each.