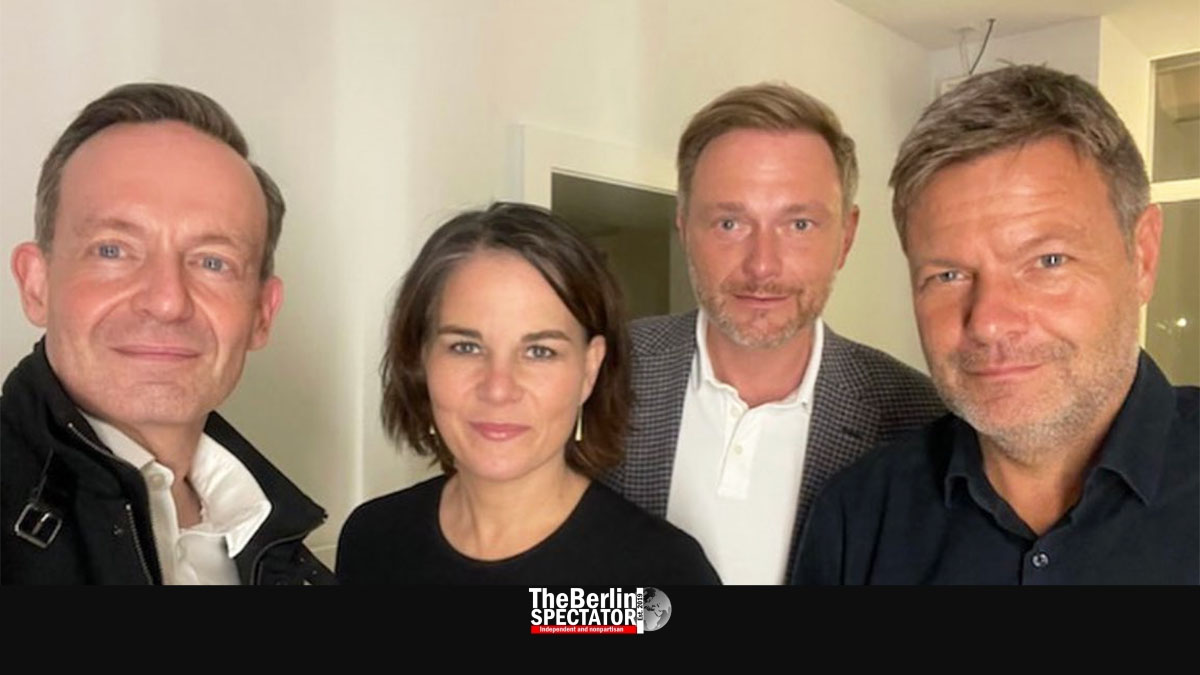 There is something the FDP and the Greens never really wanted to do, namely form a government together. But when duty calls, it might work out anyway. A selfie from Berlin spreads some optimism.

Berlin, September 29th, 2021 (The Berlin Spectator) — In Germany, the center-right, pro-business FDP and the left-wing, environmentalist Greens are opposite poles. At least they were until yesterday. Pairing them could have been compared to eating a steak with chocolate, driving a 911 and a Micra or trying to make a kangaroo play Shostakovich on a concert grand. But now that these two parties are posting good selfies, almost like the one Ellen DeGeneres shot at the 2014 Oscars, things are supposed to be different.

Actually, both parties are modern. Both are selling themselves as young. Both the Liberals and the Greens want to speed up Germany’s slow Internet connections. To some extent, both of them agree that ecology and the economy can help each other. On the other hand, the FDP tends to want to give businesses all freedoms, while the Greens want companies to follow strict rules in regard to environment protection. But this difference might be an ideological one. In practice, the “yellows” and the Greens might be closer together than they thought.

This is exactly what their leaders wanted to establish in “pre-talks”. The idea was to smoothen differences before they talk about the formation of a government coalition with the big parties, the center-right CDU/CSU and the center-left (left) SPD, which won Sunday’s elections. The purpose of the selfie above, shot by the FDP’s secretary general Volker Wissing with the chairman of his party, Christian Lindner (third from the left), and the Green leaders Annalena Baerbock and Robert Habeck was to say this: “Guys, we are on the case, trying hard.”

Before they shot the photograph on Tuesday night, they actually worked. The official goal was to find common ground on fundamental questions. Germany could be governed by a “traffic light coalition”, which would involve the SPD, the FDP and the Greens. At least in theory, there are two more possibilities: A “Jamaica coalition” made up of the CDU/CSU, the FDP and the Greens, or another grand coalition which would have to be headed by the SPD as the senior partner this time, but neither the conservatives nor the Social Democrats seem to like the idea.

All four politicians on the selfie posted it on their social media accounts with one and the same comment: “While looking for a new government, we are sounding out commonalities and bridges across differences. We even found some of those. These are suspenseful times.” Absolutely.

In the meantime, the SPD is ready to rumble. The election night on Sunday had hardly begun when the Social-Democratic candidate for Chancellor, Olaf Scholz, stressed he wanted a quick formation of a government. On Tuesday, the SPD’s floor leader at the Berlin Bundestag, Rolf Mützenich, stated the talks with the Greens and the FDP might commence as early as this week.

Of course, there is an issue: The conservative CDU’s leader Armin Laschet, wo brought home the worst election result his party ever had, wants to form a government coalition as well. The conservatives are already dealing with him. He is being criticized sharply, both for the catastrophic election result and for his statements on Sunday night when he said he wanted to form a government coalition, instead of conceding his defeat and congratulating the winner. More and more conservatives say their CDU had picked the wrong carthorse. Many had said so from the start.