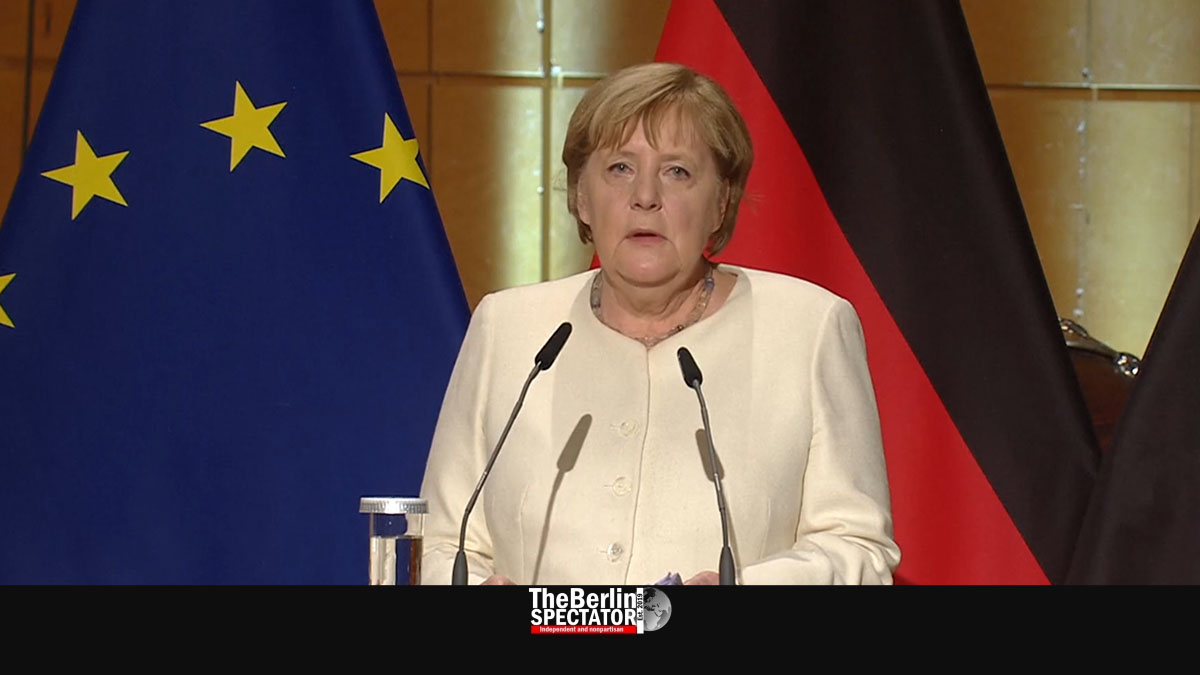 In Halle, the 31st anniversary of Germany’s reunification was observed in a ceremony on Sunday. Angela Merkel held her last reunification speech as Chancellor.

Berlin, October 3rd, 2021 (The Berlin Spectator) — Johann Sebastian Bach, Felix Mendelssohn Bartholdy and other composers were represented in Halle. So were the Federal Republic of Germany’s political leaders, including the departing Chancellor Angela Merkel. Freedom had not just come, but it had been gained, she said in her speech. The East Germans had risked a lot during the peaceful revolution in 1989.

Back then, GDR citizens who had protested on the streets of Leipzig and elsewhere had not been sure they would not be punished. In both East and West, people and states had contributed to Germany’s reunification. The trust the United States of America or France had put in Germany had not been self-evident. “Today, we can enjoy the opportunities the reunification brought us”, Mrs. Merkel stated in Halle.

She said she personally knew what a lack of freedom meant. “Now, democracy needs us like we need democracy”, the Chancellor stressed. It was necessary to work on it all the time. “Sometimes, we treat it recklessly.” In these times, there were attacks against individuals and groups in Germany because of their origin. Those constituted attacks against democracy itself. Assaults on those who were working for the common good, such as police officers and fire fighters, that had been registered recently, were shocking. “We have to ask ourselves how we treat each other and how we want to protect democracy from those who violate and despise it”, Angela Merkel said in her last reunification speech as Chancellor.

The Berlin Spectator is on shaky ground. This publication needs stability. Would you consider supporting us? There are two ways, as you can see on our Donations Page. Thank you.

The departing head of government also said people needed to recognize that, to former West Germans, the reunification had not changed too much in their everyday lives, while a lot had changed for former East Germans. There were many new opportunities, but also issues. For instance, certain kinds of professional experience suddenly had not been needed anymore. Chancellor Merkel stated the formation of Germany’s unity had still not been completed.

A lot had been achieved since 1990, she said, also because many people had been committed. Especially in former East Germany, people had taken responsibility. “We need respect for each other’s biographies, and for democracy”, she stressed at the end of her speech. Angela Merkel got standing ovations. In part, the long applause sounded like thankfulness for her work during her 16 years as Chancellor.

According to Reiner Haseloff, the First Minister of Saxony-Anhalt, the reunification was a “moment of happiness”. After the war, Germany had not expected a second chance, he said in Halle. But things had turned out differently. The eastern neighbors had paved the way, including Poland with its movement for freedom, and Hungary, which had opened its borders in 1989. The Hungarians had been precursors of the peaceful revolution in the GDR. Haseloff said the reunification had been among the happiest moments in Germany’s history in the past century.

The Berlin Spectator needs your support. Would you consider helping us to make ends meet?
There are several ways:
> You can support us via Paypal.
> You can become our patron at Patreon.
So far, we have six patrons. We are very thankful, but we need many more supporters. The total of 58 Euro per month we are receiving right now will not get us too far.
Help The Berlin Spectator grow and become more stable. The truth is that we have not been able to resolve our monetization issue since this publication was founded in early 2019, and that we are on shaky ground.
We appreciate your support more than you think.