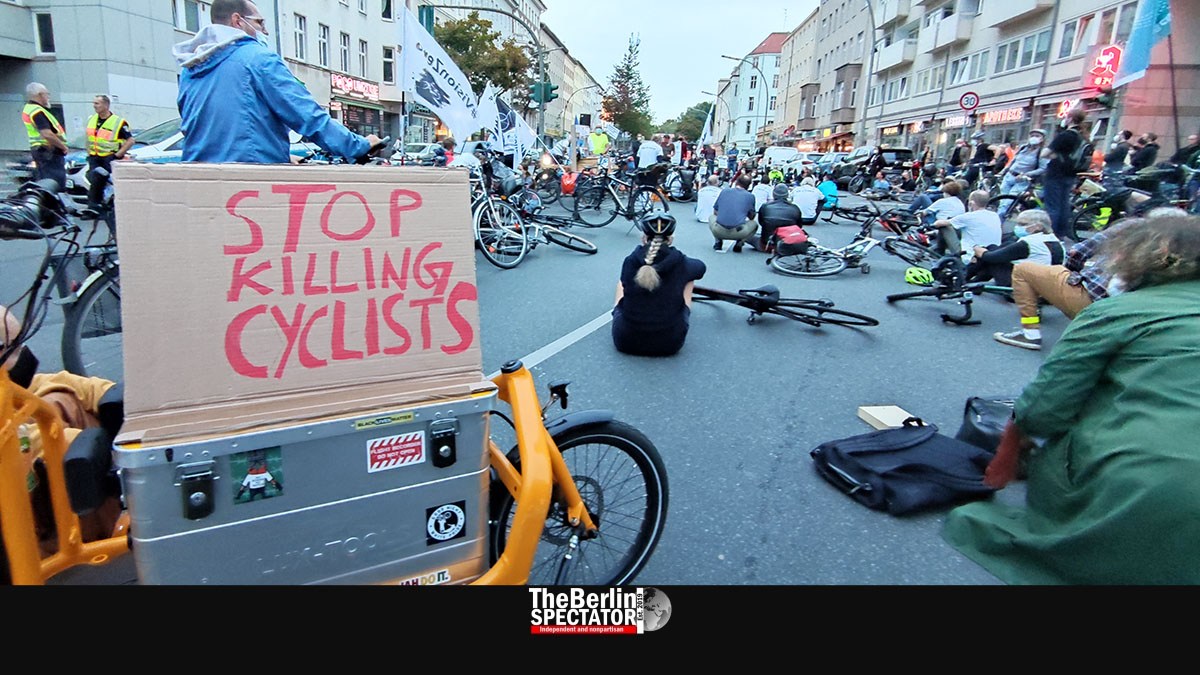 On Sunday, two NGOs staged a protest for more safety for cyclists on the streets of Berlin. Their members and supporters also commemorated two victims of accidents that happened last week.

Berlin, October 4th, 2021 (The Berlin Spectator) — In Berlin, the German Cyclists Association (ADFC), the organization Changing Cities and others commemorated two cyclists who died in accidents in the past few days. On Friday, a 29-year-old lady whose name was Maxi was killed by a truck driver who supposedly took a sudden right turn without signaling. An 86-year-old cyclist died on Wednesday of last week. a few hours after he fell for unknown reasons.

Maxi is one of many cyclists who have lost their lives in right-turn accidents. In these cases, truck drivers usually do not see cyclists who are next to their vehicles, on the right, when they take right turns. In the case of the accident that happened on Friday at the intersection of Schönwalder Strasse and Reinickendorfer Strasse in Berlin, the young woman on her bike was run over and died at the scene. She is the fourth victim of right-turn accidents in Berlin this year alone.

Especially this kind of accident can be prevented from happening, the ADFC is convinced. For the organization, Susanne Grittner took part in the protest. She said the government’s decision to require sensors that could identify cyclists next to trucks in new model vehicles from next year was not enough. According to Susanne Grittner some of those warning systems only work when the driver switches on the turn signal. In case of the latest fatal accident, the signal was not used.

Traffic safety needed to be improved now, Dennis Petri of Changing Cities stated. He demanded sensors and lower speed limits for motorized vehicles and accused the probable next Governing Mayor of Berlin Franziska Giffey and her party SPD of ignoring the dangers. The next Senate needed to become active, Petri stated. A reduction of the number of cars on the streets of Berlin was necessary, as well as a more just distribution of the available traffic area. Changing Cities wants more room for cyclists and pedestrians.

Dozens of protesters went all the way to Buch on Sunday, in the north-eastern part of Berlin, to mourn the cyclist who died there. Then, they rode to the intersection where Maxi died on Friday. The participants placed white bicycles at the scenes of both accidents, in memory of the victims. Usually, those symbols remain there for a year.

On Sunday evening, the protesters on bicycles finally went to the Ministry of Traffic, where they demanded safety measures for cyclists again. They were accompanied by police officers, both on bicycles and motorbikes, who protected them from motorized traffic.

Until today, thirty persons have died in traffic accidents in Berlin this year. Nine of them were cyclists. In regard to right-turn accidents caused by trucks, many cyclists do not seem to be aware of the danger. Keeping away from large trucks, especially at intersections, is recommended, also because truck drivers often do not act the way they are supposed to. They should move at walking speed while they take turns. If they did, cyclists would have the opportunity to move away on time, at least in most cases.