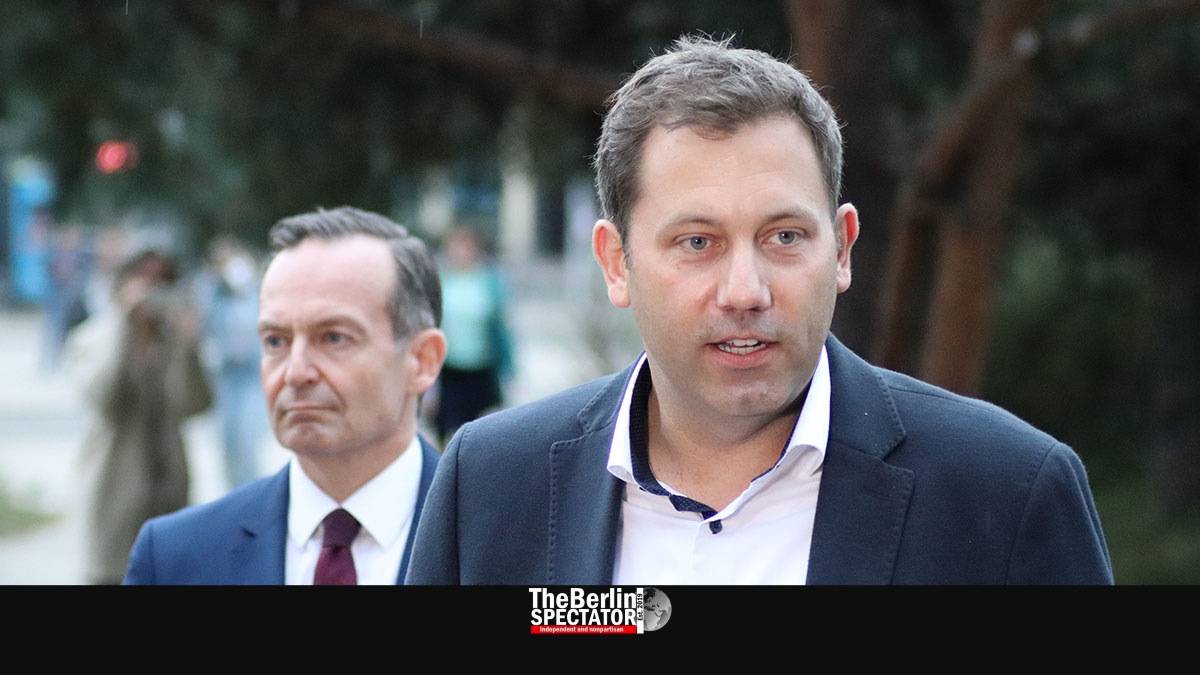 A week after the general elections in Germany, representatives of several parties held talks in Berlin. At this stage, the goal is to establish if and how they will move on to actual negotiations about forming a government coalition.

Berlin, October 4th, 2021 (The Berlin Spectator) — There was a lot of interest. All major German media sent out reporters on Sunday. They covered several press conferences with high-ranking representatives of parties who were part of talks on Unity Day. For now, the center-right SPD which won all three elections that took place a week ago, is trying to get the left-wing Greens and the center-right FDP to agree to official negotiations. “We are ready for three-way talks”, the SPD’s secretary general Lars Klingbeil stated. Before this year ends, the Social Democrats intend to form a government coalition.

After a two-hour exchange with the FDP, Klingbeil and his colleague Volker Wissing stood in front of dozens of reporters at Berlin’s Elisabeth-Schwarzhaupt-Platz, a square in the Oranienburger Vorstadt neighborhood. Saying as little as possible with as many words as possible seemed to be the task, because the parties had agreed to keeping silence on the exact content of their talks. Klingbeil did say there was a need for change after the sixteen years of Angela Merkel’s chancellorship.

Now it was time for a “coalition of winners”. In the elections on September 26th, Klingbeil’s SPD, the FDP and the Greens had gained support, while the conservative parties CDU and CSU had brought home their worst result ever. Volker Wissing said, serious subjects had been discussed. It was obvious that there were “differences on essential points”. It is no secret that the FDP would prefer a coalition with the conservatives. This became evident again after they held talks with them as well.

At another press conference that took place after a round of talks between the CDU, CSU and FDP, all of which sent big delegations, the CSU’s secretary general Markus Blume talked about “a good start”. His party was up for more. For the “liberals” (the FDP), Volker Wissing said they wanted to avoid a “deadlocked situation”. Four years ago, after the previous elections, coalition talks between the conservatives, the Greens and the FDP had stalled and failed. But the situation is somewhat different this time: The conservatives lost. They are still in the process of coming to terms with it and sorting out their personnel issue.

Would you consider supporting The Berlin Spectator?
There are two ways. Check out our Donations Page. Thank you very much.

Yet another round of talks, this time between the SPD and the Greens, took place on Sunday evening as well. Robert Habeck, one of the Greens’ two chairpersons, stated his people had met “an SPD with the willingness for a new start”, one that was ready to spark the kind of momentum needed to resolve issues. Lars Klingbeil even mentioned some of the subjects that were discussed. They included climate protection, digitization, a “modernization of the state” and Europe.

While all of the above was about finding ways to form a government coalition on the national level, more talks are being held in Schwerin, the capital of Mecklenburg-Hither Pomerania, where the SPD won as well, and in the city state of Berlin. Here, the SPD scored its third election victory on Super Sunday. In all three cases, SPD-led coalitions are the most likely outcome.

The Berlin Spectator needs your support. Would you consider helping us to make ends meet?
There are several ways:
> You can support us via Paypal.
> You can become our patron at Patreon.
So far, we have six patrons. We are very thankful, but we need many more supporters. The total of 58 Euro per month we are receiving right now will not get us too far.
Help The Berlin Spectator grow and become more stable. The truth is that we have not been able to resolve our monetization issue since this publication was founded in early 2019.
We appreciate your support more than you think.