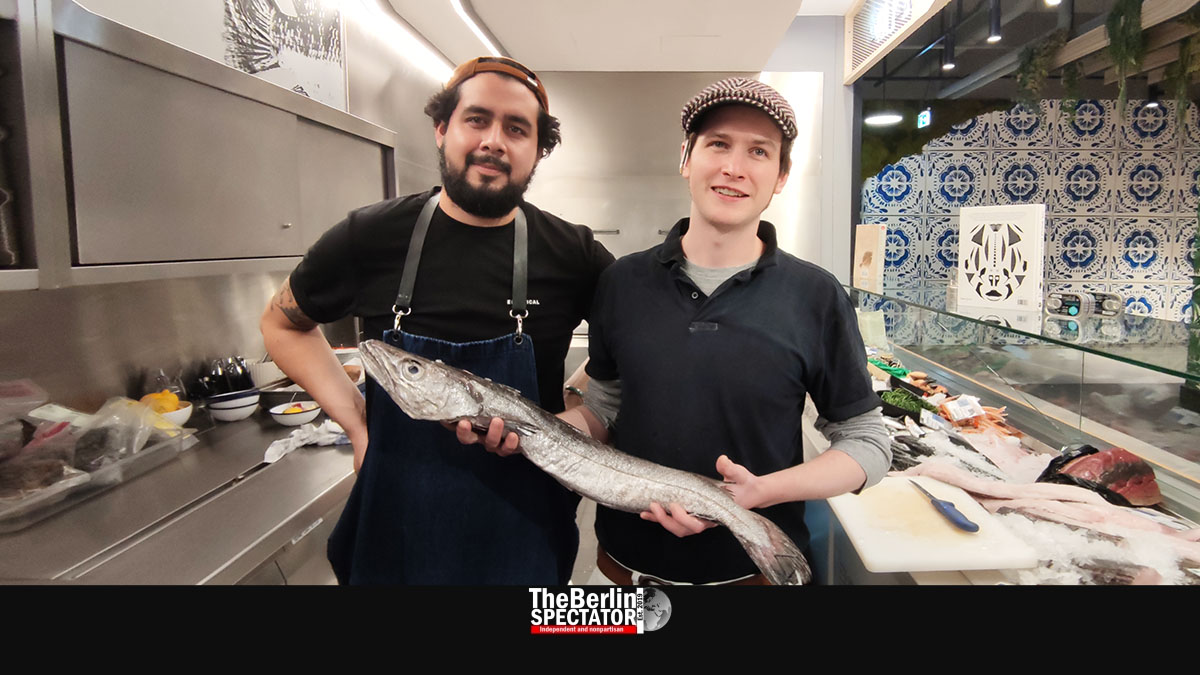 The most delicious fish on Earth is available in Berlin. And those oysters taste like they just came out of the Atlantic Ocean, because they did. Welcome to Fish Klub.

Berlin, October 7th, 2021 (The Berlin Spectator) — Looking for a seashore in Berlin takes forever because there is none. The North Sea is 200 kilometers (124 miles) away, those beaches at the Bretagne 1,500 kilometers (932 miles). Some of the most delicious and fresh fish available in Berlin is from that region in western France. Thanks to Fish Klub run by Margaux Friocourt and her very international team, the German capital recently became a fish paradise and more of a gourmet haven than it already was before.

Oysters are the first part of this experience. These are not just any oysters, but Fines de Claire Marennes d’Oléron Oysters bred by aquaculturists of the Lambert family in the region around La Rochelle. Yes, the seawater in their shells tastes as fresh and salty as the Atlantic, and the oysters themselves could not be more juicy. Consuming them makes you forget you are in a food court at the Wilma Shoppen mall in Berlin’s Charlottenburg-Wilmersdorf district. These oysters are the most delicious treat ever.

Fish Klub is not just a restaurant, but also a fishmonger, one that does things properly. It starts with the company’s unwillingness to support industrial fishing which exploits those who actually catch and deliver the fish. Margaux Friocourt cooperates with fishermen and fisherwomen whose boats are 12 to 18 meters (40 to 60 feet) long and who use low impact methods. Paying good prices for the fish is what the former gourmet magazine editor and her colleagues do. At the same time, the amounts on the price tags they put on their fish are not exaggerated, but they are at comparable locations in Berlin.

John Jones from Britain is a fishmonger who had his own business before he joined, while Francisco Hernandez from Mexico is the chef at Fish Klub in Charlottenburg (see main photo of both of them, at the top of this page). Their team at their ‘Markthalle 9’ branch in Kreuzberg is just as international, namely French, German and Israeli. Francisco is a true artist. He creates unconventional blends of taste that combine several cuisines, including the Mexican one. Depending on the fish he serves, his sauces can contain the best roasted chili pepper from his home country, French garlic and many other ingredients. The rouille he makes is stunningly delicious. It contains olive oil, garlic, saffron and cayenne pepper.

Plaice and monkfish are being served, and dozens of other kinds of fish. It always depends on the season and what is available at those fishing harbors in the Bretagne and Vendée regions. What all oysters and fish at Fish Klub have in common is the fact that they are being served shortly after they were caught. Those fresh oysters they offered on Wednesday were still in the water, at their oysters farm, on Monday. The same applies to the fish. It goes from the sea to the plate within 48 hours.

Margaux Friocourt and part of her team are about to take a 4,000 kilometer (2,485 mile) trip to western France, in order to extend their network of fishermen and fisherwomen. They catch the fish that will be served and sold in Berlin. Fish Klub also delivers it to numerous other restaurants. Individual customers can either purchase it in order to prepare it at home or just enjoy those delicious fish meals prepared by Francisco Hernadez who has been a chef all over the place, including in the United States and Israel, or colleagues whose CVs contain the word gourmet too.

Yet another aspect is essential to the Fish Klub team: According to another team member, Yves-Marie Origlia, a Frenchman who got stuck in Berlin when he became a love bird, explaining the entire concept to people and telling them what exactly they are being offered, where the fish comes from and how it is being prepared, is an important part of the mission. It all started with “oyster events”. In the past two years, Fish Klub grew and developed.

The monk fish, plaice, the oysters, but also the side dishes that were served there earlier this week were nothing less than perfect, including the self-made French fries, the green beans with garlic and even the bread baked at ‘Le Brot’, located next door at the gourmet food court. All prawns they import are from Madagascar, while the crabs are being caught around Le Guilvinec. The mackerels, sardines, blue ling and most other kinds of fish are from the Atlantic as well. According to Margaux Friocourt, her seafood products stand out in their originality, tastes and textures. She is right.

Fish Klub’s website, with detailed information, can be found here.