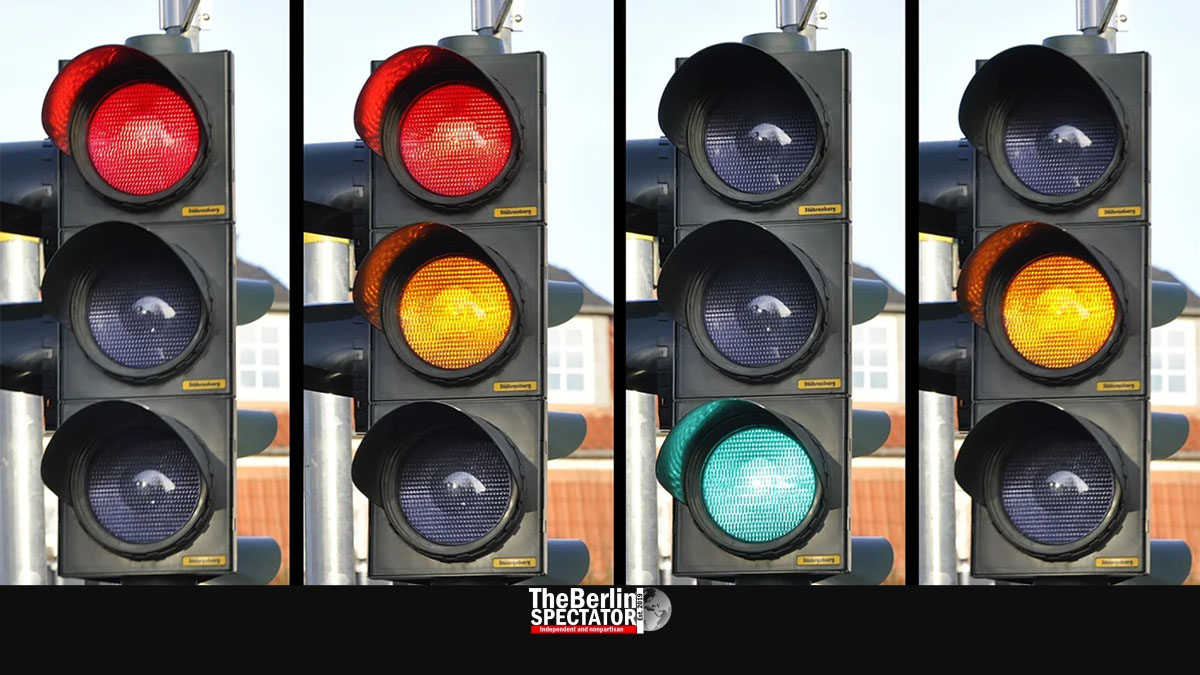 Forming a three-party government coalition can be complicated, but the next step towards the ‘traffic light’ model has been taken. As early as today, preliminary talks between the SPD, the FDP and the Greens are supposed to take place.

Berlin, October 7th, 2021 (The Berlin Spectator) — On Tuesday, the German Greens made a clear statement. After days of separate talks with the center-right FDP, the center-right ‘union parties’ CDU and CSU and the center-left SPD, the two Green chairpersons Annalena Baerbock and Robert Habeck stood in front of the cameras and said their preference was to try to form a coalition with the Social Democrats and the FDP. This was not exactly a surprise, because the Greens are obviously closer to the SPD, and they have governed with them before. But the statement put pressure on the FDP and the conservative CDU/CSU.

Robert Habeck stated, a traffic light coalition would have the biggest overlaps in regard to its members policies. This was why this model was conceivable. But he also made clear the traffic light was not carved in stone. “The cookie has not been eaten”, he said, but the rest of is statement very much sounded as if it had. So, the Greens proposed three-way talks and the FDP agreed. Then, the FDP proposed the same to the SPD, for today, and they agreed too. This will be an important day in Berlin.

The term ‘traffic light coalition’ derives from the colors of the three parties that will be part of it if they reach an agreement. The SPD is red, the FDP yellow and the Greens are obviously green. A ‘Jamaica’ coalition is the other model many in Berlin were hoping for. It would have included the CDU/CSU, the FDP and the Greens, parties the colors of which match those of the Jamaican flag. But the likelihood for this kind of government coalition just decreased substantially.

Obviously, the FDP and its more desired potential coalition partner, the conservatives, would have preferred it. But, because of some issues, the idea will likely have to be thrown overboard for good. First of all, the CDU/CSU lost the elections. Now, they are only the second-strongest political force in the Federal Republic of Germany. Secondly, they still have not really come to terms with this fact. While the CDU’s chairman Armin Laschet said he was still ready for ‘Jamaica talks’, Markus Söder, who heads the CSU, stated there was no use in pretending the world was different from what it actually looked like. Laschet’s political future depended on ‘Jamaica’. Now, the horse is basically out of the barn but he has not noticed because he does not want to. This approach does not seem to be helping the German conservatives.

Today’s talks are not supposed to be official negotiations about the formation of a traffic light coalition. They are preliminary talks in which the participants intend to establish whether negotiations of this kind area feasible. Sure, the FDP could get the Finance Ministry, the Greens the Environment Ministry and each of them could contribute policies that are existential to them. But what might sound easy is actually difficult. There are several subjects in regard to which these potential partners have very different ideas.

In regard to a minimum wage of 12 Euro (13.87 U.S. Dollars or 10.21 Pounds Sterling) per hour, the Greens and the SPD are in agreement, but the FDP is not. A tax increase for the wealthy is something the FDP made clear it would never agree to. There are different approaches on the debt limit and the climate policy too. The FDP wants to reach climate neutrality until 2050, the SPD until 2045, and the Greens even earlier. Baerbock and Habeck also insist on preponing the coal energy phaseout. At this stage, the coal is supposed to be dumped by 2038, but the Greens want it to happen by 2030.

It remains to be seen how good those three parties are at the art of compromise and whether the three parties, especially the FDP, will actually want official coalition talks. The SPD’s candidate for Chancellor, Olaf Scholz, stated he wanted to form a government which would “achieve progress in Germany”. In order to reach this goal, or any of them, his preliminary talks will have to make progress first.