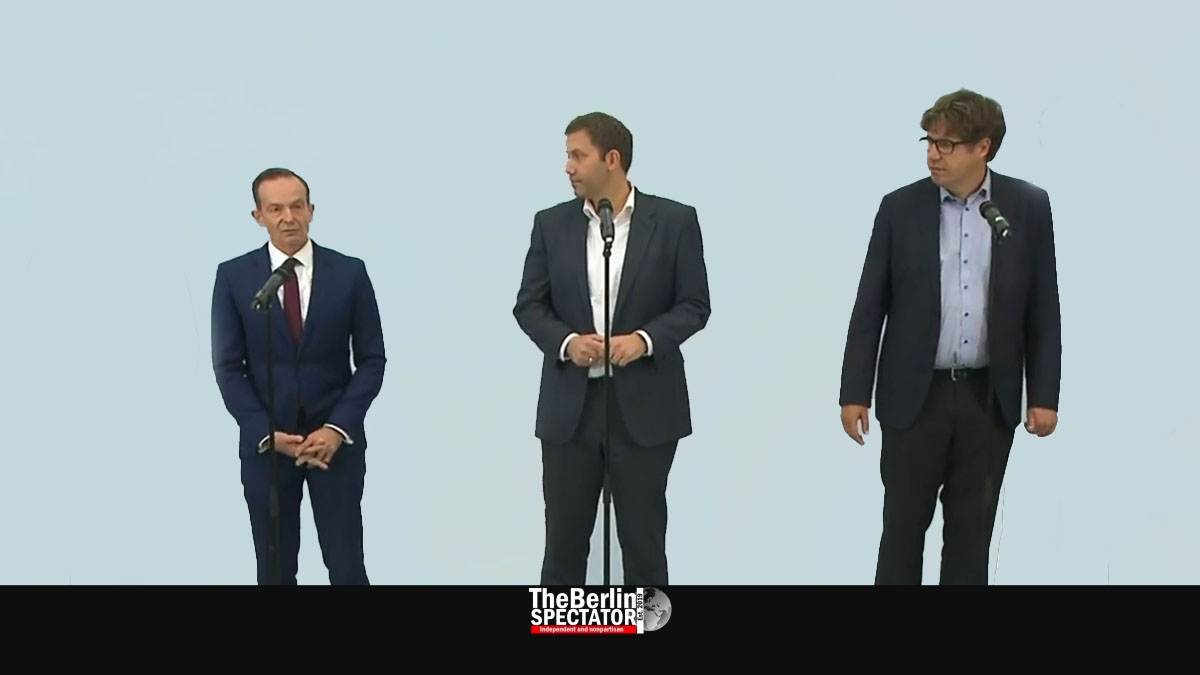 In Berlin, the center-left Social Democrats (SPD), the pro-business Liberals (FDP) and the environmentalist Greens held their first round of preliminary talks on Thursday. They agreed they were positive and announced in-depth discussions for next week. The mission is to form a government coalition for the Federal Republic of Germany.

After today’s talks in Berlin, Lars Klingbeil, the SPD’s secretary general, said they had been held in good spirits and a serious atmosphere. The task ahead was a challenge, but he had felt the three parties could achieve things together. It was important that all parties involved could bring out their priorities. The coming weekend would be used “to prepare an intensive week of talks”. Today’s exchanges had not been about exchanging polite phrases. All subjects had been discussed, Klingbeil stated.

For the FDP, the party’s secretary general Volker Wissing said the preliminary talks had went well. All sides had shown their readiness to go into more depth. He believed next week’s talks could be positive as well, Wissing said. No end had been agreed to. This means the preliminary talks will continue until there are official coalition talks, or until the participating parties come to the conclusion that there will not be a three-way coalition of this kind.

Michael Kellner of the Greens stated this had been “a good day”. He announced there would be “intense preliminary talks” on Monday, Tuesday and Friday of next week. It was a good sign that three very different parties had held trustful talks of this kind. He also said the three parties involved had decided not to announce intermediate results in the process. But, once there was an outcome, hopefully a positive one, everyone would know.

The schedule of the upcoming talks had to be adjusted to Olaf Scholz’ schedule. The SPD’s candidate for Chancellor in the recent general elections will be going to the United States of America in his role as Germany’s Finance Minister and Vice Chancellor. In Washington D.C. he is supposed to take part in the upcoming convention of the International Monetary Fund from Tuesday to Thursday. Since he is one of the most important players in the preliminary talks with the Greens and the FDP, they will take a break from Tuesday at noon to Friday morning and wait for him to return.

Just minutes after Klingbeil, Wissing and Kellner held their press conference, the conservative CDU’s chairman Armin Laschet held one as well. Eleven days after the elections for the Bundestag, he conceded his party and its Bavarian sister party CDU had not come in first, but second. But he was still ready to form a ‘Jamaica coalition’. Laschet stated he and his party would now monitor “the intensified talks held by the FDP and the Greens”. In this context, he did not mention the SPD even though it won the election and is very much involved in those talks.

Armin Laschet could not resist. He gave the Social Democrats a sideswipe by saying they were “not the right partners for a new beginning.” He also said the CDU needed to come to terms with the election result. At a party convention, the delegates would decide about a restructuring which would include the personnel as well. In the eastern part of Germany, a separate party conference is being organized. The question how the AfD could be curbed would be on the agenda, Laschet announced. In the area of the former GDR, the extremist far-right AfD is very strong. In two federal states, Saxony and Thuringia, it was the strongest party in the elections.