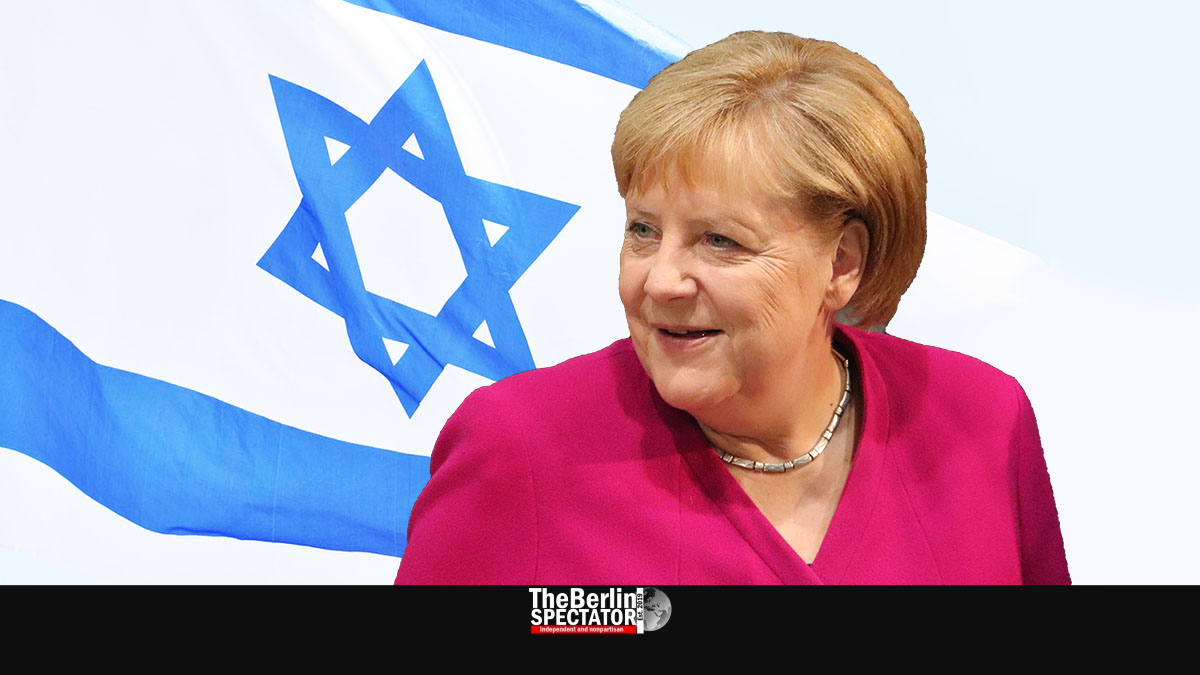 Back home in Germany, three parties are trying to form a new government coalition. While they do, Chancellor Angela Merkel is using the time for trips she wanted to take. They took her to Italy and the Vatican. Israel is next.

Berlin, October 9th, 2021. Update: 2:32 p.m. CEDT (The Berlin Spectator) — Angela Merkel looked relieved during her audience with Pope Francis. She wanted to use the opportunity for this fourth encounter with the 84-year-old head of the Catholic Church. When she did, she knew she will be leaving the chancellery within months, depending on how long it takes until her successor is elected by the Bundestag. In this situation, Mrs. Merkel seems to be able to enjoy her trips more.

After the audience, she said it had been an honor and pleasure. With the Pope, she discussed big political issues, including the climate crisis and the situation in Afghanistan, after the Americans and their partners pulled out. Another big subject came up, namely the child abuse scandal in the Church. Later, she was greeted by Mario Draghi, the eighth Italian Prime Minister she has met as Chancellor of the Federal Republic of Germany.

Everyone she visits thanks her for her work in the past 16 years. Draghi is no exception. Angela Merkel had played a “defining role” during this time, she had worked hard for the future of Europe. In several crises, she had led Germany and Europe calmly, but with determination and “serious Europeanism”. Merkel was a “champion of multilateralism”. Draghi stated he hoped to see Mrs. Merkel in Italy in the future as well. His hope will likely be fulfilled, because she is a fan of Italy. Tyrol is where she likes to spend vacations. But first, she will see Italy as Chancellor one more time, on October 30th and 31st, for the the G20 summit, unless the new German government is formed within the next three weeks, but this seems unlikely right now.

Today, another important trip begins. Angela Merkel was going to travel to Israel on Saturday. Initially, it was supposed to happen in August, but the dramatic pullout of the Bundeswehr, Germany’s armed forces, from Afghanistan made her postpone this visit. It is Sabbath in Israel, which is why her meetings with President Issac Herzog, Prime Minister Naftali Bennett and Foreign Minister Yair Lapid were scheduled for Sunday. She will also go to Yad Vashem, Israel’s official memorial to the victims of the Holocaust. At the Institute of Technology in Haifa, she will be given an honorary doctorate. On top of it all, Angela Merkel is supposed to meet the entire Israeli cabinet.

The departing head of government from Germany is being seen as a friend of Israel. In 2018, she spoke at the Knesset and said Germany had a “historical responsibility” for Israel’s safety. It was part of Germany’s raison d’etat. “This means, Israel’s security is non-negotiable to me as the German Chancellor.” Israel has not forgotten those words. But there are differences of opinion and other issues.

The support apparently does have limits. Chancellor Merkel keeps on telling the Israelis the Two-State Solution was the only answer to the Israeli-Palestinian conflict. In fact, Israel has tried to implement it for decades, while the Arabs, who started calling themselves Palestinians in the late 1960ies, rejected absolutely all peace plans which would have given them their own state. In regard to Iran, Germany seems to believe it knows better. Berlin has been trying to save the Iran Deal for years, while Israel absolutely rejects it. Another issue came up when the United States of America moved their Embassy in Israel to Jerusalem, the country’s actual capital. Back then, Angela Merkel reportedly called other European governments and pressured them into refraining from following suit.

Angela Merkel was not the only European leader who had differences of opinion with Israel’s long-time Prime Minister Benjamin Netanyahu. And she was not the only one who saw “the settlements” as obstacles to peace, without realizing that the frequent attacks against Israel, both terror and wars, started long before there were any “settlements”. Nor was there ever peace, with or without them. To the terror organization Hamas and the Palestinian Authority, which openly supports terrorism against Israel, it is not really about “settlements”, even though they use those as a pretext, but about getting rid of Israel altogether. This is what makes any peace process difficult, to say the least.

There could be a light at the end of the tunnel though: Israel’s recent normalization agreements with the United Arab Emirates, Bahrain, Morocco and Sudan are positive developments that could be used to restart the peace process, at least in theory, because those deals put the Palestinian leaders under pressure. Germany has not contributed to the latest agreements directly, but welcomed them.