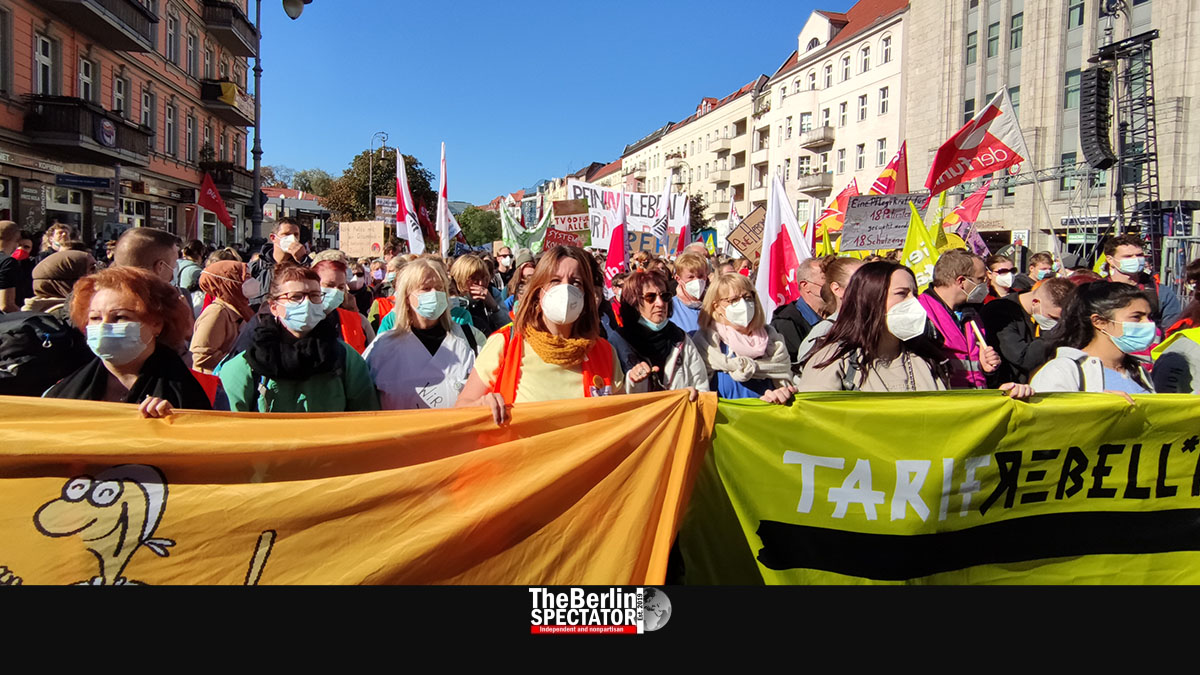 Nurses and other hospital employees in Berlin took to the streets again on Saturday. They demanded improved labor conditions. For a month, the nurses have been on strike.

Berlin, October 10th, 2021 (The Berlin Spectator) — Anywhere between 2,000 and 5,000 nurses and other staffers employed by Berlin’s state-owned Charité and Vivantes hospital chains demanded a relief of the pressure they are under at work during a rally. They called for enforcement, meaning the employment of additional nurses. Also they want everyone to be covered by collective labor agreements.

On Saturday, the protesters gathered at Hermannplatz square in Berlin’s Neukölln district. From there, they marched to the Urban Hospital in Kreuzberg and the Willy Brandt Haus, the headquarters of the Social Democratic Party of Germany (SPD), which scored a triple election win on September 26th, and will likely head the next government coalitions in Berlin and on the federal level. According to the police, the protest was peaceful, which is no surprise in the case of nurses and other union members.

Some of the signs they held said “Health instead of profits”, “We are worth it” or “Labor agreements for all”. The rally’s official motto was “We save you, but who saves us?”. The umbrella organization of unions in Germany, DGB, supported the protest. For Verdi, the member union involved here, spokespersons said the Berlin Senate needed to provide the funds required to improve the labor conditions. This was important for patients too.

Back to the Table

A month ago, on September 9th, nurses employed by the Charité and Vivantes commenced their strike. In the case of the Charité, a breakthrough was reported in the negotiations earlier this week. This is why the walkouts were ended, at least temporarily, while the parties are working on the exact wording of their labor contracts. This could take up to five weeks. In the case of Vivantes, the walkouts are supposed to be paused from Thursday, when Verdi and the employers are supposed to get back to the negotiating table.

Since early 2020, the Corona crisis highlighted the difficult conditions nurses at major hospitals work under. When the pandemic hit Germany and the health system was close to collapsing, employees were promised ‘Corona bonuses’, and virtually all politicians demanded fair conditions and higher salaries for them. In the case of the Charité, the strike mainly was about improving the conditions, while higher wages were part of the demands Verdi listed for Vivantes employees.

The Charité is one of the largest university clinics in Europe. It is spread over four campuses. There are seventeen Charité centers with more than a hundred separate clinics and institutes with more than 16,000 employees. Vivantes runs nine hospitals, seventeen nursing homes, two homes for the elderly, a hospice and other establishments.