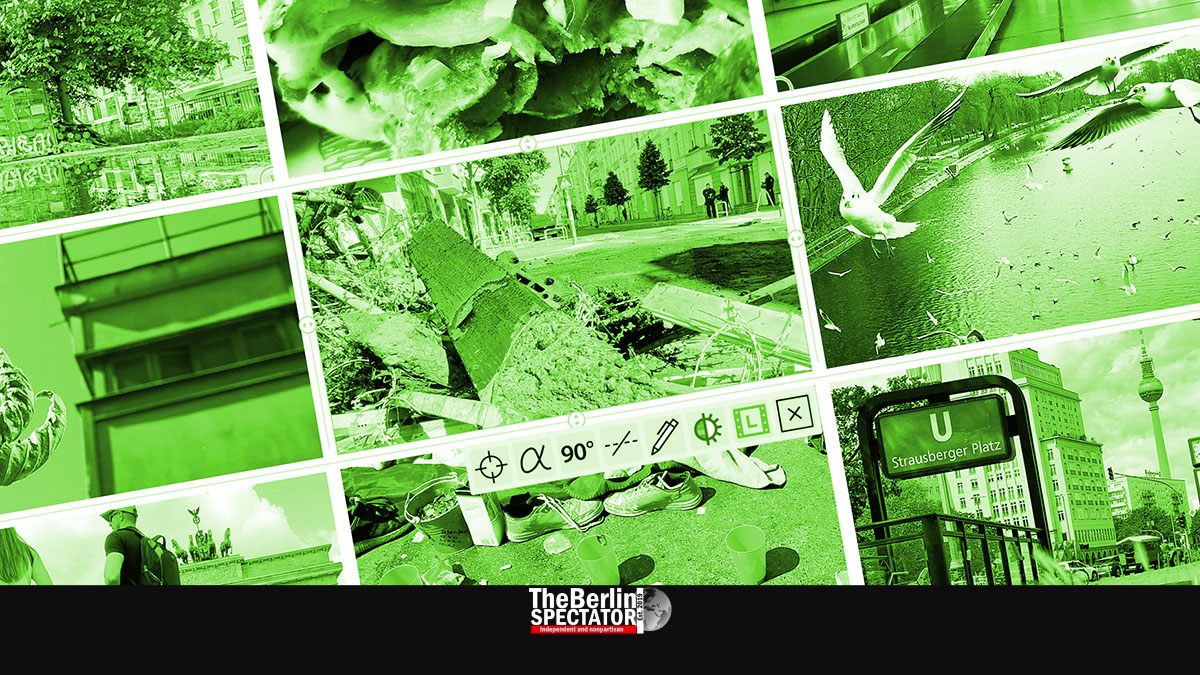 The other day, we published the “Top 10 Untypical Photos of the German Capital”. This time, it is the opposite. These pictures definitely look like Berlin, because they are Berlin. Berlin is the place. We live in Berlin, baby!

Since there is a whole lot of water, Berlin is probably wetter than the Niagara Falls. The city has 330 kilometers (205 miles) of rivers, canals and brooks, it has many lakes and its water police is very busy. So are tourist boat captains and Berlin seagulls. The birds on the photo seem to be looking for Mr. Hitchcock.

Rivers and lakes are deep, put puddles are not, unless they are as big as the Mediterranean, like this one. Berlin is full of them in fall. Add some graffiti, greenery and those typical apartment buildings. Only one city on this planet looks this way. It starts with a ‘B’, and it is not Baltimore, Buenos Aires, Barcelona, Belgrade, Baghdad or Brisbane. So, is this pic typical? Oh, yes.

Berlin is probably the coolest city on the continent. In some ways, it is even far too cool. Drugs and alcohol are all over the place. But coolness also comes along in much better, healthier and more legal ways. Music, performance in general and all other kinds of culture are big in this city, and they can be pretty cool too. So can Berliners themselves. Many of them are the personification of cool.

Berlin has a million airports, but nobody gives a damn because they are all closed. Both of them. Tempelhof was shut down in 2008, Tegel in 2020. Whoever insists on flying has to go to Brandenburg first. There was a lot of aviation in Berlin. Not anymore. But aviation history can be found at several spots. For instance, Candy Bombers used to land at Tempelhof Airport when the Berlin Airlift saved hundreds of thousands of Berliners.

If any city has a whole lot of history, truckloads of it, it is Berlin. Unfortunately, this includes the darkest part of it. In the past 90 years, Berlin was home to two mean regimes. The most terrible genocide campaign of all time, the Holocaust, was planned and headed in Berlin. Later, dictator Erich Honecker and his predecessors ruled the GDR from here. Today, Berlin is the capital of the free, democratic and reunited Federal Republic of Germany. Oddments of its recent history are all over the place.

Protests are part of democracy. As many as 5,000 of them take place in Berlin every year. Most of them are peaceful and pro-democratic, but some are not. At Rigaer Strasse, the police clash with radical squatters on a regular basis. Earlier this year, officers became the targets of an unprecedented attack.

Oh yes, Berlin is full of landmarks. And new ones are being built. The tallest of them all is one erected by the GDR regime 52 years ago, namely the TV Tower. So, you got lost in Berlin? And the battery of your smartphone just gave up because of all the selfies you shot? Just follow the tower. It will show you the way.

Before Corona, many Berliners were complaining about all the tourists in the city. In 2019, 13.5 million visited the city of cities. They ate all the Currywurst, threw their Milky Way chocolate bar packaging on the street and stood in the way everywhere. But most of them were nice people who liked Berlin. Now that Corona is partially under control, at least for now, some tourists have returned. Welcome to Berlin, guys!

We are Berliners. And politics is our middle name. At the Bundestag, the Bundesrat, the Berlin House of Representatives and in twelve district council assemblies, absolutely everything is being discussed and voted on. Berlin equals politics, and politics equals Berlin.

Fortunately, the Berlin cuisine is international. Sure, Berliners do love their Currywurst, but there is one meal they like even more. It is one that was invented (or at least co-invented) in Berlin, by Turkish migrants: Doner Kebab. But remember: There is mediocre Doner Kebab and good Doner Kebab.

Related feature: ‘Are You Sure this is Berlin?’: The Top 10 Untypical Photos of the German Capital