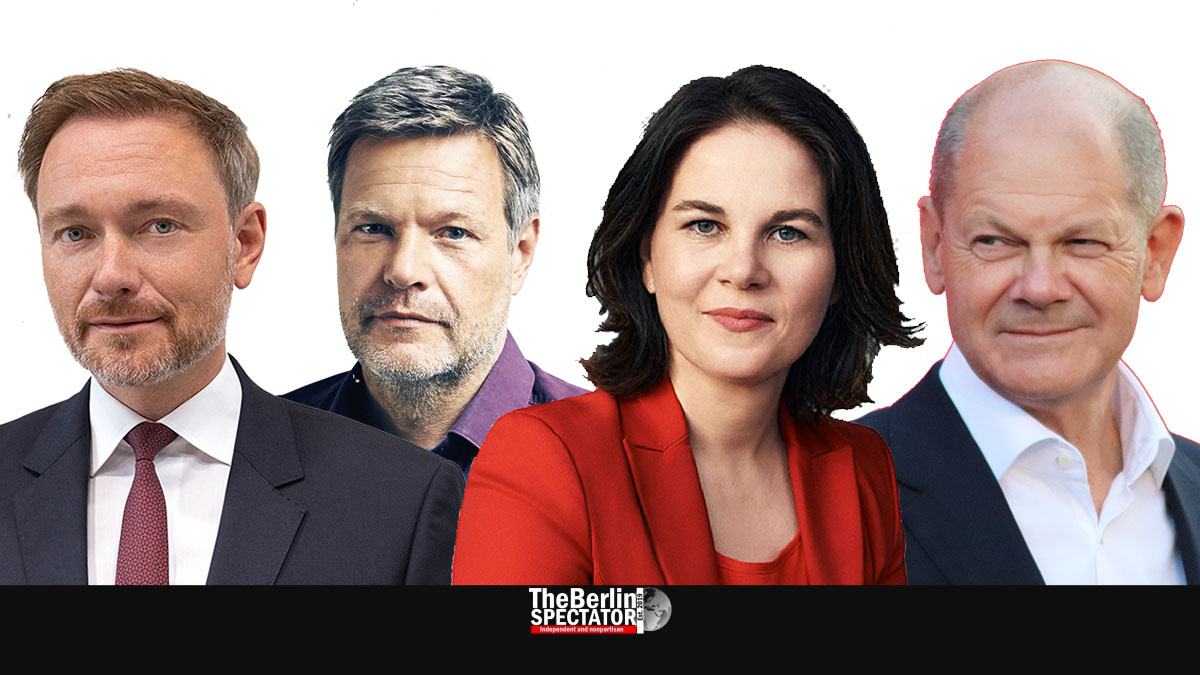 Two weeks after the elections, the talks held by the SPD, the FDP and the Greens in Berlin are still preliminary. For now, this is not about forming an actual government coalition, but about the question whether there should be official coalition talks at all.

Berlin, October 12th, 2021 (The Berlin Spectator) — The main negotiators of the center-left Social Democrats (SPD), the left-wing, environmentalist Greens and the center-right pro-business party FDP had another ten-hour round of talks on Monday. This morning, they were going to continue. For the FDP, its chairman Christian Lindner took part. So did the two chairpersons of the Greens, Annalena Baerbock and Robert Habeck. The Social Democrats were represented by their candidate for Chancellor, Olaf Scholz, as well as their chairpersons Saskia Esken and Norbert Walter-Borjans. The secretaries general of the three parties are involved too.

On Monday, even more representatives took part in several group discussions in which difficult subjects were supposed to be looked into. The main talks took place at Berlin’s fairgrounds. At this stage, the three parties are still in the first phase, meaning they are trying to see whether forming a coalition government together is feasible. Today at around noon, the main negotiators were going to pause their talks because one of them, Olaf Scholz, who is the old government’s Finance Minister, needs to travel to Washington D.C. for the summit of G20 Finance Ministers. He is expected back in Berlin on Thursday night. The next morning, on Friday, the preliminary talks are supposed to continue.

In the meantime, the secretaries general of the three parties involved, Lars Klingbeil of the SPD, Volker Wissing of the FDP and the Greens’ Michael Kellner, will keep on discussing things. According to several German-language media, the parties could decide to commence official coalition talks on Friday. Kevin Kühnert, a prominent Social-Democratic MP, told the ARD radio and TV network, he believed those official talks might be completed before this year ended, because the preliminary ones were held in a “trustful atmosphere”.

None of the participants have commented on Monday’s talks. Statements were announced for today, in the early afternoon. Last week, when the preliminary talks started, the participants had used many words to say very little, meaning they had spread the same phrases over and over, saying the discussions had been intense because there were differences, but they were optimistic and what not.

Indeed, some subjects will require compromise. For instance, the FDP says it will not agree to tax hikes for the wealthy or for anyone, the Greens will insist on a big bang in regard to Germany’s climate policy and the SPD wants a minimum wage of 12 Euro per hour. Here, they will not have any problems with the Greens, but the FDP will have to be convinced. The three players who are talking about starting coalition talks are different. Even before Germany’s elections took place, the FDP had always said its natural coalition partners were the Christian-Democratic and Christian-Social parties CDU and CSU.

But the conservatives lost the election. Also, they are busy with themselves. On Monday, the CDU’s secretary general Paul Ziemiak announced, the entire party leadership would be newly elected. But, so far, the CDU has not decided how and when it will happen. A conference of chairpersons from the districts was announced. Earlier, Armin Laschet, the party chairman who is supposed to be replaced as well, had announced he intended to “moderate the renewal process”, meaning he seems to want to keep his position as long as possible.