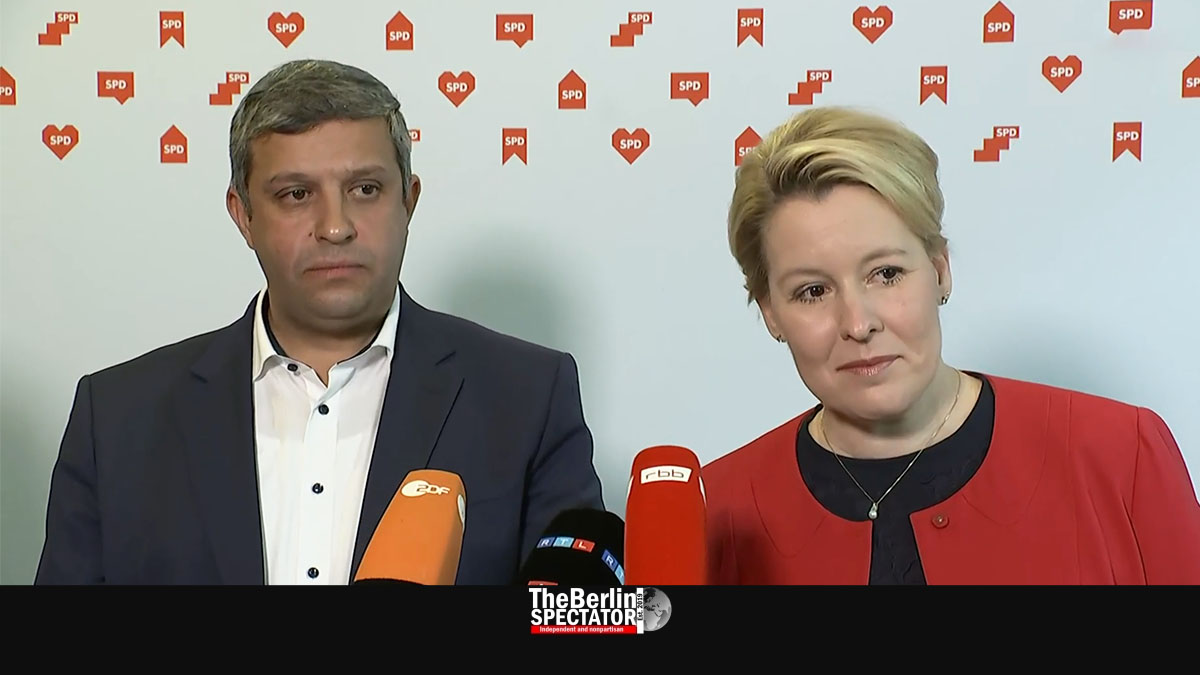 In the city state of Berlin, the next Governing Mayor Franziska Giffey made clear a continuation of the “red-green-red” government coalition has to be expected. She wants to start coalition talks with the Greens and ‘Die Linke’ next week.

Berlin, October 14th, 2021 (The Berlin Spectator) — Berlin will probably have a Senate led by a three-way center-left coalition again. For the Social Democrats in the city state, its leaders Franziska Giffey and Raed Saleh announced, their preliminary talks with the left-wing Greens and the far-left ‘Die Linke’ would be completed as soon as tomorrow. A document the parties will agree to is supposed to be the basis for official coalition talks which could commence next week.

Mrs. Giffey, who used to be Family and Equality Minister of Germany, until she tripped over a plagiarism scandal, said she wanted to complete the coalition talks until the end of November. And she showed a lot of self-confidence. Since the SPD had clearly won the elections on September 26th, her party’s signature needed to be visible and dominant in the future Senate’s policies. According to her, there was more overlap with the Greens and ‘Die Linke’ than with other parties she had discussed things with.

In regard to dispossessions of large real estate companies, which are a big subject in the German capital, Franziska Giffey is taking a cautious approach. She stated the legal implications needed to be checked before any policy would be developed in this regard. It was important to let the people have a say, but any steps needed to have a legal basis. Here, she was referring to a referendum on this question, which was won by the supporters. Throughout the election campaign, Mrs. Giffey had said she was against dispossessions, while one of her likely future coalition partners, the far-left ‘Die Linke’, is in favor.

The Greens will not rule out dispossessions, meaning they are a bit more moderate on this subject, in between the positions taken by the SPD and ‘Die Linke’. In the upcoming official coalition talks, this point will probably lead to long and difficult discussions. Had Franziska Giffey chosen to form a coalition with the conservative CDU, this issue would not have been a problem, because they firmly reject expropriations. But there would have been other differences. One option the SPD had considered was to replace ‘Die Linke’ with the center-right FDP, but it probably will not happen.

In Mecklenburg-Hither Pomerania, where the SPD won state elections as well, First Minister Manuela Schwesig said she wanted to form a “red-red” coalition with ‘Die Linke’. On the federal level, the election winner SPD is hoping to start official coalition talks with the Greens and the center-right FDP soon. In Berlin, Franziska Giffey will be replacing Governing mayor Michael Müller soon. He was basically ousted by his party, but won a seat in the Bundestag on Super Sunday. As an MP, he will not even have to move, because the city state of Berlin happens to be located extremely close to the German capital of the same name.