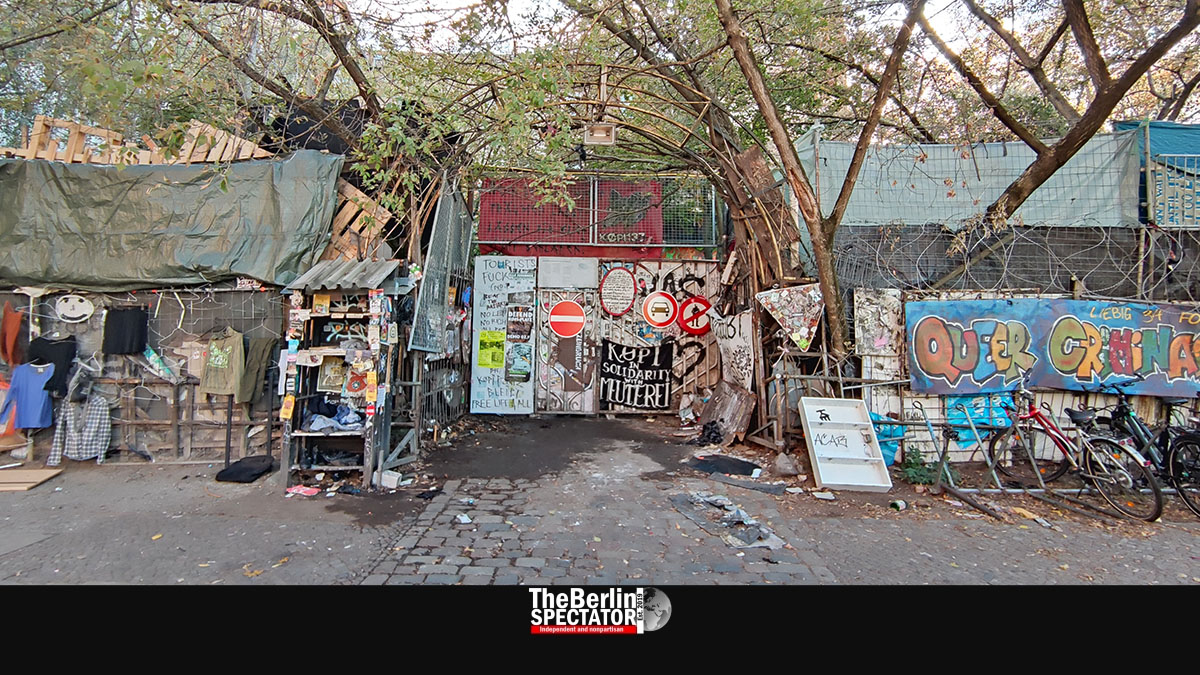 Berlin is expecting yet another street war on Friday. The Police Department is about to evict left-wing radicals from a construction trailer camp known as ‘Köpi’. Its inhabitants are preparing for what they call “Day X”, by barricading themselves.

Berlin, October 14th, 2021 (The Berlin Spectator) — In the past two years, three former havens of Berlin’s left-wing autonomist scene disappeared. A year ago, almost to the day, the police evicted an illegally occupied apartment building in Liebigstrasse, located in the Friedrichshain borough. The ‘Syndikat’, a club frequented by the same group of Berliners, was evicted in August of 2020. Another one of those, the ‘Mutiny’ in Neukölln, disappeared in March of this year. As many as 1,000 cops were part of the operation.

On Friday, another spot controlled by the radical “autonomous scene” in the German capital is supposed to vanish, namely the ‘Köpi’ trailer camp. The Berlin Police Department intended to block the streets in the neighborhood ahead of time, meaning today. Temporary no-standing zones were set up earlier this week, and protests in the direct vicinity of ‘Köpi’ are forbidden until Friday at midnight. But this does not mean there will not be rallies. The opposite is the case.

This evening, a group called ‘Reclaim Clubculture’ intends to stage a protest at Hermannplatz, a square in the Neukölln district, and a “riotty” bicycle protest from there to Friedrichshain. On Friday in the early morning hours, yet another protest against the eviction is supposed to take place. At a demonstration last Saturday, which could be seen as some kind of a preview of what will happen today and on Friday, six police officers sustained slight injuries. Thirty-four legal proceedings were initiated against protesters, according to the Police Department.

In the meantime, the inhabitants of the ‘Köpi’ construction trailer camp seem to be willing to resist the police. At the location, young men with long hair and Punk outfits were moving record collections and other items out of the camp in pushcarts on Wednesday afternoon. The entrance was guarded by several individuals. At the same time, many inhabitants seemed to be busy enforcing the fence around the camp with metal plates and concrete. Some men in similar outfits were seen standing on ladders inside the compound while they added barbed wire to the top of the fence.

Two of the individuals who were working on the fence spoke to each other in English, meaning not all inhabitants seem to be Berliners or other Germans. Signs at the entrance contained unambiguous messages according to which neither tourists nor police officers are welcome there. On Thursday, a Berlin court rejected a petition against the eviction handed in by the residents.

An apartment building at Köpenicker Strasse 137 was occupied by squatters in early 1990, shortly before Germany’s reunification. At some point, the inhabitants were legalized, when a lease was signed. But since this happened, the building and the property in front of it, which contains the ‘Köpi’ trailer camp, were auctioned off several times and three actions of eviction were filed. This time, it is actually supposed to happen. A street war is a foregone conclusion.