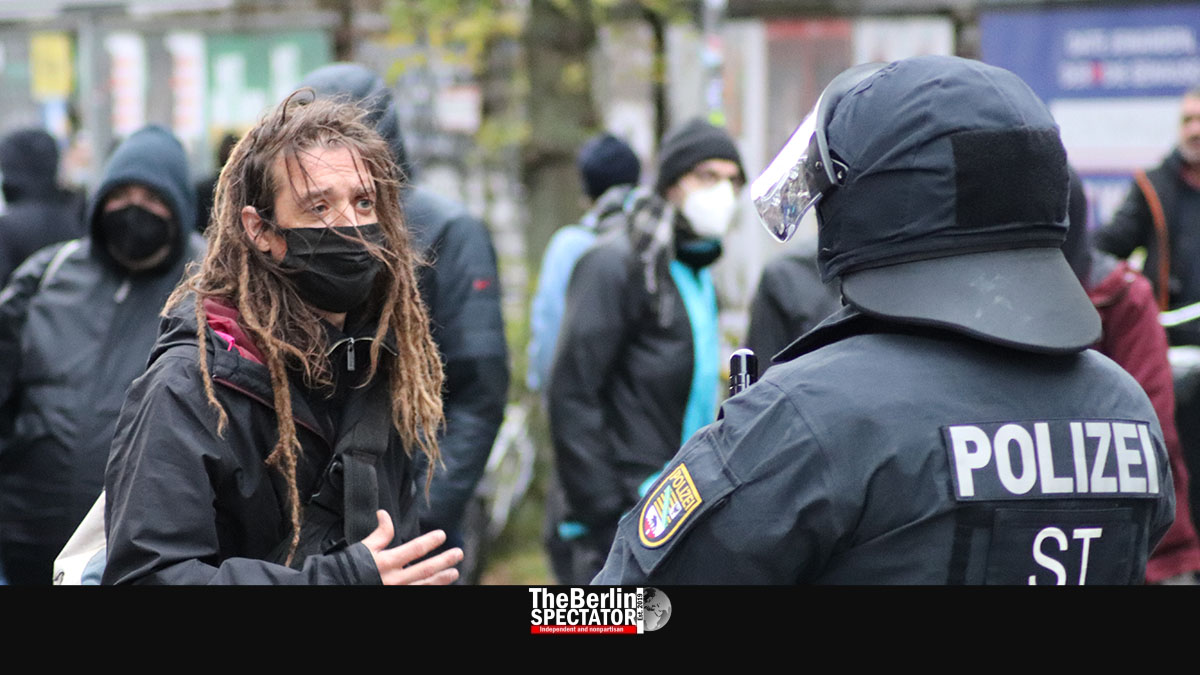 In Berlin, the police started evicting the residents of a construction trailer camp called ‘Köpi’ on Friday morning. For decades, members of the “autonomous scene’ had lived there. This era just ended.

Berlin, October 15th, 2021. Update: October 17th, 2021, 08:55 a.m. CEDT (The Berlin Spectator) — The residents of one of the last havens of Berlin’s left-wing ‘autonomous’ scene, known as ‘Köpi’, was the location of a large-scale police operation on Friday. With armored vehicles and heavy equipment, police officers broke through a high fence the residents had set up to keep them out. While the police worked on coming in, they were attacked with bottles.

The Berlin Police Department had prepared for this latest eviction, also by making sure there was enforcement. A spokeslady told The Berlin Spectator 2,000 officers were part of the operation today. Not all of them were on duty at or around the ‘Köpi’ compound at Köpenicker Strasse in Berlin’s Friedrichshain borough. Some were sent to other locations in the city, because “decentralized activities’ by protesters could not be ruled out. Seven hundred policemen and policewomen were contributed by the Federal Police and several federal states, including North Rhine-Westphalia and Saxony-Anhalt. The remaining 1,300 officers involved were part of the Berlin Police Department.

On Thursday, police had begun setting up a “red zone” by prohibiting parking. On Friday in the early morning hours, access to parts of Köpenicker Strasse was restricted. Only residents of the neighborhood and reporters were allowed in. At 5:00 a.m., ‘Köpi’ supporters staged two small protests on both sides of the restricted area. In the course of the morning, the number of participants increased to a few hundred. From inside the construction trailer camp, firecrackers and bottles were thrown over the fence.

For hours, a woman inside ‘Köpi’ kept on shouting into a microphone. She accused the state and the police of evicting residents “for a shady investor” and used many profanities. She told the police and everyone else to “f… off” in bad English English and good German, while her friends spread smoke and threw bottles. When the police started breaking through the fence at 10:00 a.m., it became evident that the ‘Köpi’ residents had enforced it with a lot of metal parts and even concrete.

It took the police a while to remove parts of the fence. They tied parts of it to their armored vehicles and ripped them out. Several police officers worked on the fence with chain saws, others used construction scaffolding in order to be able to check the situation inside the compound. In the late morning, the first officers managed to get in through cavities they had created. They reported the place was full of waste and that residents had sprayed them with fire extinguishers when they had entered the place. Police officers from Saxony-Anhalt guarded the area while their Berlin colleagues entered ‘Köpi’.

In June, the owners of the compound had filed an eviction order. A motion against the order handed in by the ‘Köpi’ residents was rejected by a Berlin court at the last moment. Therefore, the police were ordered to help with a foreclosure which was still being enforced in the early afternoon on Friday. Months ago, there was an attempt to legalize the ‘Köpi’ camp. It failed when the landlords changed their approach.

‘Köpi’ supporters had staged protests against the eviction on Saturday and yesterday. On Thursday night, a few hundred people dressed in black demanded a cancellation of the eviction during a protest march that commenced at Hermannplatz, a square in Berlin’s Neukölln district. During their rally, they snapped at reporters who photographed them, even though taking pictures of protesters is legal in Germany. After the protest, cars, tires and trash cans were set on fire last night.

Today, the police used a deception strategy, by pretending they were going to enter the compound from behind. But, in fact they suddenly did so from Köpenicker Strasse. They also ignored the fortified main gate to ‘Köpi’ and went right through the fence instead, which was probably not expected by the residents. In the early afternoon, the first residents were arrested and taken out of the compound by police officers.

After the eviction, thousands of ‘Köpi’ sympathizers staged yet another protest in Berlin. Some participants attacked the police. Several officers were injured. Trash cans and cars were set on fire. A total of 76 individuals were arrested at Köpi itself and at several protests before and after the eviction, according to the police. The violent protest on Friday lasted into the late evening hours.

‘Köpi’ is the fourth place of its kind to be evicted within two years. Recently, an apartment building occupied by squatters was cleared in Liebigstrasse. Two clubs frequented by ‘autonomists’, the ‘Mutiny’ and the ‘Syndikat’, were evicted as well. The last famous haven of Berlin’s radical left-wing scene is an apartment building in Rigaer Strasse 94.