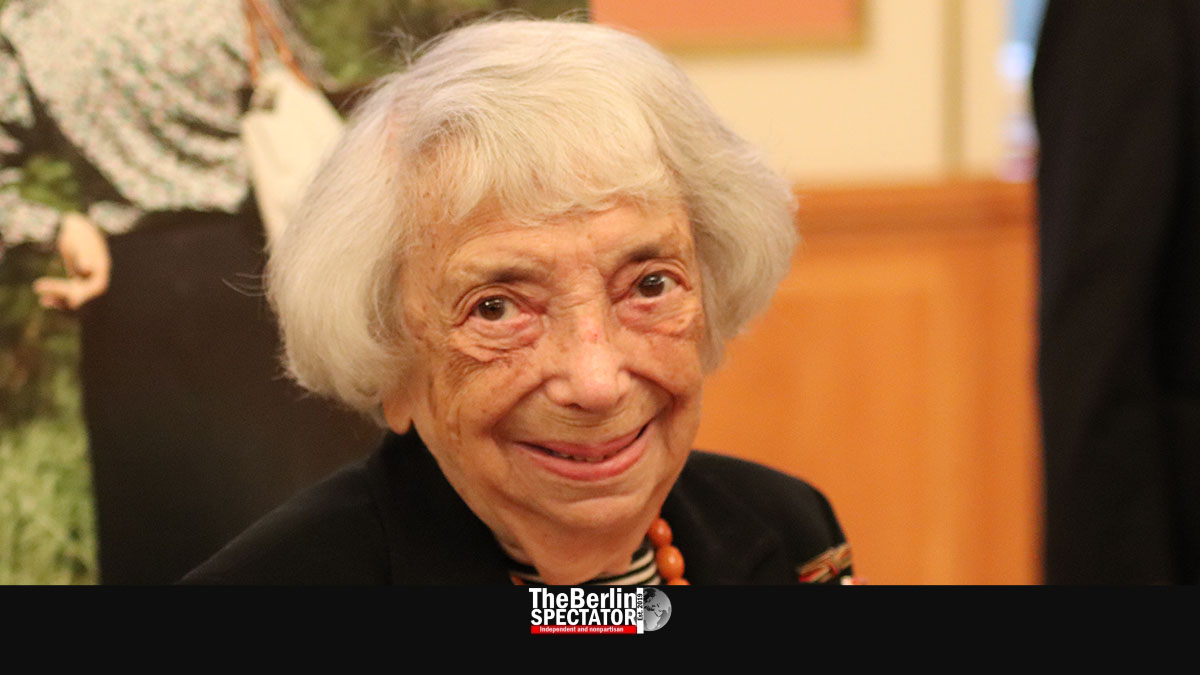 On November 5th, 2021, Margot Friedländer will turn 100. Ahead of her big birthday, she introduced a new book with portrait photos at Red City Hall in Berlin.

Berlin, October 15th, 2021 (The Berlin Spectator) — In the 1920s and 30s, Margot Bendheim lived in Berlin’s Kreuzberg borough. When the Nazis came to power, she was 12. The situation for Jews in Nazi Germany kept on deteriorating. In 1938, hiding or fleeing were the only ways to survive, because the regime in Berlin persecuted, arrested, deported and murdered Jews.

From Theresienstadt to America

Margot, her brother Ralph and her mother were going to leave, but it was too late. Ralph Bendheim was arrested by Hitler’s Gestapo. Her mother turned herself in because she wanted to protect her son. Both of them were murdered in Auschwitz. Just before her deportation, Mrs. Bendheim had asked neighbors to pass on a short message to Margot: “Try to make your life”. What she meant was that her 17-year-old daughter needed to make it on her own. Margot Bendheim never saw or heard of her mother again.

During most of the war, until 1944, she managed to hide in Berlin. In order to look Christian, she wore a cross on a chain. Someone betrayed her a year before Europe was finally liberated. The Nazis took her to the Theresienstadt concentration camp, which she survived with her future husband Adolf Friedländer. In 1946, they went to the United States where they became citizens. Her husband died in 1997.

‘This is My Mission’

In 2003, when Margot Friedländer was 82 years old, she was invited to come to Berlin, her birth city, for a visit. In 2008, her autobiography entitled ‘Try to Make Your Life‘ was released. The subtitle is “A Jewish Girl in Nazi Berlin’. Two years later, in 2010, she finally moved back to Berlin, at the age of 89, after having lived in the U.S. for 64 years. In Germany, she started visiting schools to tell students about her life and the need to fight anti-democratic tendencies before it is too late. Since, she has received awards and became an Honorary Citizen of Berlin.

Wolfgang Schäuble, the President of the Bundestag, came to the presentation of her book of portrait photographs on Thursday, at Red City Hall in Berlin. He and Governing Mayor Michael Müller honored and thanked Margot Friedländer for returning to Germany. “This is my mission”, she said when she was being asked how she had managed to be such a cheerful person in spite of what she had gone through, and in spite of the fact that she kept on telling people about the terrible events back then in Nazi Germany.

‘My Brother Did Not Have a Chance’

Humans had committed those crimes, she said. Humans had not recognized other humans as such. “This is something that really hurts me and that I cannot comprehend.” Margot Friedländer stated what she was doing now was for the youth. Young people needed to know what had happened in order to know it should never happen again. “My brother did not have a chance. But the young people today do. They should not throw away their chance. It is theirs.”

When she was being asked whether she felt mostly like a Jew, like an American, because she had lived in the U.S. for so long, like a German or like a Berliner, she replied: “Like a Berliner, of course!” She got a lot of applause by the 70 people at yesterday’s book presentation event.

The new book ‘Ich lieb’ Berlin‘ contains new portrait shots of hers taken at ‘Anhalter Bahnhof’ train station. This is where the Nazis deported her from on June 16th, 1944 at 6:07 a.m.. More photos of her were taken in her apartment in Berlin’s Schöneberg borough, at Skalitzer Strasse in Kreuzberg, where her brother and mother were deported from, at her former school at Grosse Hamburger Strasse and other places. All photos were taken by Matthias Ziegler. President Frank-Walter Steinmeier wrote the introduction.

Margot Friedländer does not seem like 100, but more like 70. She is not only a kind lady, not only a Holocaust survivor who made her life, not only a living history book, but also a true Berliner and a good person with a big heart and an important mission. All the best to you, Mrs. Friedländer.