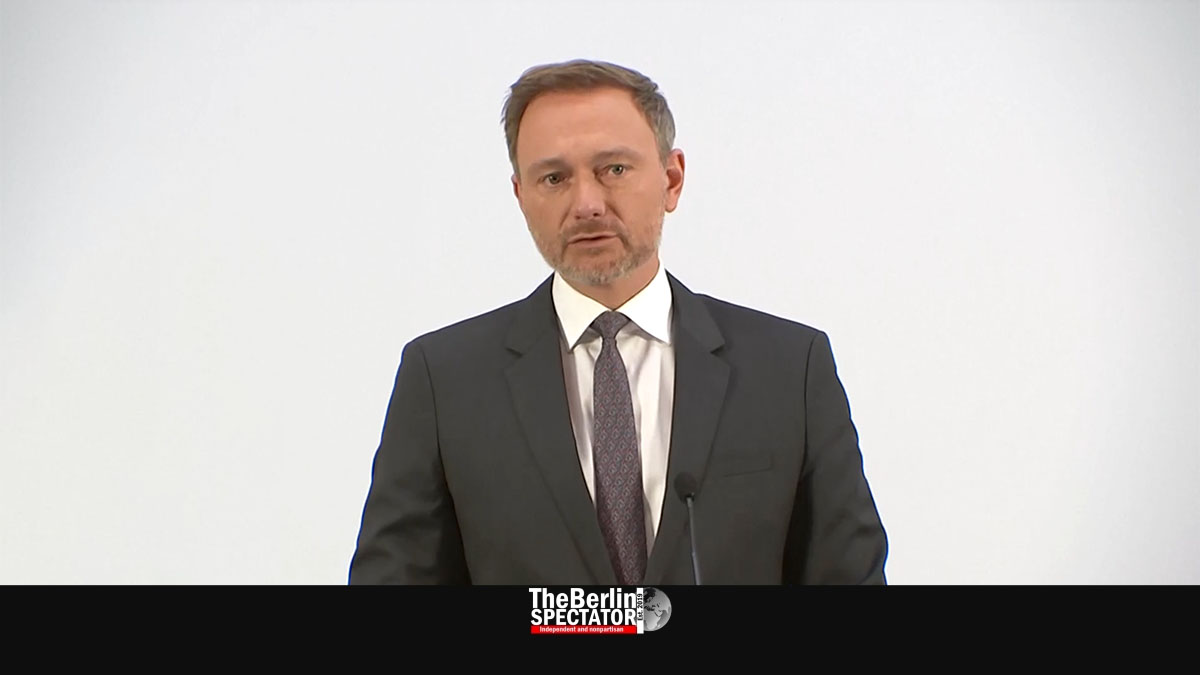 Some three weeks after the elections Germany, the preliminary talks in Berlin are over. Official coalition talks are supposed to begin later this week. This applies in the city state of Berlin and in the German capital, which is the same place.

Berlin, October 19th, 2021 (The Berlin Spectator) — In Berlin, the capital of the Federal Republic of Germany, sideswipes were exchanged yet again. The other day, when the center-left Social Democrats (SPD), the left-wing Greens and the center-right Liberal Democrats (FDP) had signed a document with basic points which are supposed to be the basis for official coalition talks, the conservative Christian Democrats (CDU) seemed to be jealous. Their floor leader at the Bundestag, Ralph Brinkhaus, commented on the agreement by saying it was “the tightest left-wing agenda Germany has had in decades”.

Attacking Christian Lindner, the FDP’s chairman (see photo at top of page), directly or indirectly, is never a good idea, because he is good at shooting back, from the hip. On Monday, he stated the partnership his party would now create with the SPD and the Greens would be “a coalition of the political center”. The FDP was the “guarantor” for this approach. Then, Linder struck out and hit Brinkhaus: Whoever saw the agreement as a shift to the left probably wanted to lead his own party towards the right, he said.

Throughout the election campaign, and right after Super Sunday, Lindner and his people had stressed they saw many more overlaps with the conservatives. They made clear the CDU/CSU was their natural coalition partner. But, as it turned out, the ‘union parties’ are not in a good state after they suffered a triple election defeat on September 26th. In the federal states of Berlin and Mecklenburg-Hither Pomerania and on the federal level they got terrible results. Afterwards, they started talking about a renewal, without actually implementing it. Their expressed intention to form a federal government on the federal level in spite of having come in second sounded like a desperate attempt by their failed candidate.

After intensive preliminary talks, the leaders of the SPD, FDP and the Greens held until Friday of last week, all three parties agreed to official coalition talks. The FDP was the last party to do so. Things are not easy for the Liberal Democrats, first of all because they are the only partner with a more conservative approach. This means they have to convince their followers they will not agree to left wing agendas and show they are not giving in to exaggerated demands voiced by the SPD or the Greens.

The whole thing is tricky, also because of the FDP’s history. On October 1st, 1982, thirty-nine years ago, they changed horses in midstream by leaving the government coalition they ran with the SPD’s Chancellor Helmut Schmidt and pairing with the CDU’s Helmut Kohl. Back then, many supporters accused them of treason. Members, including prominent ones, who were part of the FDP’s left wing were outraged and left the party. The Liberals obviously want to avoid being accused of treason again, no matter what direction allegations of this kind might come from.

Of course, the SPD and the Greens know the FDP has to show its voters it will not give in too much. That is why both of those parties had to make sacrifices for them. Those are visible in the direction they are taking in the fiscal and debt policies, since the FDP rejects both more debt and tax hikes. The Greens even gave away one of their central demands which they had pushed for five decades, namely a general speed limit on the Autobahn.

On Monday, Lindner stated the three-way coalition he was trying to form would require a lot of tolerance. “A new way of thinking” was required too. He also stressed the paper the FDP had agreed to with the SPD and the Greens contained “far more liberal policies” than the CDU and the Greens had been ready to agree to in 2017. Back then, Lindner suddenly walked out of coalition talks he had been in with Angela Merkel and the Greens. Because those talks failed, yet another grand coalition was formed four years ago.

Now, the official coalition talks are supposed to commence before this week ends. The negotiations will not be smooth, meaning there still are major differences. Besides, both Lindner and the Green co-chairman Robert Habeck seem to want to become Finance Ministers. But, all in all, the three parties are optimistic they will be able to form a coalition government on the basis of compromise. Everyone gives and receives. The coming days and weeks would be “suspenseful”, Linder predicted.

In Berlin, the same city, more coalition talks are about to start, on the state level. The SPD’s Franziska Giffey wants to become Governing Mayor by building a three-way center-left coalition with the Greens and the far-left ‘Die Linke’. Tomorrow and on Thursday, “advance talks” about specific subjects are on the agenda. On Friday, the actual negotiations are supposed to commence. ‘Die Linke’ still has to agree to those talks beforehand, but they will. In both cases, in Berlin and in Berlin (!), government coalitions could be ready to rumble before Christmas.