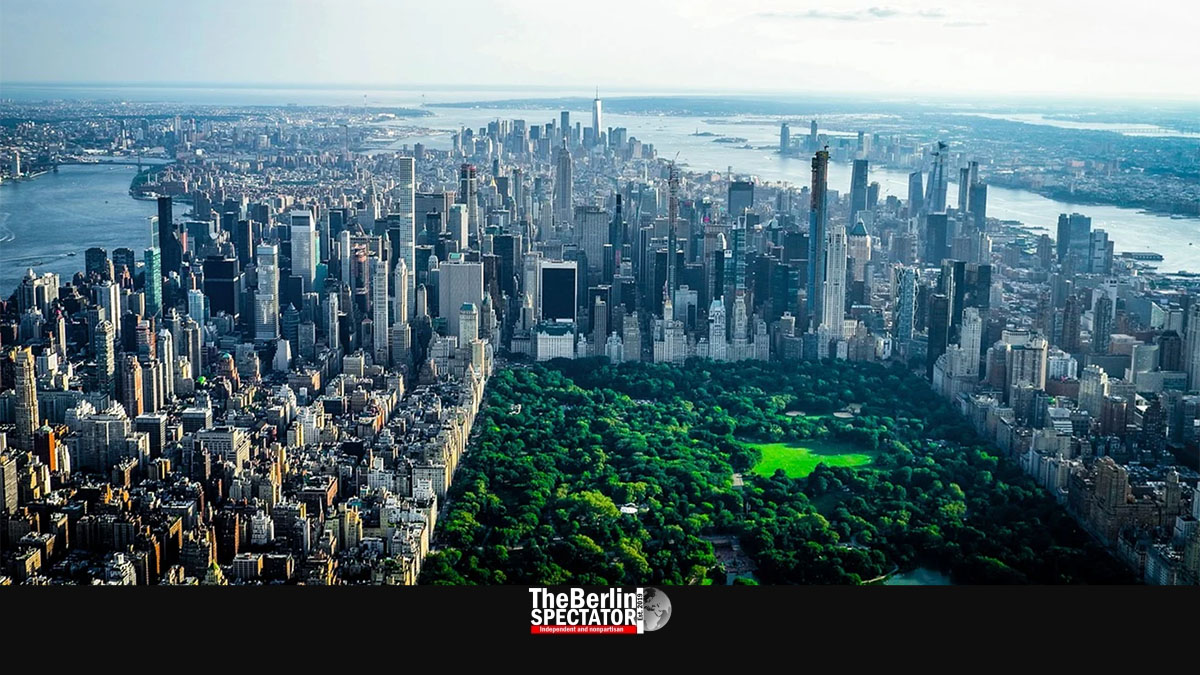 In spring, Berlin will have direct flight connections to the United States of America again. United Airlines intends to resume its route to Newark (New Jersey) and begin flying to Dulles (Virginia) near Washington.

Berlin, October 20th, 2021 (The Berlin Spectator) — Walking across Brooklyn Bridge, having lunch in China Town or staring at Manhattan from the Empire State Building will soon be options again. The same applies to visiting Smithsonian museums, enjoying gigs at ‘Blues Alley’ or shopping on M-Street in Washington D.C.. Are things finally normal again? No. But direct flights to America, from Brandenburg, and vice versa, will be back soon.

Now that the U.S. government is dumping its Corona entry ban for Europeans in November, the aviation industry will be back in business on the North Atlantic Route. According ‘Visit Berlin’, the state-owned company that promotes Berlin as a tourist destination, and the Chamber of Commerce and Industry in the German capital, United Airlines will start flying from Newark (New Jersey), which is around the corner from New York City, to Berlin and back on a daily basis, starting on March 4th, 2022.

It gets better. From May 6th, the same airline intends to revive the direct route between Berlin and Washington D.C., meaning they will fly back and forth between Dulles International Airport in Virginia and BER Airport in Brandenburg. It is unclear at what frequency this will happen. In 1998, there was a direct flight from Berlin’s former Tegel Airport to Dulles for a while. Because of a lack of interest, it was discontinued. The New York route was scrapped in 2020 because of the Corona pandemic. In both cases, United Airlines will use Boeing 767s for those new flights.

For ‘Visit Berlin’, its CEO Burkhard Kieker said the new route to Washington was “great news for the air traffic location and the congress city of Berlin.” He said the ‘Long Distance Initiative Berlin’ had worked on this for a long time. Indeed, this initiative founded by several companies has been demanding direct flights to Washington D.C. for years. Kieker also stated the resumption of those New York flights was “an important step for the restart of the visitor economy in Berlin”. At ‘Visit Berlin’, which insists on spelling itself ‘visitBerlin’, they always throw around a lot of tourism industry lingo in English, even when they supposedly speak German.

Jan Eder, the Business Executive of Berlin’s Chamber of Commerce, who is also a member of the Long Distance Initiative, commented on those flight connections as well. The announced route to Washington showed the potential the capital region had for intercontinental flights. Now it was up to politicians to make sure there would be air transport agreements that would finally make more long distance flight connections to Asian and Arabic destinations possible. This was the moment to add the demands voiced by the Long Distance Initiative to the coalition agreements which were being negotiated for Berlin and on the federal level, Eder said.

Before Corona messed things up, almost half a million visitors per year came to Berlin from the United States of America. In 2019, the exact number was 478,000. From January to August of this year, only some 32,000 Americans came to the German capital. The tourism industry is hoping for a huge increase next year. ‘Visit Berlin’ is about to start promoting Berlin in the U.S. again. The Asian market is another area the company is putting its hopes into. Starting today, the Airline Scoot will be resuming its route between Singapore and Berlin. For now, it will be covered three times per week.

Berlin has never been a major hub for intercontinental flights. Frankfurt Airport, Franz Josef Strauss Airport near Munich and, to some extent, Düsseldorf Airport are far more important in this regard. This has to do with Germany’s recent history and restrictions German airlines were under. During the Cold War, Berlin was off limits for Lufthansa. In West Germany, Frankfurt Airport kept on growing. Relocating this huge hub to Berlin is not an option, for many reasons.