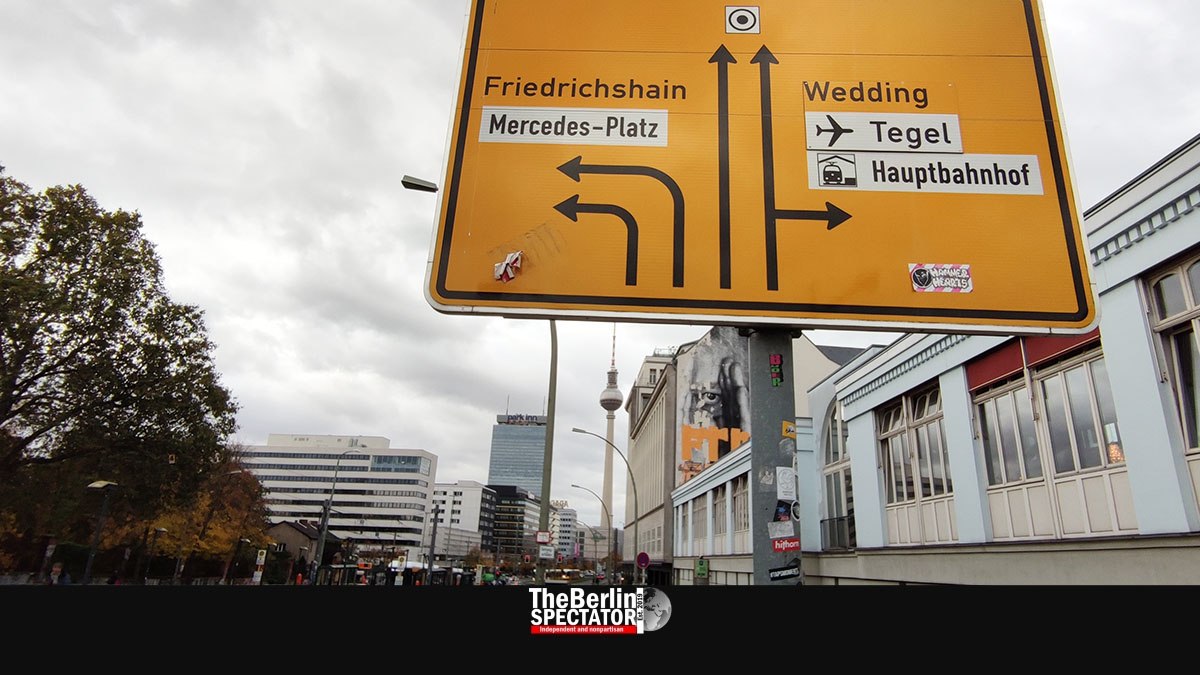 Germany was hit by a storm system on Thursday. In many areas, falling trees caused damage. In North Rhine-Westphalia and other states, Deutsche Bahn temporarily stopped most of its trains. Fire departments were busy clearing streets all over the country.

Berlin, October 21st, 2021. Update: 8:17 p.m. CEDT (The Berlin Spectator) — In Berlin, the fire department declared a ‘Weather-Related State of Emergency’ on Thursday, when a major storm system came in from the west. Fire fighters were busy dealing with countless storm-related problems. At around noon, the police had to close Invalidenstrasse for all traffic because a big flagstaff was about to fall from an office building. Since the Berlin Fire Department was resolving more urgent issues, it took quite a while until the street could be reopened.

At around 8:00 a.m., the number of calls the Berlin Fire Department received increased a lot. The first trees had to be removed from streets in several parts of Berlin. In some cases, it took a few minutes to clear the street, other operations lasted a lot longer. Between 8:00 a.m. and noon, there were 164 weather-related operations, and 339 of them until 4:00 p.m.. The Berlin Police Department was quite busy as well.

Berlin’s main public transport provider BVG said 20 of its 150 bus lines had been affected by fallen tress that had been blocking streets. Overhead ‘U-Bahn’ trains moved more slowly because of the storm. The ‘U2’ line was interrupted temporarily when a tree fell on the tracks. At Johannisthaler Chaussee on the ‘U7’ line, an entrance was closed when part of the roof was damaged. Two tram lines were shut down for a while, when objects were blown into their electric cables. Berlin’s ‘S-Bahn’ trains were slower today as well. Delays had to be expected on all lines.

A few hundred miles further west, in North Rhine-Westphalia, things looked a lot worse. In the morning, Deutsche Bahn shut down the better part of its huge train network there because of the severe weather, including the ICE bullet trains from Cologne to Hamm and vice versa, between Würzburg and Nuremberg, from Cologne to Frankfurt and between Frankfurt and Amsterdam. The connection to Brussels was cancelled too.

Other trains, including the ICE from Bonn and Cologne via Dortmund and Hanover to Berlin was cancelled temporarily. In the afternoon, it was returned into service, but there are long delays all over the place. In Thuringia, Saxony and Saxony-Anhalt hardly any trains were in service in the afternoon. The same applied in Germany’s north-western and south-western parts. Thursday was not a good travel day. Many commuters had issues getting to work or back home.

In several eastern states, including Brandenburg, thousands of residents were without power, after falling trees damaged electricity lines. Crews were trying to fix those issues in difficult conditions. In Dresden, all tram lines were shut down for safety reasons. Hanover and several other cities decided to close their parks today, as a precaution. In Berlin, both zoos are closed today.

The German Meteorological Service advised people in Germany to stay indoors because of the danger posed by this first fall storm of the season. It is supposed to recede tonight. On Friday, temperatures are supposed to plummet down to a daytime maximum of 8 to 11 degrees Centigrade (46 to 52 degrees Fahrenheit).