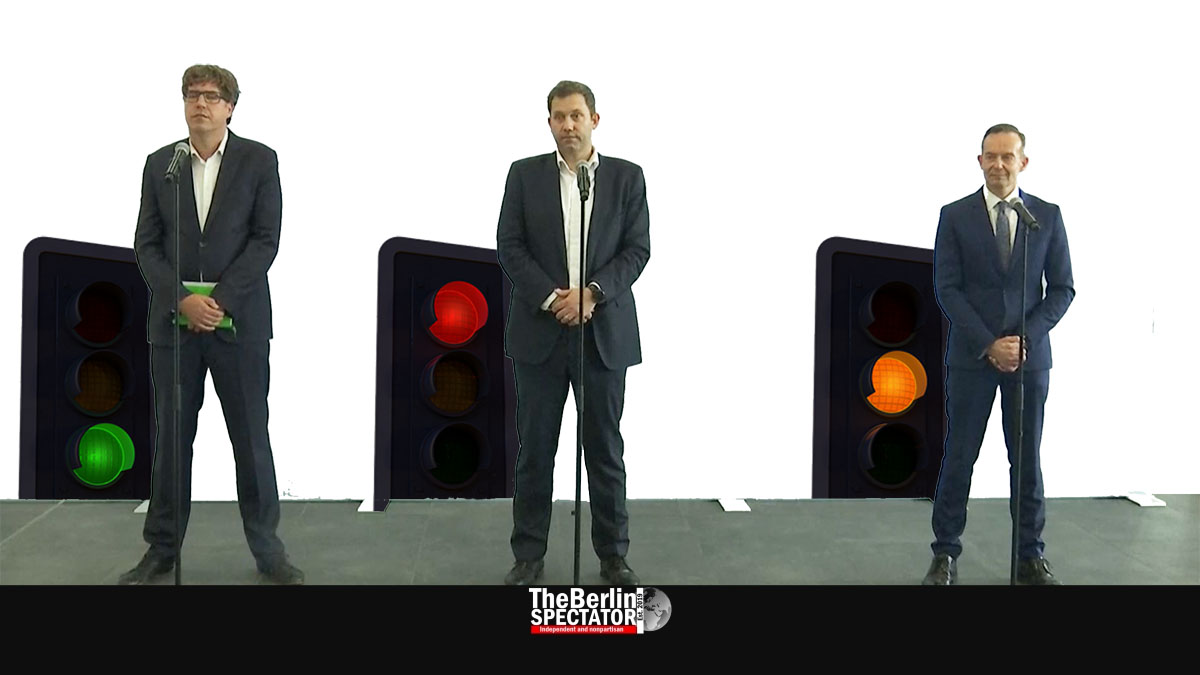 In Berlin, the SPD, the Greens and the FDP started official coalition talks on Thursday. Their goal is to form a ‘traffic light coalition’ and elect a new Chancellor at the Bundestag on or shortly after December 6th.

Berlin, October 21st, 2021 (The Berlin Spectator) — Three and a half weeks after Super Sunday, the phase of preliminary coalition talks is officially over. Real negotiations commenced on Thursday. They were announced by the Secretaries General of the Social Democrats (SPD), the Greens (Bündnis 90/Die Grünen) and the Liberal Democrats (FDP) in Berlin.

The SPD’s Lars Klingbeil stated, 22 workgroups with representatives of the three parties would discuss just as many subjects starting next Wednesday. On November 10th, the results will be forwarded to the main negotiators who will discuss them again and agree on the approach their government will take. The main group is also supposed to make sure remaining conflicts are being resolved at the end of the negotiation process.

For the FDP, Volker Wissing said his party had been encouraged by the preliminary talks it had held with the SPD and the Greens. Hurdles had been taken, which is why the FDP would go into the coalition talks with optimism. The goal was to have a coalition agreement ready by the end of November. Wissing stated the partners intended to elect a Chancellor at the Berlin Bundestag and form a government in the second week of December. He conceded this goal was ambitious. “We want to show our ability to act.”

Michael Kellner of the Greens told the press in Berlin, getting it all done this quickly was “a complex endeavor”. He conceded there would be issues, but said he was sure the negotiations would be successful. For the first time in 16 years, the Greens now had the opportunity to join a federal government. From 1998 to 2005, they had been the junior partner in a ‘red-green coalition’ with the SPD under Chancellor Gerhard Schröder.

Before the SPD’s Olaf Scholz can be elected Chancellor in December, the three parties involved will have to approve the coalition agreement the negotiators come up with, provided the talks are indeed successful. In 2017, the FDP suddenly pulled out of coalition talks with Angela Merkel’s CDU and the Greens. It took months until a new government coalition was formed by the conservatives and the SPD. According to Volker Wissing, Germany needs “a stable government as soon as possible this year”.

Ministries up for Grabs

Apart from many big issues, including Germany’s future fiscal and climate policies, the parties will have to discuss who will get which ministries. The FDP’s chairman Christian Lindner wants the Finance Ministry and the Greens will most likely get the Environment Ministry, but what about the Foreign Ministry, the Labor and Justice Department and all other ministries? Answers to all open questions are supposed to be available within seven weeks.