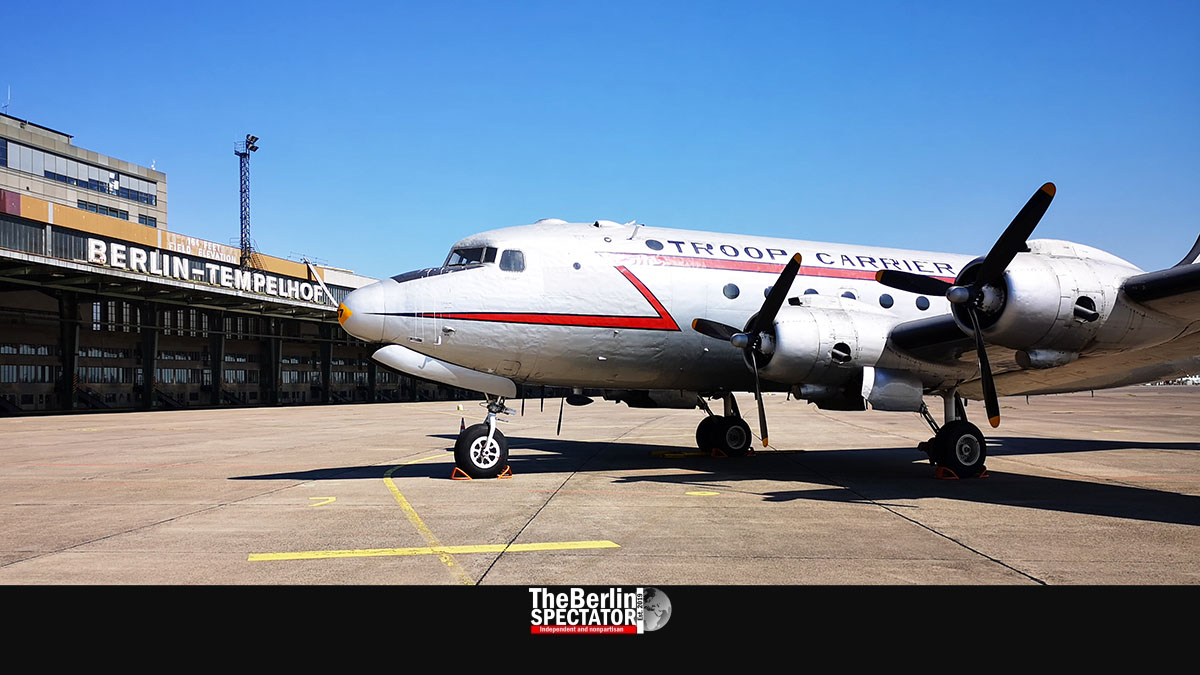 Tempelhof Airport is one of the most interesting spots in Berlin. On its runway, aircraft are banned. Instead, it is being used by dancers, joggers, cyclists, inline skaters, families, party people and doggies for recreational purposes.

Berlin, October 25th, 2021 (The Berlin Spectator) — “Take me to the airport” is a sentence taxi drivers all over the world hear every day. But in some cities, including Berlin, the passenger will need to provide more specific information, since there are four airports. One of them, Berlin Brandenburg Airport (BER), was opened a year ago, almost to the day. It replaced all other major airports in the region.

The next one, Tegel, was closed when BER opened. Also there used to be Schönefeld, which was the most important airport in the communist GDR and the main hub for Interflug, Eastern Germany’s airline. In 2020, it became Terminal 5 of BER Airport, which is located around the corner. Because Corona hit the airline industry badly, the passenger numbers shrunk substantially. That is why Terminal 5 was closed.

Baseball on the Airfield

And there is the fourth Berlin airport, called Tempelhof. This one is unconventional. Yes, there are flying objects here, but those are kites. The runway is overcrowded when the weather is nice, even during the Corona crisis. But instead of aircraft, cyclists and parents with strollers are using it. They would probably take off if they had wings and a little more thrust.

Tempelhof does have a rather big terminal, a tower and a runway. But the only two planes found on its premises are old and not airworthy. They are just here to convince people they are actually at an airport. These historic aircraft played a vital role in the Berlin Airlift the 70th anniversary of which was celebrated here in 2019.

Instead of Airbus and Boeing aircraft, flight controllers, baggage handlers and airfield tankers, tennis courts are located here, a baseball field and beach volleyball facilities. There is so much room at Tempelhof Airport, the city of Berlin even set up a migrant camp here during the refugee crisis of 2015.

Two years ago, some 300 asylum seekers lived in small portable homes spread over a large area. This might be the nicest refugee camp ever. Children’s bicycles were parked in front of these containers with doors and windows. The inhabitants lived right there, at the airport.

On weekends, sausage, pretzel and beverage stands appear, for the many couples, families and groups of friends who spent their time taking walks, playing ping-pong, showing off their kites or dancing to Latino music and monotonous . Techno sounds. People use inline skates, skateboards, Segways and anything with wheels. Dogs run around on the taxiways, the runway and the grass. On top of it all, sheep are being accommodated at Tempelhof Airport.

What looks like a rather weird airport today has an interesting and partially tragic history. Orville and Wilbur Wright came to Tempelhof in 1909. The brothers who flew the first steered and motorized aircraft organized an airshow here which lasted several days.

In 1922, Berlin built what the municipality called a ‘Central Airport’ in Tempelhof. It consisted of two wooden huts and a runway with a grass surface. Only two years later, the airport needed to be expanded.

The Nazis wanted to turn Tempelhof into a modern airport in 1934. They commissioned Ernst Sagbiel, a prominent architect. Construction started in 1936, but it was never completed. During World War II, forced laborers assembled bomber planes on the premises. They were freed by the Red Army in 1945. At this point, the Allies took over.

In June of 1948, the Soviets started their Berlin Blockade, which would take almost 11 months. Since no food could reach West Berlin, the Americans quickly organized the biggest airlift ever, known as the Berlin Airlift, in order to make sure the inhabitants would not starve. The French, the British and other nations helped.

Dozens of planes delivered food from West Germany every day, when the Federal Republic had not yet been founded. All of them landed in Tempelhof. The Berliners who were saved this way called those planes ‘raisin bombers’. In May of 1949, the blockade and the Berlin Airlift ended.

One ‘raisin bomber’, an old aircraft on which it says “Troop Transporter”, is parked right in front of the giant terminal building today. It has been used for movies, including ‘Bridge of Spies’ with Tom Hanks. The Berlin Airlift was commemorated on May 12th, 2019, right here.

Today, Tempelhof is a multi-purpose spot with a lot of history. The terminal has several layers of basements. At times, guides take groups for spooky sightseeing tours down there. Nobody seems to have explored the huge basements in their entirety.

Note: An earlier version of this feature was published in 2019, right after The Berlin Spectator was founded.