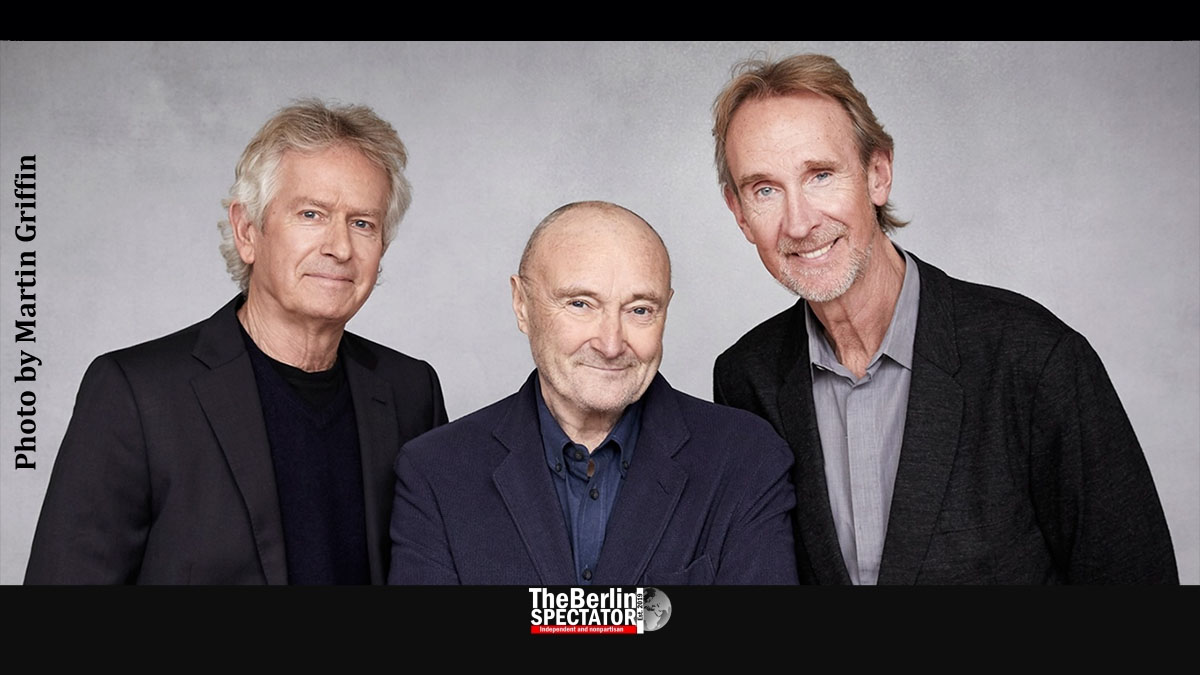 There are events that should be called sensational. This is one of them. Genesis are getting ready for ‘The Last Domino?’, a final tour which will take them to 23 cities. In many of them, they will perform twice. Guess where the tour starts.

Berlin, October 26th, 2021 (The Berlin Spectator) — There are not too many famous bands that reinvented themselves completely at least three times. The same applies to groups that managed to sell more than 100 million albums and produced two solo superstars one of whom sold more than 100 million albums as well. It all started in 1967, when four students at Charterhouse School in Surrey (United Kingdom) founded a band. Their names were Tony Banks, Mike Rutherford, Peter Gabriel and Anthony Phillips.

When they recorded their first album ‘From Genesis to Revelation’ in 1968, nobody suspected the project would be one of the most successful ones of its kind or that it would last 54 years. It all started with 1960s Rock which sounded somewhat dreamy. Then, the development progressed towards Progressive Rock. Genesis told fantasy stories in many of their songs. Other lyrics included social criticism. In all cases, they accompanied those lyrics with fancy and unique arrangements dominated by Bank’s keyboard sounds and Rutherford’s trademark guitar playing style.

At some point, the personnel changed. Anthony Phillips, another guitarist and backing vocalist, left early on. In 1975, after the double album ‘The Lamb Lies Down on Broadway’ was released, Peter Gabriel quit after arguments with the other members. When he was gone, two major problems arose. He had been the main lyrics writer and the lead singer. But Genesis did not have to go far to find his replacement, since the band’s drummer, Phil Collins, sounded great as a vocalist too.

Their 1970s albums, such as ‘Nursery Cryme’ or ‘Selling England by the Pound’, were stunning. A big fanbase purchased them and attended their gigs. But the group’s biggest success would have to wait until they threw their overly intellectual approach overboard. In 1978, Genesis finally scored a big hit entitled ‘Follow You, Follow Me’, which was part of the ‘And Then there Were Three’ album. Two years later, in 1980, they included more Pop elements in their music and attracted more people by doing so. The ‘Duke’ album became their biggest success when it hit the top of the U.K. charts.

Then, for the rest of the decade, Genesis co-defined the way 1980s Pop and Rock music sounded. By the time they recorded ‘Abacab’ in 1981, they were superstars all over the Western world. It was the year when the man with the microphone, Phil Collins, recorded ‘Face Value’, his debut album which became incredibly successful too. Still, he would stay with Genesis whenever they were active, with the exception of four years, from 1996 to 2000. And he is still with them today. Even though he joined Genesis three years after the band’s foundation, in 1970, he does qualify as an original member, at least from today’s perspective.

Obviously, the decades raced by. Now, there are three old ‘blokes’, accompanied by a bunch of younger musicians. Tony Banks and Mike Rutherford are 71, Phil Collins is 70. But they still sound young. And they are still Genesis. Their project is alive and kicking. Sound the alarm, because here comes the best part: They will be touring Europe, the United States of America and Canada. ‘The Last Domino?’, including the question mark, is the title of the tour which commences on March 7th, 2022. Guess where it begins.

Ready for the answer?`Here we go: Berlin is the first city Genesis will rock first in what could be their final tour. In many cities, including the German capital, they will do two gigs on two consecutive evenings because they have many fans to mesmerize. Hanover and Cologne are next. Then, they will perform in Paris, Amsterdam and on their home turf, in London. This is where they are scheduled to do as many as three gigs in a row, at the ‘O2 Arena’.

From the D.C. to Montréal

After a deserved seven-month break, Genesis will be traveling to North America in November of 2022 in order to play at 16 locations including New York City, Washington D.C., Chicago, Montréal and Toronto. What a tour!

Genesis’ detailed tour plan can be checked out on their website. Tickets for the six gigs at three locations in Germany can be purchased here from October 27th, 2021.

By the way: Steve Hackett, an early Genesis member who left the band some 200 years ago, will be touring Germany as well. In March, he is scheduled to present his ‘Genesis Revisited Tour’.