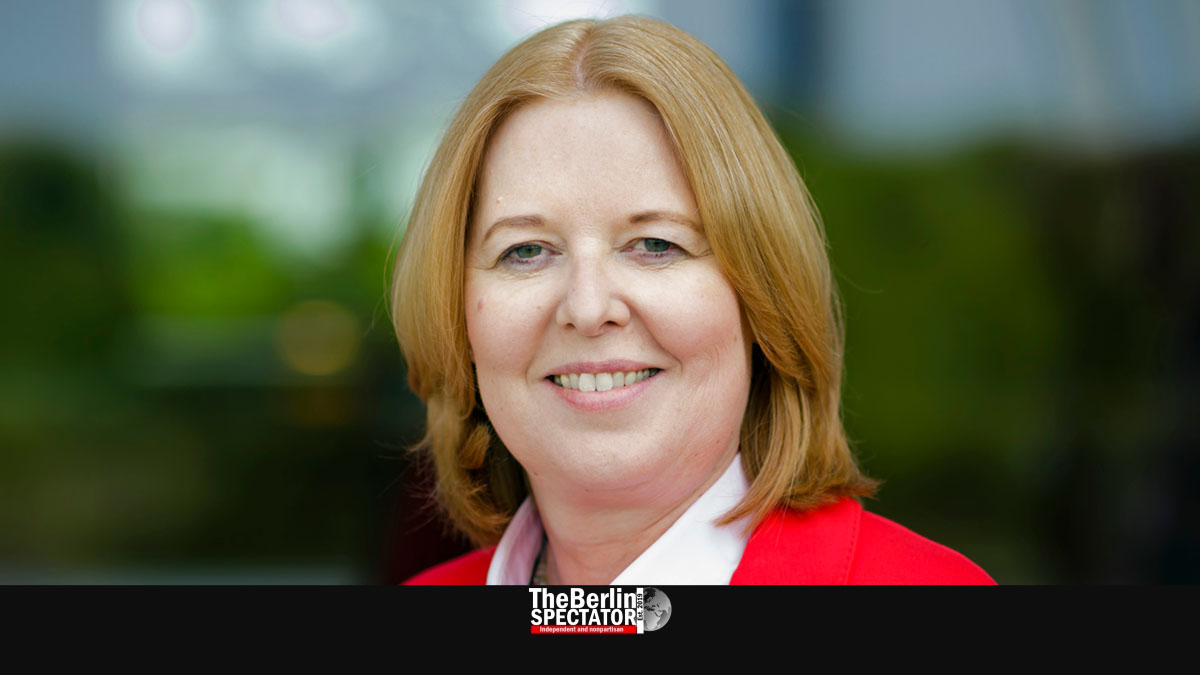 The Social Democrat Bärbel Bas from Duisburg now holds the second-highest position in the Federal Republic of Germany. She is only the third woman to become President of the Bundestag.

Berlin, October 26th, 2021. Update: 6:06 p.m. CEDT (The Berlin Spectator) — At the constitutive session of the new Bundestag, 576 MPs voted for Bärbel Bas as the German parliament’s President, 90 voted against her and 58 abstained. The strongest fraction in the house gets to put in position the President. For the first time in 16 years, it is the SPD. No matter what party the President is part of, he or she is supposed to be neutral.

Representing the Bundestag at all kinds of official events is one of the most important tasks the President has. Another one is to chair the parliament’s sessions. On top of it all, Bärbel Bas will head the Bundestag’s administration. She is 53 years old, part of the SPD’s left wing and has been an MP since 2009. Health care policy was her specialty, until today. It can take new Presidents a while to get accustomed to their new tasks. Her work is not about party policies anymore, but about serving the country and its democracy directly.

In her inaugural speech, Bas stated she had “said yes at the right moment”. The fact that she is only the third woman on the job was “not glorious”, but her election was an honor. She promised she would be “a President for all MPs” and thanked her predecessor Wolfgang Schäuble who had “rendered outstanding services to parliamentary democracy”. She also honored Thomas Opperman, the Bundestag’s Vice President who suddenly died a year ago.

Bärbel Bas also had a demand for all members. They needed to make sure their interaction was respectful. It was their duty to represent the Bundestag in a dignified fashion. Many MPs are already used to their roles, but some are not, since 279 of them are new. This 20th Bundestag has 736 members, which is a record number caused by overhang seats. Many MPs intend to reform the electoral law in order to downsize the German parliament.

As Vice Presidents, five individuals of different parties were elected. They are Aydan Özoğuz (SPD), Yvonne Magwas (CDU), Wolfgang Kubicki (FDP), Claudia Roth (Greens) and Petra Pau (‘Die Linke’). The extremist far-right AfD’s candidate did not get the votes he would have needed.

In the second week of December, the Bundestag is supposed to elect the Social Democrat Olaf Scholz Chancellor. But before this happens, the coalition talks will have to be completed successfully. Scholz’ center-left SPD, the left-wing, environmentalist Greens and the center-right FDP intend to form a three-way government coalition in a constellation Germany has not had before on the federal level.

Until there is a new government, Angela Merkel’s government will continue, but without changing any major policies. This is more of an administrative task than anything else. Mrs. Merkel and her Ministers received their certificates of discharge from President Frank-Walter Steinmeier today. He thanked Mrs. Merkel for 16 years of service as Chancellor. The most powerful person in Germany, the President, is scheduled to be elected in February. Steinmeier, another Social Democrat, wants to continue. Whether he will remains to be seen.