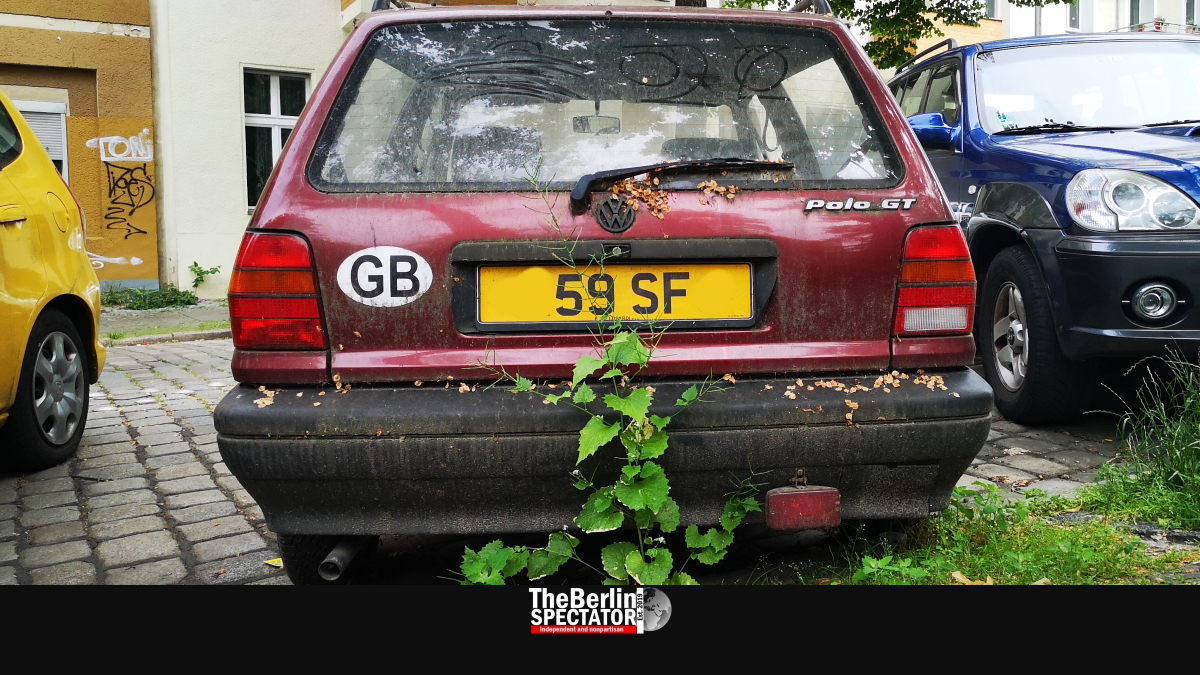 Berlin has many challenges to deal with all the time. One of them is the fact that more and more junk cars are being left to rot all over the city. In many cases, it takes years until the authorities have them removed.

Berlin, October 26th, 2021 (The Berlin Spectator) — In 2017, someone parked a dark red Volkswagen Polo in Wissmannstrasse, a street in Berlin’s Neukölln district that was recently renamed Lucy-Lameck-Strasse. The vehicle had British number plates, but its steering wheel was on the right side (meaning on the left) anyway. Whoever parked this vehicle might have moved to Berlin. Who knows? But the car was never picked up again.

Dirt was accumulating on and around the Polo, and plants were beginning to wrap it, when an officer employed by Berlin’s Office of Public Order left a ticket on the car in 2019. It said the owner needed to remove it ASAP. Otherwise the city would do it and charge him or her. But nothing happened. In 2020, the VW became more dusty and rusty, but it did not move an inch. Then, in early 2021, the scrap heap on four wheels was towed away.

Why would anyone just leave a vehicle on the street? Was it broken? Did they want to save the money for the junkyard? Did they forget where they had parked the car? Is the owner in jail or did he/she die? Nobody knowns. According to the Berlin Senate, just leaving scrap cars on the street is both illegal and dangerous. The issue is that more and more of them are rotting on the streets of the German capital.

The Berlin Senate released the exact numbers in an answer to an official inquiry on the matter by Daniel Buchholz, a Social-Democratic member of the Berlin House of Representatives. In 2017, some 1,100 junk cars were counted in the city. In 2020, there were 1,637. Those rusty vehicles cause several problems: They do not look good, they occupy needed parking spots, they become hazards to the environment and they can cause injuries, for instance when their windows are broken and children play in them.

Just leaving scrap cars on the street is an offense. Unregistered vehicles are not allowed to park anywhere in public space. In 2018, 824 legal proceedings against owners were initiated. In more than 250 cases, those led to court verdicts. In 2019 and 2020, the number of proceedings decreased, while that of junk cars in Berlin rose. Welcome to Berlin.

Residents who notice scrap cars on the street can inform the Office of Public Order online (website in German only). They usually place a ticket on the vehicle and do some research. If the owner does not react to the warning, they will have the car removed. With every scrap heap they get rid of, the streets of Berlin look a bit nicer. But, of course, there are more problems of this kind. In some parts of Berlin, trash is piling up on the streets, including old mattresses and construction rubble. The Senate just started complaining about junk boats on the Spree river and Berlin’s canals.