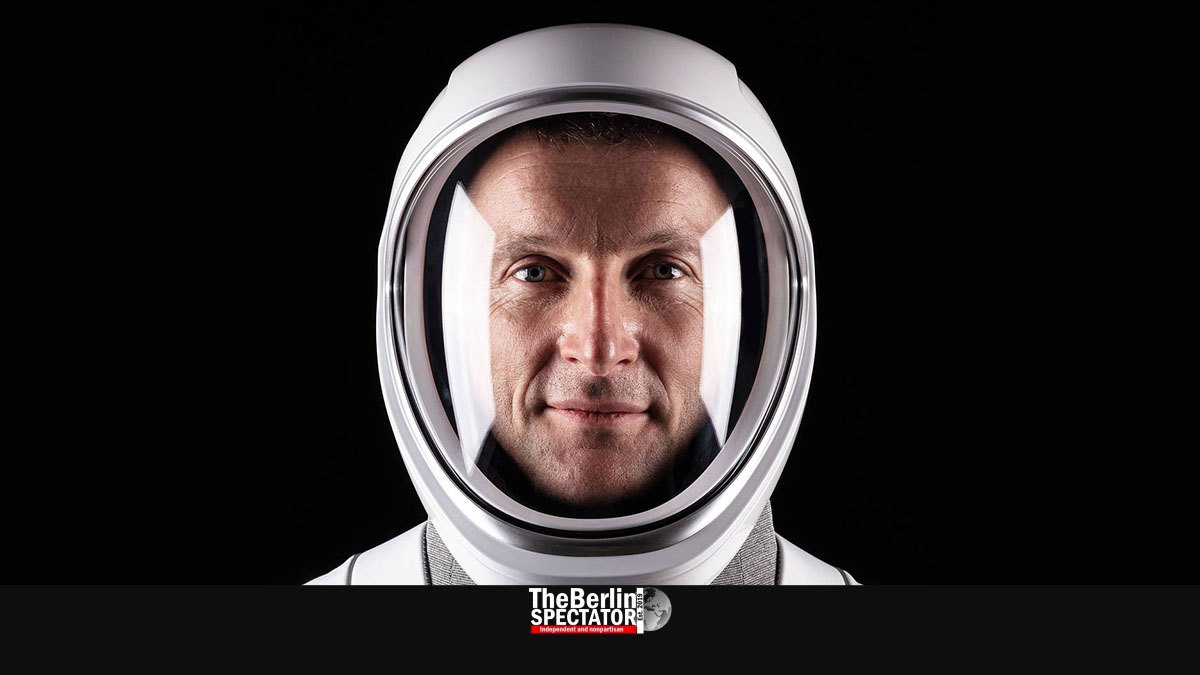 Germans usually take trips to Hamburg, Munich, the Black Forest or, if they are lucky, to Tokyo, Seattle or Rio de Janeiro. Matthias Maurer picked an even more interesting destination. On Wednesday, he will be part of a NASA flight to the ISS.

Berlin, November 1st, 2021 (The Berlin Spectator) — Not that many Germans have experienced space flights. In August of 1978, Sigmund Jähn, a GDR citizen, became the first who did. With Soviet colleagues, he spent a week on the former space station Saljut 6. Ulf Merbold was the first West German individual who got to visit the final frontier. The astronaut, who turned 80 in June, is a German super hero, also because he flew to space three times, twice with NASA and once with the Russians, in the 1980s and 1990s.

There is Reinhard Furrer, who died in a plane crash in 1995, and there are Ernst Messerschmid, Klaus-Dietrich Flade, Hans Schlegel, Ulrich Walter, Thomas Reiter, Reinhold Ewald, Gerhard Thiele and Alexander Gerst. Yes, all of these astronauts and cosmonauts are male. Not a single German woman has been to space. It might happen around the year 4000.

Germany’s new hero is Matthias Maurer. The European Space Agency (ESA) sent him to Cape Canaveral in Florida, from where he was supposed to blast off into space yesterday with a bunch of NASA colleagues, namely Kayla Barron, Raja Chari and Thomas Marshburn. Then, a problem arose. NASA stopped the countdown for the mission ‘SpaceX Crew-3’ and postponed the launch of the Falcon 9 rocket and Dragon spacecraft that will bring them to the International Space station (ISS). Both the Falcon and the Dragon are SpaceX products, the Teslas of space, so to speak, except they do use fuel. Lots of it.

According to NASA, the problem was “a large storm system meandering across the Ohio Valley and through the northeastern United States”. Of course, Kennedy Space Center is nowhere near Ohio, but the crew’s flight path is. There is hope: NASA’s new launch date is Wednesday, November 3rd, 2021, at 6:10 a.m. CET (1:10 a.m. U.S. Eastern Time). This time, the Americans intend to nail the launch, since the weather looks favorable.

Matthias Maurer, who is a mission specialist, did not seem to be too upset about the delay. “In spaceflight you need to be prepared for every situation”, he wrote on Twitter. He has waited for his turn to go to space for six years, since ESA added him to its Astronaut Corps. Three days more do not really seem to make a big difference.

Maurer and his colleagues probably packed big bags because this is far more than a day trip. The four space travelers are supposed to stay at their destination until March of 2022. The ISS, located 400 kilometers (249 miles) above Earth, will be their home. They will not really have the time to watch Netflix movies a lot, since they are supposed to conduct many experiments. At least once, Matthias Maurer will be part of a space walk.

Out there, they will replace the ‘Crew-2’ which consists of Shane Kimbrough and Megan McArthur from NASA, Akihiko Hoshide from the Japan Aerospace Exploration Agency and ESA’s Thomas Pesquet. It is unlikely the two non-American astronauts will be dropped off in Paris and Tokyo on the way back from space. They will have to take conventional flights from Miami, after their splashdown off the Florida coast.

One thing is certain: Matthias Maurer thought of everything. He will even take music to the ISS. His space playlist includes songs by Dire Straits, David Bowie, Bruno Mars, The Beatles, Led Zeppelin, The Electric Light Orchestra and Queen. Fortunately, he will take along some Jazz too. It is Dave Brubeck’s ‘Take Five’.

In Oberthal, a municipality in Maurer’s home state Saarland, thousands of people took part in an event which was supposed to celebrate the liftoff of his mission on Sunday. A video message of his was shown there. He said his homeland, the Saarland, was always with him.

‘Cosmic Kiss’ is the mission name picked by ESA. It obviously is a declaration of love for space. NASA does not use this mission name though. To them, this is not ‘Cosmic Kiss’, but rather ‘SpaceX Crew-3’. Bon voyage.