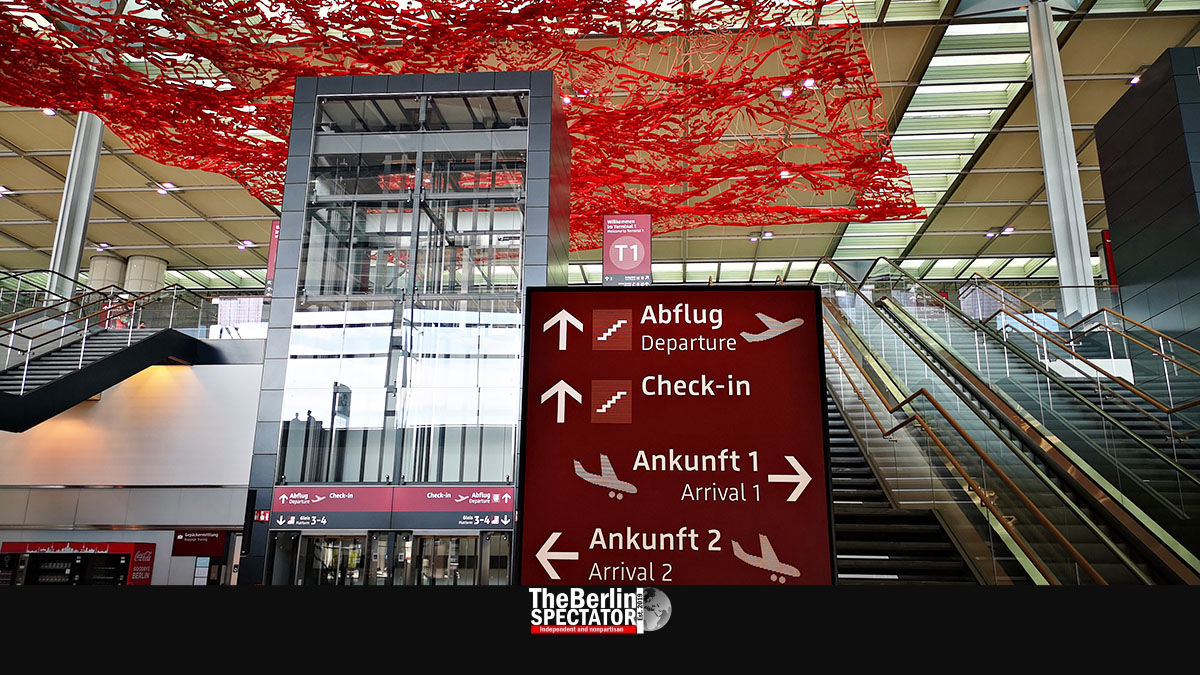 At BER Airport, nothing ever seems to be working properly. The latest problem: Bacteria were found in the drinking water. They can cause diarrhea and vomiting.

Berlin, November 3rd, 2021 (The Berlin Spectator) — Some years ago, a genius idea was developed. Berlin and Brandenburg decided to build a big new airport in Schönefeld, one that would replace the old airport which was already there, and Tegel, another one located in Berlin’s northwestern part. So, the constriction began. Initially, BER, the new airport for the German capital, was supposed to be completed in 2011.

Nine years and billions of Euro later, it finally happened. On October 31st, 2020, Germany’s Transport Minister Andreas Scheuer, Berlin’s Governing Mayor Michael Müller and Brandenburg’s First Minister Dietmar Woidke opened the eighth wonder of the world. Back then, Woidke did not know he was infected with the Coronavirus, but he did not pass it on to anyone. At this moment, the main problem was a different one: Because of the Corona pandemic, nobody flew. A big new airport was the last thing the region needed.

But the plans were implemented, with a nine-year delay. Tegel Airport was closed the minute the last aircraft took off from there. It was an Air France Airbus A320 to Paris. Schönefeld Airport, the former pride of the communist GDR, became Terminal 5 of BER Airport. Only one runway needed to be built for the new one, because one was already there. So was part of the tarmac. By now, Terminal 5 has been closed because the passenger numbers are still low most of the time.

Now that BER was finally in service, everything would be perfect. This is what everyone thought in Berlin and Brandenburg, until new problems popped up. People had issues finding their gates. They still do because some of them are not signposted well. In winter of 2020, passengers and employees noticed a bad draft in Terminal 1. This was another problem which had to be dealt with.

Then, about a month ago, in early October of 2021, the number of flight passengers was increasing because the Corona situation seemed to be improving. Berliners and Brandenburgers went to BER Airport to board their flights to fall holiday destinations. Even though the airlines and the airport should have known how many passengers would take off, BER was overburdened. Dealing with many passengers actually was the one thing the airport was built for in the first place, but it was not prepared.

Flights were delayed, many passengers missed theirs because the waiting lines at the check-in counters and the security checkpoints were far too long. Travelers reported they had waited for up to four hours. Before all of those passengers returned after the fall vacations, BER Airport’s new management came up with an intelligent idea: They increased the number of employees on duty. So, this issue did not reappear.

Now, it is bacteria. During routine tests, they were found in the drinking water in BER’s lavatories. Terminal 1 is affected, but so are the police building next door and the government terminal. The bacteria are not dangerous, but they can cause diarrhea and vomiting. And the last thing anyone needs is a pilot or a flight attendant who has to go to the bathroom every two minutes, not to mention hundreds of passengers.

According to FBB, the state-owned company that runs BER Airport, the water pipes will now be rinsed. It is a process which takes several days. Passengers who show up at the airport are being informed about the issue in audio announcements and on leaflets. In the meantime, people in Berlin and Brandenburg are asking themselves one question: What’s next?