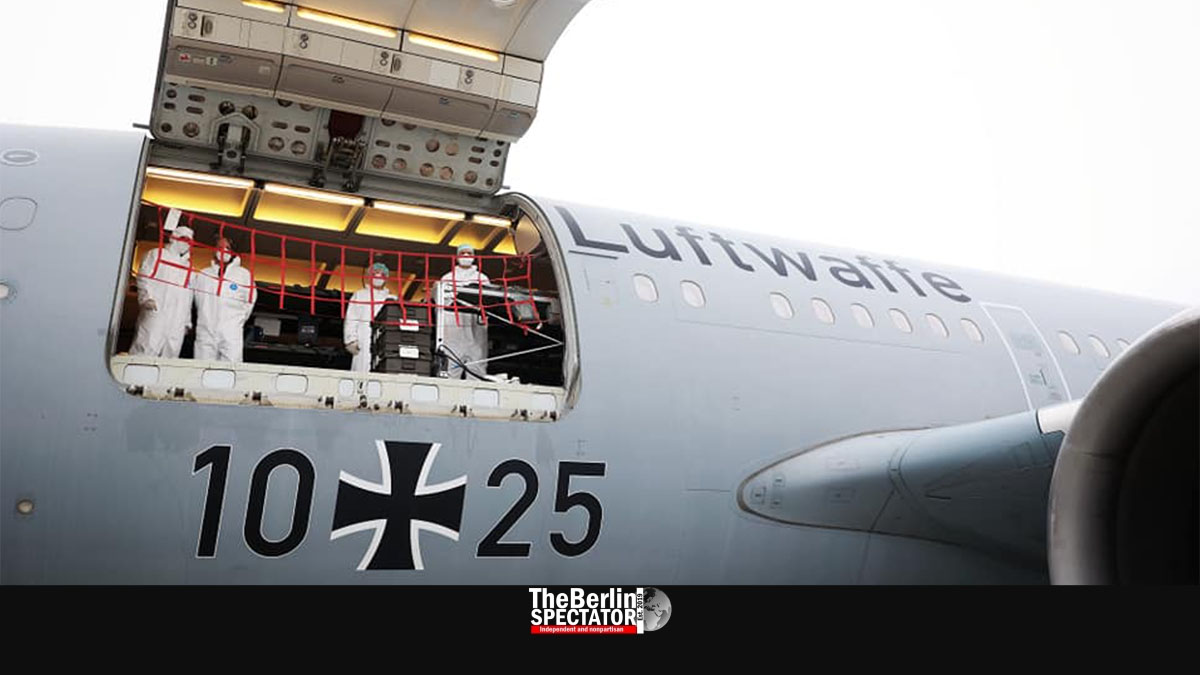 Romanian COVID-19 patients are now being treated in intensive care units at German hospitals. So far, twelve patients were picked up by the German Air Force. Six more are supposed to follow today.

Berlin, November 3rd, 2021 (The Berlin Spectator) — In Romania, the Corona situation is unbearable. Only 37 percent of all citizens are vaccinated against COVID-19, meaning the vaccination rate is half the European Union average. This is one of the reasons why the Corona infection numbers in Romania are exploding. The country’s health system cannot cope with the situation anymore.

In the past days, doctors from clinics run by the Bundeswehr, Germany’s armed forces, visited Romanian hospitals. They looked at about 400 Corona patients who are in serious condition and identified some who were stable enough to be transported. On Monday, six Romanian patients were flown to Germany. On Tuesday, another six followed. Today, a medivac Airbus A300 owned by the Luftwaffe, which basically is a flying clinic, will be transporting more Corona patients to Germany for treatment.

Germany’s armed forces are cooperating with the Romanian ‘Departamentul pentru Situaţii de Urgenţă’, the Department of Emergency Situations, via the German Embassy in Bucharest. The patients need to be cared for at all times, including before, during and after their flights to Germany. So far, one of those flights landed at Cologne/Bonn Airport. From there, patients on respirators were taken to clinics in North Rhine-Westphalia and to the Bundeswehr Hospital in Koblenz, a city in neighboring Rhineland-Palatinate.

On Tuesday, the Luftwaffe flew six Romanian Corona patients to Hamburg. Some of them were supposed to be treated right there, others were driven to Lübeck and Kiel in Schleswig-Holstein province in high-tech ambulances equipped for ICU patients. The purpose of helping Romania this way is to take some of the pressure off the health system in a country in which the intensive care units are overcrowded.

According to critics in Bucharest, the population there has not been informed about the dangers of Corona properly. In Romania, 591 Corona patients died on Monday and Tuesday, within 24 hours. Exactly 541 of them were unvaccinated, the authorities in Bucharest say. Romania has some 19 million inhabitants. In Bulgaria, a neighboring country of 7 million people, the situation is even worse. Only one in four Bulgarians has been vaccinated. More than three hundred Corona patients died there within one day.

Since the Corona pandemic started, Germany has accepted and treated COVID-19 patients from Italy, France, the Netherlands and other countries. German doctors helped their colleagues at Portuguese hospitals in February. While Romanian patients are being flown in right now, Germany is also sending medication for COVID-19 patients to Bucharest.