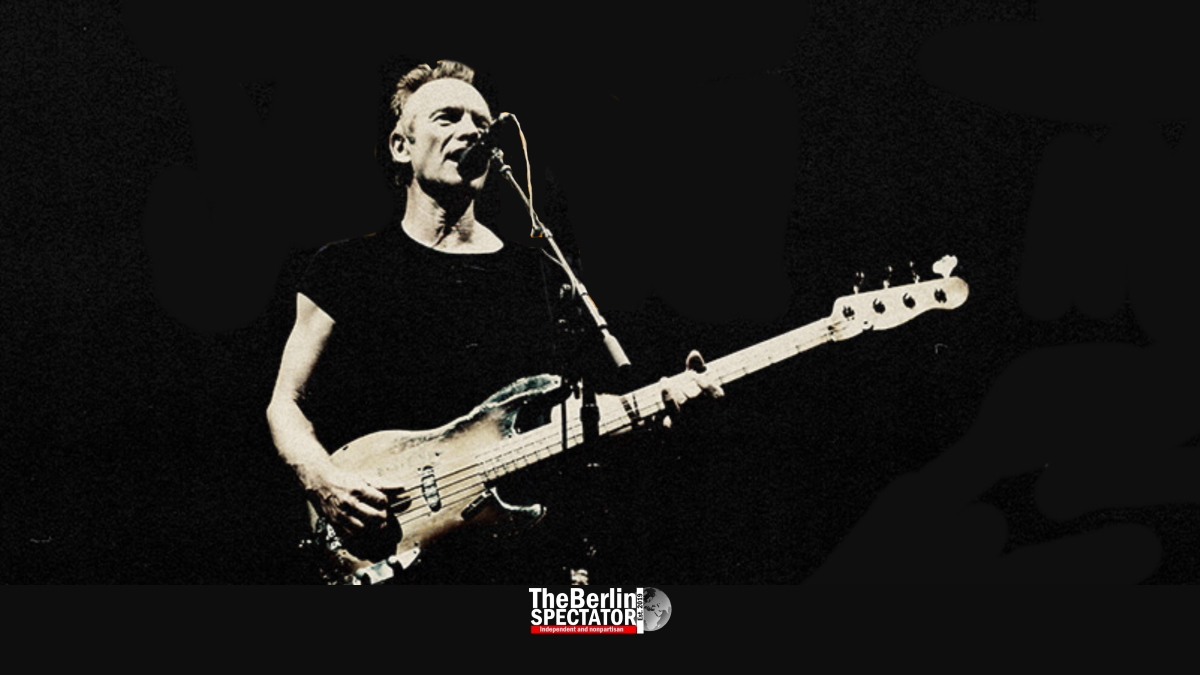 The superstar of all superstars, Sting, was going to tour like crazy. Then, Corona messed it all up. Now, there are new concert dates. Since he wants to be on the safe side, Sting will be hitting German stages in 2022.

Berlin, July 3rd, 2021. Update: November 3rd, 2021 (The Berlin Spectator) — The metamorphosis of Mr. Gordon Sumner, who dumped his conventional name long ago and replaced it with Sting, is just as fascinating as his work. People can like or dislike his music, but nobody can deny that most sounds he has delivered are part of the high quality rubric in Rock, Pop and Folk.

The only problem Sting’s hits have, no matter whether it is ‘Roxanne’ or ‘Englishman in New York’, is that they have been played on the world’s many radio stations far too much. Of course 99.9 percent of all Pop and Rock musicians in the world would kill if only they could have this problem instead of their own.

‘Inner Secrets’, the Santana album released that same year, contained more fancy compositions and stunning performances, while what The Police came up with was partially on the dark side, meaning some tunes were even Punk-influenced, such as ‘Truth Hits Everybody’. And ‘Roxanne’ was louder than Santana’s ‘Stormy’, in several ways.

The Police consisted of three new guys on the block who attracted young girls, and probably boys, with both their sounds and their sex appeal. Whatever the interpretation of The Police’s first album might be: It was very successful. It literally exploded. Almost everyone in the world will identify ‘Roxanne’, while only die-hard Santana fans would remember ‘Stormy’.

In articles about genius musicians like Sting, it usually says “he grew up in a musical family”. Well, he did not. His mother was a hairdresser and his father an engineer and milk man. The Northern Counties College of Education in Northumberland was not exactly Julliard. Sting was a bus driver and teacher. Music became a priority when he attended Cream and Manfred Mann gigs. He started singing with Jazz acts at night, since his unique voice and stage presence always stuck out.

In 1983, the year The Police released ‘Synchronicity’, Sting was on stage the moment he decided to leave the band in order to become a solo artist. By then, the group had already dumped their more aggressive Punk sounds. They fit the Pop music world even better than six years earlier. But Sting became the singer/songwriter he had to become, as a solo artist. The man in the center of it all, Sting formerly known as Gordon Sumner, became one of the three biggest superstars of the 1980s.

Let’s hit the fast forward button or this article will never end: Sting has recorded a dozen studio albums so far. As an actor, he played in quite a few movies and TV shows. As a chess player, he lost against Garry Kasparov. In short: There is nothing the superstar cannot do, except for winning against the Russian chess master.

There are three words this brilliant article just needs to contain. They are ‘Eighteen’, ‘Grammy’ and ‘Awards’, in this order. Of course he was nominated for many more and drowned in a million other awards, including an American Music Award, Brit Awards and, as you can imagine, a whole lot of other prizes. How many Ikea shelves does Sting need to display all of them? We might never know.

Las Vegas is where Sting is performing as we speak. In June of 2022, he will go back there. No, he is not going back to hit the Craps tables. Well, let’s hope so. But first, he will “do” Europe.

Now we are finally getting to the best part of this article: Why did we even publish it? Because he is coming. No, not Godot, but Sting. To Germany and other European countries. Hallelujah. The German leg of his tour is scheduled to be kicked off in Mannheim on March 26th, 2022. Leipzig and Hamburg will be covered on March 28th and 30th, respectively. In April, Oberhausen and Cologne are on the agenda. On June 25th, 2022 the man will be back in Hamburg. This time, it is an open air gig. Then, he is scheduled appear on a stage in Neu Ulm.

An Englishman in Zurich

Bonn, Eisenstadt (Austria), Munich, Tüssling, Würzburg, Mainz, Erfurt and Halle will all be squeezed into the month of July of 2022. On July 28th, 2022, a city nobody has ever heard of will be serviced. It is called Berlin.

Whoever thinks this is it should think again. Sting would not be Sting if he did not perform in Luxembourg, France and Italy too. No, Nancy is not the name of some groupie, but a city in France he will be gigging in. How about London? This is where he will raise the roof at the Palladium six times in a row. Sweden, Denmark and the Netherlands will get their share of Sting as well. We almost forgot Czechia, Poland and Spain. The last European tour gig is supposed to take place in Zurich/Switzerland on October 10th, 2022.

By the way: Tickets for most German Sting concerts are available here. His own website with tour information can be accessed here.