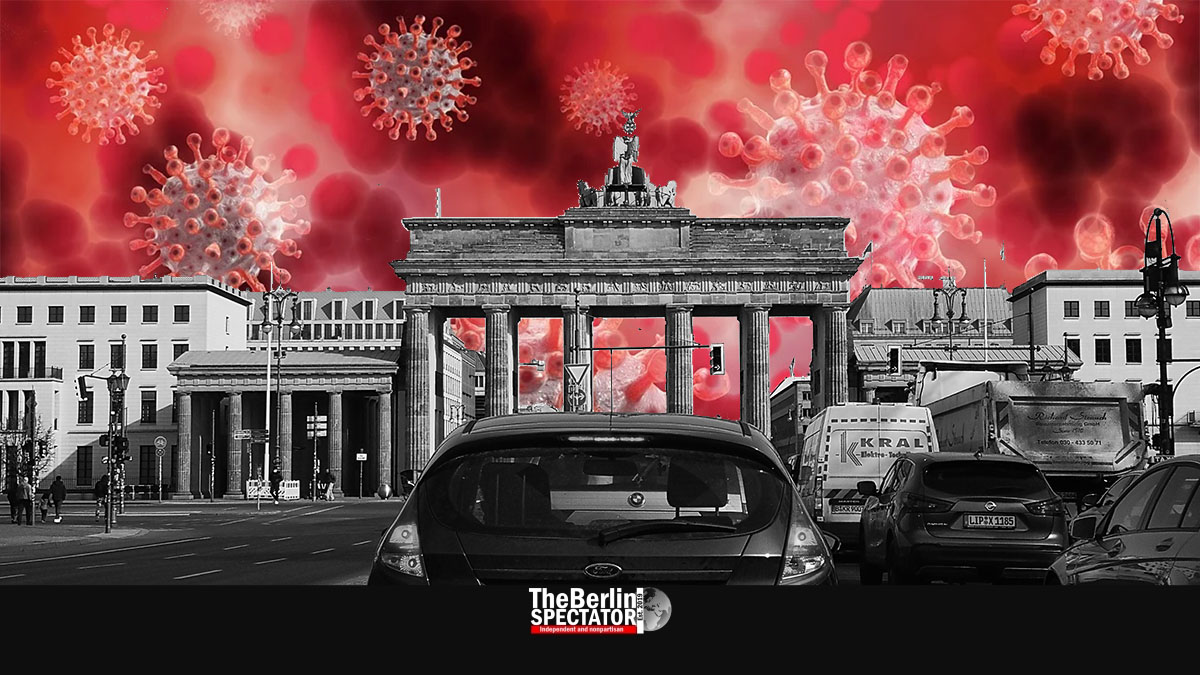 Berlin is a dangerous place. The Corona infection numbers are skyrocketing in spite of the vaccination campaign. On the national level, the second-highest number of new infections the country ever had was just reported.

Berlin, November 6th, 2021 (The Berlin Spectator) — In Germany, last winter was supposed to be the first and last cold season with high Corona infection numbers. Tt was the first but, contrary to the expectations and hopes, not the last one. If Germany was a different country from the perspective of Germany itself, it would have to become a ‘High Risk Area’. Considering the infection numbers, a visit to the supermarket or a day at the office should require a 10-day quarantine afterwards. In other words: The situation is alarming.

According to the Robert Koch Institute, Berlin’s Seven Day Incidence is now 199.1. ‘Skyrocketing’ is the right word here. Just yesterday, the German capital’s Incidence was at 180, a week ago it stood at 141.6. In the Reinickendorf district, the situation has not been worse since the pandemic commenced. With an Incidence of 265.5, it is Berlin’s Corona hotspot. In Neukölln (236.7), things do not look much better. The same applies to Mitte (222.6), Spandau (216.8) and Pankow (201.9).

In neighboring Brandenburg, the situation is at least just as bad. The Incidence is at 210.6, and the province reports more than 1,000 new Coronavirus infections almost every day. Together with Saxony and Thuringia, Brandenburg is among the states with the lowest vaccination rate. The worrisome infection numbers could be connected to this fact. But while Brandenburg just hit the 200 mark in regard to its Incidence, Saxony and Thuringia are now above 400.

Thuringia’s First Minister Bodo Ramelow stated the “pandemic of the unvaccinated” was “a big subject” in his state. He predicted the hospitals there would reach their limit in the coming days. “We will have to send Corona patients to other states”, Ramelow said. At all of Thuringia’s schools, the mandatory mask rule will return on Monday. Booster vaccinations are being offered to all generations.

On Friday, Germany’s Health Minister Jens Spahn and his colleagues from the country’s sixteen states decided to provide “booster vaccinations for all”. The amount of available vaccine is not a problem anymore. Soon, vaccination centers, mobile vaccination teams and medical practices are supposed to give people those third vaccination shots which increase people’s protection against the spreading virus.

After several elderly people died in yet another local Corona outbreak at a care home, the ministers decided to tighten the rules for visitors at establishments of this kind. But there was no agreement on mandatory Corona vaccinations for caregivers and nurses. More effort is supposed to be put into enforcing the Corona rules, and hospitals will receive more support from the state if they have to postpone surgeries because they need to take care of a rapidly growing number of Corona patients. This already is the situation in some regions.

Germany has 412 counties. Five of them have Incidences above 700. They are Rottal-Inn (Bavaria), Sonneberg (Thuringia), Mühldorf am Inn (Bavaria), Sächsische Schweiz-Ostgebirge (Saxony) and Traunstein (Bavaria). One county is between 600 and 700, twelve have Incidences between 500 and 600, twenty-three are in their 400s and — generally — too many counties report extremely high infection numbers. Since yesterday, 34,002 new Coronavirus infections were reported for the entire country of Germany. It is the second-highest number of all time. The highest one was registered the day before yesterday.