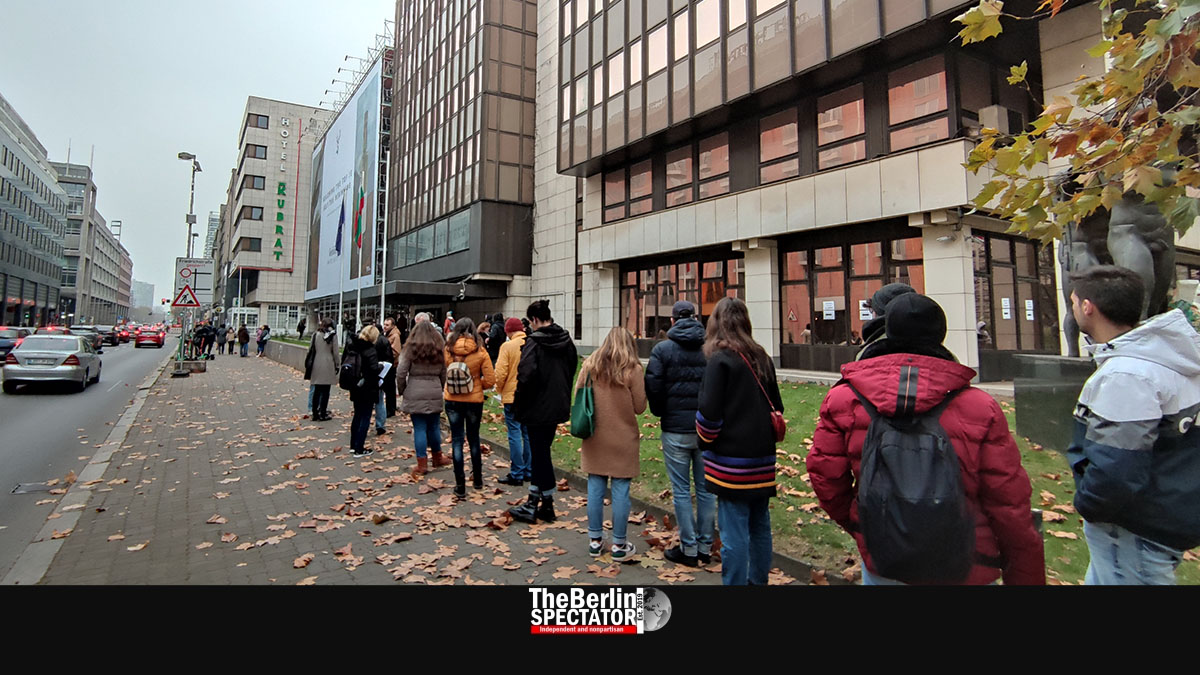 In Germany, thousands of members of the large Bulgarian community headed to polling stations that were set up for them today. They might live hundreds of miles from their country of origin, but they wanted to take part in the presidential and parliamentary elections down there.

Berlin, November 14th, 2021. Update: 8:43 p.m. CET (The Berlin Spectator) — There are many Bulgarians in Germany. Five years ago, there were about 200,000 of them. Since, this number probably grew further. They are professionals of all kinds, including scientists, nurses, musicians and workers, they are students, school kids and small children who go to kindergartens. Most adult Bulgarian expats follow what is going on in Bulgaria, and thousands of them intended to vote today. Both presidential and parliamentary elections took place in this Balkan country on Sunday.

Exactly 1,630 kilometers (1,013 miles) from the center of Sofia, in Berlin’s Leipziger Strasse, there is a “Bulgarian corner”. At its intersection with Glinkastrasse and Mauerstrasse, the Bulgarian Embassy can be found, a tiny Bulgarian Cultural Institute and the travel agency ‘Bulgarian Air Tour’, which mainly sells flight tickets for Bulgaria Air. Around the corner, a Bulgarian school teaches young expats on weekends. Bulgarian history and literature are part of the curriculum.

Today, the Embassy and the Cultural Institute opened its doors for Bulgarian voters. It is not the first time this year. In April and June, two rounds of parliamentary elections had been held, but no government could be formed. This is the third attempt. In the presidential elections, the incumbent President Rumen Radev has good chances to be reelected. If neither of the 23 candidates gets at least 50 percent of the vote, there will be a second round later this month.

But the parliamentary elections are far more complicated. The government of Prime Minister Boiko Borrisov, who cooperated with the ‘United Patriots’, a group of three extremist right-wing parties, governed until April. For many months, thousands of people in Sofia and other cities protested against the corruption this coalition was accused of. But, according to the latest polls, Borissov’s GERB will likely end up being the strongest party yet again, in spite of all allegations.

A party called ‘We Continue the Change’ (WCC), which is being run by the two former interim Ministers Kiril Petkov and Assen Vassilev, could come in second. Several thousand candidates of many parties are trying to become MPs. The parliament in Sofia has 240 seats.

Bulgaria is the poorest country in the European Union. Apart from the corruption, it has countless other huge problems:

>> Only some 25 percent of all Bulgarians are vaccinated against Corona.

>> Poverty is one of the biggest issues. Of course, it is connected to the corruption problem.

>> A reform of the justice system is badly needed.

>> The pollution in Sofia is terrible. In winter, the concentration of particulate matter in the breathing air is so high it literally kills.

>> In comparison, the terrible road and railway networks are a relatively small problem.

>> Another issue is brain drain. Many gifted Bulgarians leave because of the conditions and the low salaries in their country.

In front of the Bulgarian Embassy in Berlin, a lady told The Berlin Spectator it was important to her to have a say back home. It was the third time she stood in line there this year. The Bulgarian communities in the United Kingdom and in Turkey are even larger than the one in Germany. Bulgarian polling stations were set up there too. There are more than 80 of them in Germany, more than 100 in Turkey and more than 120 in the U.K..